Although Medicare covers a large share of medical expenses for people age 65 and older, many of these elderly Americans are still exposed to substantial out-of-pocket costs. Long-term care and prescription drugs are generally not covered by Medicare, and beneficiaries must shoulder the program's premiums, copayments, and deductibles. Some choose to insure against Medicare's cost-sharing by purchasing a Medicare Supplemental Insurance Policy, also known as Medigap.

In 1993, 36 percent of all beneficiaries held individually purchased Medigap policies.1 This study examines how changes in underwriting, premium rating practices, and increases in premium rates are affecting the accessibility and affordability of Medigap insurance.

Laws enacted as part of the Omnibus Budget Reconciliation Act of 1990 (OBRA-90) have simplified consumers' ability to choose health insurance policies and established important consumer protection features. The OBRA-90 legislation authorized development of ten standardized Medigap plans (A through J) to address concerns about duplication of benefits, consumers' ability to compare policies, and policies that offered little value. However, insurers still have flexibility in determining whether they will allow individuals with certain health conditions to purchase a policy (through underwriting criteria) and in structuring premium rates. These underwriting and rating methods greatly influence beneficiaries' access to coverage and the premiums that companies can charge for policies.

Standardization of policy offerings has limited the ability of insurers to compete on the basis of most policy features, thereby creating more pressure for competition based on price. By inducing more insurers to deny policies to individuals with certain health conditions and to price policies to appeal to 65 year olds (but to increase rates as they grow older), this price competition could affect access to coverage.

This report addresses concerns about the ability of older people to access Medigap policies through two strategies: interviews with 22 insurers nationwide with large Medigap market shares, and insurance department filings of top-selling Medigap insurers in Arizona, Ohio, and Virginia. These states were chosen because they did not have regulations beyond those required by the OBRA-90 legislation that could limit market competition.

A review of policies and discussions with insurers indicated that changes in market forces have affected consumers' ability to access Medigap policies in the following ways:

Almost all Medigap insurers screen for health conditions before underwriting a policy, severely limiting access for some individuals. In particular, those with cancer, heart disease, Alzheimer's disease, Parkinson's disease, diabetes, stroke, and respiratory conditions may have difficulty purchasing a policy.

The majority of insurers, in an apparent attempt to attract younger purchasers, now structure premiums to increase automatically as the policyholder ages (attained-age rating). A review in the three study states showed that attained-age policies have become the norm in the Medigap market. Nationwide, in 1996, 39 Blue Cross/Blue Shield companies (57 percent) sold policies on this basis. Fifteen of these companies (22 percent) used issue-age rating based on age at the time of purchase, and 14 (21 percent) used community rating, in which policies were not based on age. In many markets, only AARP offered community-rated policies.

Consumers may not understand that rates will increase as they grow older and have less ability to pay, and may choose the policy offering the lowest premium at their current age. On average, the attained-age premium for the most popular plan, Plan F, accounted for 4.6 of income at age 65, rising to 10.6 percent of income at age 80 (see Figure 1). 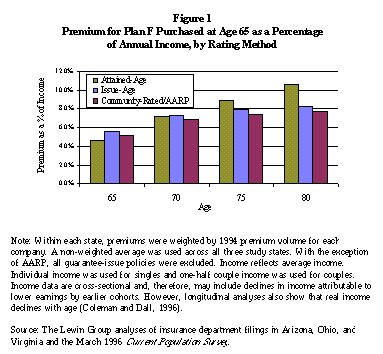 A review of filings by the top-selling companies in three states revealed that premium rates increased substantially from 1995 to 1996, after remaining relatively flat compared to inflation from 1992 to 1995 (see Figure 2).

Interviews with large insurers nationwide suggested that while rates vary widely, almost half of Medigap insurers have implemented substantial increases over the past two years. Of the company representatives willing to project the increase in premium rates for the near future, nearly 70 percent cited double-digit annual increases. 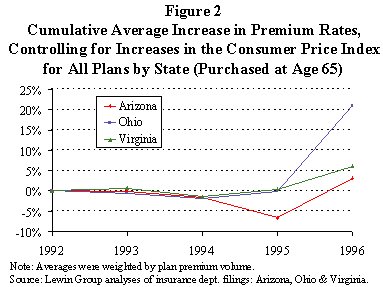 AARP Prudential, the company with the largest market share and frequently the only community-rated, guarantee-issue option (available to everyone age 65 and older at the same premium regardless of health), increased its rates substantially in 1996 after holding them level for three years. These increases averaged 27 percent nationwide and 23 percent in the three states visited as part of this study.2 AARP further increased rates by an average of 13 percent nationwide in 1997. Analyses also indicated a trend toward higher rates in 1996 beyond the effect of the AARP increases. Some insurers and regulators interviewed speculated that the AARP increases gave other companies the latitude to increase their rates.

A review of insurance department filings in three states revealed that, depending on the state and policy type, premiums in 1996 ranged from being affordable to the vast majority of consumers (annual premiums of $402) to affordable to very few consumers (annual premiums of $7,196). Premiums reviewed varied by plan type, consumer age, and state. Premiums for the same plan at the same age also varied substantially within states.

The Effect of Standardization on Pre-Standardized Policies

The Effect of Medicare Managed Care on Medigap Insurance

At the end of 1996, nearly 13 percent of Medicare beneficiaries were enrolled in a health maintenance organization (HMO). The Congressional Budget Office projects that this figure will grow to 20 percent by the year 2000 and to 35 percent by 2007. Three-quarters of the companies interviewed reported a decrease in sales that they attributed to the growth of Medicare managed care. Of these companies, three-quarters reported that drops had been substantial. The remaining one-quarter of companies generally believed that HMOs will strongly affect sales in the near future.

The Lewin Group's analyses of the Medicare Current Beneficiary Survey show that Medicare HMOs appeal most to younger, healthier individuals, and least to those with functional impairments. If primarily less healthy individuals are left with Medigap policies, their premiums may rise, encouraging even greater HMO enrollment among healthier Medicare beneficiaries. Recent Medigap premium increases were cited by insurance counselors as one reason beneficiaries switch to Medicare HMOs.

The trends described above will most directly affect older Medicare beneficiaries, especially those with health conditions. Their access to Medigap insurance may be threatened by the decreasing affordability of policies sold regardless of health status, especially those priced the same regardless of age. Community-rated, guarantee-issue policies may become the only option for older consumers and those with health conditions, yet the likelihood of companies offering these policies may dwindle.

The size of AARP's client pool and the number of new Medigap applications that AARP receives as a result of its unique market position may buffer against spiraling rate increases. Prudential representatives contend that, for the most part, recent increases were not caused by worse-than-expected claims.

Potential changes in AARP policies, such as discontinuing guarantee-issue policies or substantially increasing premiums, would most directly affect older, physically vulnerable consumers. An 80 year old with health conditions in the three study states, for example, would pay from 41 to 70 percent more in premiums to get the same plan from a company other than AARP.

Consumer education and legislation could address the complex issues raised in this report in a number of ways. The Health Care Financing Administration (HCFA), for instance, could provide information and other outreach efforts to help consumers understand the implications of different rating methods.

On the legislative front, rating structures could be standardized through such measures as requiring that all policies be sold on an issue-age or community-rated basis. As of May 1997, six states have mandated community rating and two states have mandated issue-age rating. Legislation could also expand enrollment opportunities for those who wish to switch plans or switch back from Medicare HMOs to Medigap. Two states currently mandate continuous open enrollment, and three states mandate annual open-enrollment periods.

While these measures may increase access to Medigap in the short run, they could exacerbate the problem of the healthier elderly choosing Medicare HMOs over Medigap, thereby increasing Medigap premiums. An important step for public policy aimed at reforming insurance markets would be an explicit acknowledgment that changing the nature of competition in one aspect of the market may affect the nature of competition in another (i.e., standardizing features may alter rating practices). In addition, the experience of pre-standardized plans suggests that future legislation should avoid precluding new entrants into existing risk pools.

1 Twenty-nine percent of beneficiaries have employer-provided supplemental benefits. These policies are not considered in this report.

2 These numbers reflect weighting plans by premium volume in 1994 within states, but using a simple average across states.