One of the least controversial features of the health care reform legislation currently before Congress is the health insurance exchange. The concept of the exchange has support across much of the political spectrum, and the final House and Senate bills both contain, and have always contained, an exchange. The apparent widespread agreement, however, conceals a deeper lack of consensus on how the exchange should be designed institutionally and how it should function. The absence of a vigorous debate about the exchange concept, moreover, has contributed to a lack of focus on the exact nature and function of an exchange.

A health insurance exchange is basically an organized market for the purchase of health insurance. The exchange is intended to play a number of roles in health care reform. First, it is expected to be the locus of "managed competition" among health insurance plans. It is hoped that this competition will make health insurance more affordable and thus more accessible. Second, the exchange is expected to create a sizable risk pool that will allow insurance risk to be more efficiently managed, reducing the incidence of adverse selection (by the insured—see p. 27) and the practice of risk selection (by insurers). Third, it is hoped that the exchange will reduce administrative costs by simplifying marketing and eliminating risk-based underwriting. Fourth, the exchange offers the possibility of making health insurance markets more transparent and of facilitating consumer choice among health insurance plans by providing more and better information about health insurance options. Fifth, the exchange may play a regulatory role, helping to make insurers more accountable. In particular, it could serve as a forum for reallocating risk among insurers and for guaranteeing that those insurers sell comprehensive health coverage with manageable cost-sharing, that they market their plans fairly, and that they respond properly to consumer claims and complaints. Sixth, the exchange will likely play a role in facilitating other key features of the health care reform legislation, such as the payment of premium credits or perhaps even the imposition of the individual or employer mandates.

Whether the exchange will effectively perform these functions, however, depends entirely on the institutions established to administer it; the functions, responsibilities, and authority it is afforded; its regulatory environment; and the structure of the markets in which it operates. We have, in fact, had a lot of experience with exchanges—also called purchasing cooperatives or health alliances—and much of that experience has been discouraging. In the past, exchanges have often had a difficult time attracting enough members or insurers to function efficiently, and have become targets of adverse selection. They have rarely been able to achieve their promise of significantly reducing the cost of insurance premiums or increasing access to health care. With this in mind, Congress needs to be careful in its policy choices in order to optimize the chance of success.

This paper first examines the role of the exchange in a reformed health care system, explores our experience with exchanges and what we can learn from it, describes the different approaches to exchange design and function taken by the House and Senate bills, and concludes with an examination of the policy issues raised by the pending legislation. The descriptions of the bills' provisions are summarized in the table at the end of this section.

The major policy issues that must be addressed in creating exchanges are:

Should the exchange be established at the federal or at the state level?

Insurance regulation has traditionally been a state function, and a number of states have had experience running exchanges. Establishing exchanges at the state level also would promote experimentation and responsiveness to localized concerns. On the other hand, health care reform is a national effort to create a nationwide reform. The Constitution does not permit Congress to "commandeer" the states to carry out the reform, and any attempt by the federal government to oversee state implementation of the reforms would be awkward at best, ineffectual at worst. The federal government has in fact had quite a lot of experience running exchanges like the Federal Employees Health Benefits Program. A national exchange could ensure uniform nationwide availability, with the capacity to assist those families that work or live in several states. There is also concern as to whether all states have the resources and willpower to be sufficiently aggressive in regulating insurers. A single national exchange with a local presence (perhaps through Social Security offices) is perhaps more likely to be implemented successfully.

How can the plan be protected against adverse selection?

The Achilles' heel of many earlier exchanges has been adverse selection—exchanges tend to attract (or to have dumped upon them) sicker and more costly enrollees. The obvious solution to this problem is to prohibit those individuals or groups who are eligible for insurance sold through the exchange from buying insurance anywhere else. Measures can be taken, however, to limit adverse selection even if insurance continues to be sold outside the exchange. First, exchanges should be opened up to all individuals and to groups large enough to give the exchange a viable risk pool. Second, plans inside and outside the exchange should have to play by the same rules and charge the same premiums. Third, there should be implementation of risk-adjustment or reinsurance schemes covering insurers inside and outside the exchange to assure that plans attracting low risks compensate those that attract high risks. Finally, employers and insurers can be regulated to discourage them from steering bad risks into exchange plans.

How can the exchange contribute to standardization and transparency?

Exchanges can facilitate consumer choice by requiring all insurers that market policies within the exchange to cover the same essential benefit package and to provide insurance in standardized tiers of coverage for easy comparison. Exchanges also can require insurers to make available to consumers standardized information about a whole range of plan features and limitations (such as benefit coverage, cost-sharing obligations, exclusions, network providers, out-of-network costs, and information about consumer complaints, disenrollments, and satisfaction) to assist consumers in identifying and purchasing the coverage they need and can afford. This information should be made available in plain language and in a culturally and linguistically appropriate manner. Finally, exchanges should make available financial information concerning plans such as medical loss ratios or justifications offered for premium increases, in order to improve the public accountability of insurers.

What can an exchange do to reduce administrative costs?

One of the promises of exchanges is that they can reduce the costs of administering health insurance. That promise can be fulfilled if an exchange reduces the costs of marketing insurance and of enrolling members and eliminates the cost of risk underwriting. Another significant cost-cutting opportunity lies in the reduction or elimination of brokerage commissions, as the role of brokers in the individual market should be reduced or eliminated by the exchange. To succeed at reducing administrative costs by eliminating duplication of effort, however, the exchange needs to provide insurers with a large enough group of exchange-based enrollees so that the insurer can comfortably cease providing itself to those enrollees the services the exchange offers. Finally, a national exchange would save money by avoiding the duplication of functions that state exchanges will create.

What avenues should the exchanges provide for appeals and judicial review?

Exchanges will make a host of legal determinations, such as deciding which insurers, individuals, and employers can participate in the exchange. Exchanges may also play a role in deciding eligibility for subsidies or compliance with individual or employer mandates. Insurers that participate in the exchange will, of course, adjudicate claims and respond to grievances. Procedures need to be in place for providing administrative and, when necessary, judicial review for these determinations.

How can the exchanges control cost?

It is hoped that exchanges will not only facilitate access to health care but also help control growth in health care costs. The primary route through which they may do so is "managed competition" among insurers as standardization and transparency of offerings drives insurers toward price competition. The presence of a public plan in the market could in particular encourage private insurers to offer more competitive prices. An exchange also could offer insurers a large number of purchasers and perhaps receive discounts in return. Finally, an exchange could negotiate with insurers to bring down premiums or refuse to permit those that unreasonably or excessively increase premiums to participate in the exchange. Cost control in the exchange is particularly important because many of its participants are going to be lower- or middle-income Americans who were previously unable to afford health insurance, and much of the cost of their insurance is going to be borne by the taxpayers through premium and cost-sharing subsidies. All available approaches to controlling costs should be pursued.

Over the next days and weeks, Congress will finalize legislation that will significantly change the way in which we finance health care in the United States. The health insurance exchange concept will almost certainly play a role in this reform. The exchange holds real promise as a tool of health policy, but as is almost always the case in public policy, the devil will be in the details of design and function. The two bills enacted by the House and Senate contain a host of good ideas that Congress can work with in putting together a final bill. There is, however, much that could be improved. It is to be hoped that this analysis will prove useful in the pursuit of that goal. 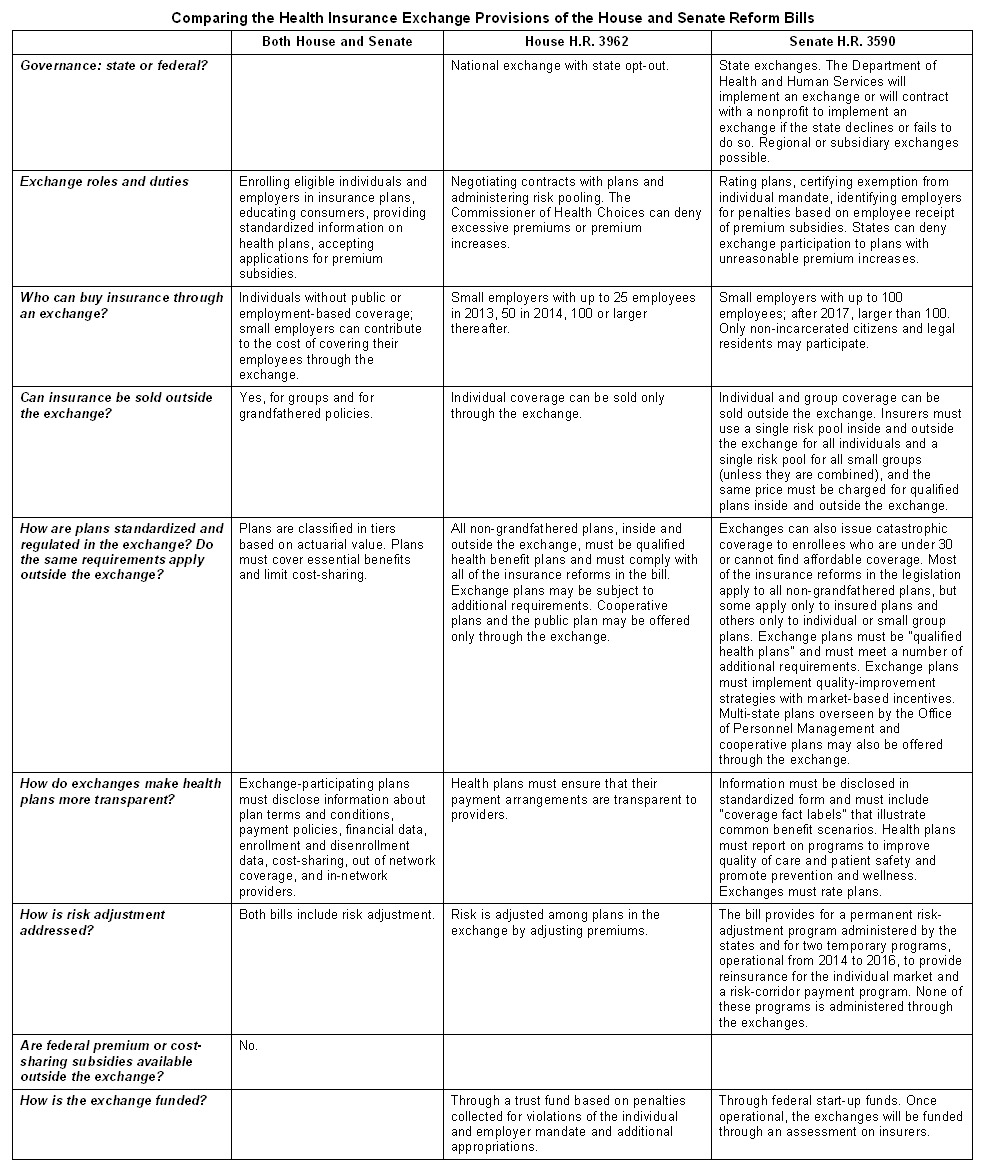