The Affordable Care Act requires the establishment of new health insurance marketplaces—known as individual exchanges and Small Business Health Options (SHOP) exchanges—in each state. States must make complex decisions about how to design their exchanges in ways that reflect the unique needs of their consumers and insurance market. This report examines key structural, operational, and policy decisions made by 17 states and the District of Columbia that chose to establish a state-based exchange for 2014.

Ten states and the District of Columbia established a quasi-governmental entity to govern the exchange, with the others choosing private nonprofits or state agencies to house the exchange. Most exchanges can write rules to govern their operations. Seven states and the District of Columbia remain undecided on their long-term revenue source; most of the remaining states will assess insurers that offer coverage in the exchanges. State officials reported that decisions in these areas often reflected compressed timelines, political realities, and the state’s long-term vision for the exchange. 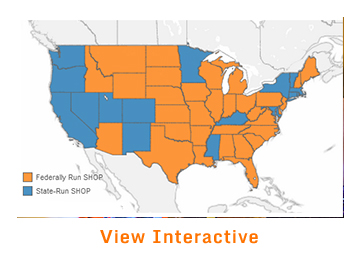 More than half of states selectively contracted with insurers or managed plan offerings. Ten states and the District of Columbia adopted formal requirements regarding exchange participation or alignment of coverage options inside and outside the exchange. These mechanisms include establishing a single marketplace, prohibiting insurers from entering the exchange if the insurer did not participate in 2014, and requiring insurers to offer the same coverage inside and outside the exchange. States also negotiated informally with insurers to encourage participation and aligned exchange standards with existing market standards to maintain a level playing field. State officials adopted these approaches to spur competition and limit adverse selection within and against the exchange.

Nine states limited the number of plans per insurer or required insurers to offer some standardized plans in the exchange. Of the remaining states, only two and the District of Columbia adopted a meaningful difference standard of review to ensure that plans are substantially distinct from other plans offered in the same market by the same insurer. State officials reported that these limits were designed to give consumers a manageable number of choices while also retaining flexibility for insurers. Despite federal delays in quality requirements until 2016, nine states plan to display quality data on the exchange in 2014 and 10 states intend to develop quality rating systems ahead of federal guidance. State officials expect quality improvement and innovation to be an ongoing priority for exchanges.

Every state defined “small employer” as 50 or fewer full-time employees; only three chose to merge the individual and small-group markets. Despite a delay in federal requirements, nearly all SHOP exchanges are expected to offer “employee choice” options that give employees a choice of more than one plan, and eight states provided maximum flexibility by allowing employers to give employees the choice of any plan on the SHOP exchange. State officials emphasized the importance of employee choice models for ensuring that the SHOP exchange is attractive to small employers and sought to balance the goal of meaningful employee choice with concerns about adverse selection.

Thirteen states and the District of Columbia established both a navigator and in-person assistance program while two states will operate only a navigator program for 2014. An additional two states have not yet finalized their approach and continue to consider whether their exchanges will operate navigator and/or in-person assistance programs for 2014. To initially fund navigator programs, nine exchanges planned to use state funds or private grants until exchange funds become available. Every exchange allowed producers—otherwise known as or agents and brokers—to help consumers enroll through the exchange. While some exchanges planned to set and pay commissions, most allowed insurers to set producer compensation. State officials reported that navigators, in-person assisters, and producers will be critical to exchange success in 2014.

While states with federally facilitated exchanges can influence the way some exchange functions are performed, states operating their own exchanges had significant flexibility in designing their exchanges to meet state needs. Overall, states made significant progress in structuring and operationalizing their exchanges, and made design decisions with an eye toward minimizing market disruption, promoting exchange viability, and providing value for consumers.

States also built on—and, in some areas, exceeded—minimum federal requirements to accomplish policy objectives. With much at stake in 2014, these design decisions are expected to affect critical outcomes, such as enrollment, cost, consumer experience, and sustainability. While states made significant progress, many will continue to adjust their design decisions in response to implementation successes and challenges. Continued monitoring and evaluation of exchange design decisions will be critical to inform future exchange implementation.