With the implementation of the Affordable Care Act, Medicaid has become the largest insurer in the United States, covering almost 25 percent of all Americans.1 State Medicaid agencies are leveraging Medicaid’s purchasing power to drive reform of the delivery system to benefit Medicaid patients and ultimately all patients. One powerful tool available to states is the Delivery System Reform Incentive Payment (DSRIP) program authorized under Section 1115 of the Social Security Act (i.e., the law that authorizes Medicaid). To secure DSRIP funds, states must articulate a clear vision and plan for reforming their payment and delivery models, integrating care across providers and settings, and advancing the “Triple Aim” of better care, better health, and reduced costs.

In April 2014, the Centers for Medicare and Medicaid Services (CMS) approved New York’s $8 billion Medicaid Redesign Team waiver amendment. Of the waiver funds, $6.42 billion are designated for DSRIP (Exhibit 1).2 Aside from this, CMS and the state have allocated an additional $1.83 billion to DSRIP, bringing total DSRIP funds to $8.25 billion.3 In addition, the state is funding a $1.5 billion Capital Restructuring Financing Program to “help strengthen and promote access to essential health services.”4 Seven other states (Alabama, California, Kansas, Massachusetts, New Hampshire, New Jersey, and Texas) also are implementing DSRIP initiatives. Additional states are in negotiations with CMS regarding approval of a DSRIP waiver or have expressed interest in pursuing a DSRIP program. The design and planning of these new programs will be shaped by the experiences of the early implementers. 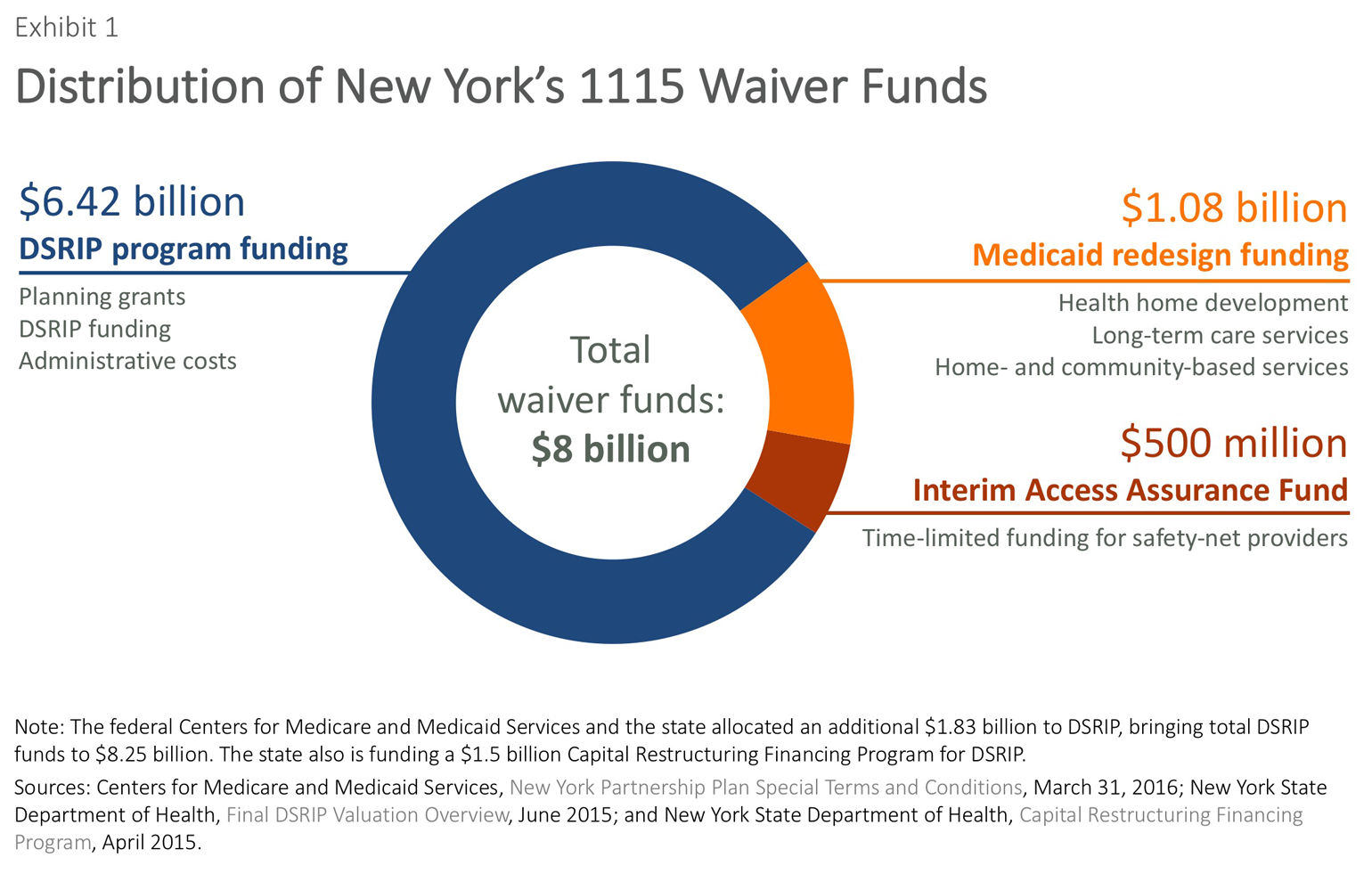 "It is of compelling public importance that the state conduct a fundamental restructuring of its Medicaid program to achieve measurable improvement in health outcomes, sustainable cost control, and a more efficient administrative structure."

New York’s DSRIP began in April 2014 and will continue through March 31, 2020 (Exhibit 2). The goal of New York’s DSRIP is to “reduce avoidable hospital use by 25 percent through transforming the New York State health care system into a financially viable, high performing system.”5 At the outset, New York required Medicaid providers and community-based organizations to form integrated delivery networks, referred to as Performing Provider Systems (PPSs) as a condition of receiving DSRIP funding. Today, 25 PPSs are implementing a range of projects to build care management and population health management infrastructure, enhance disease management programs for targeted chronic conditions, and improve population health. Payment reform is a central component of the New York DSRIP. To ensure that its investments in delivery reforms are sustained in the long term, New York is requiring that by the end of the five-year DSRIP waiver at least 80 percent of payments between Medicaid managed care plans and providers use value-based methodologies. 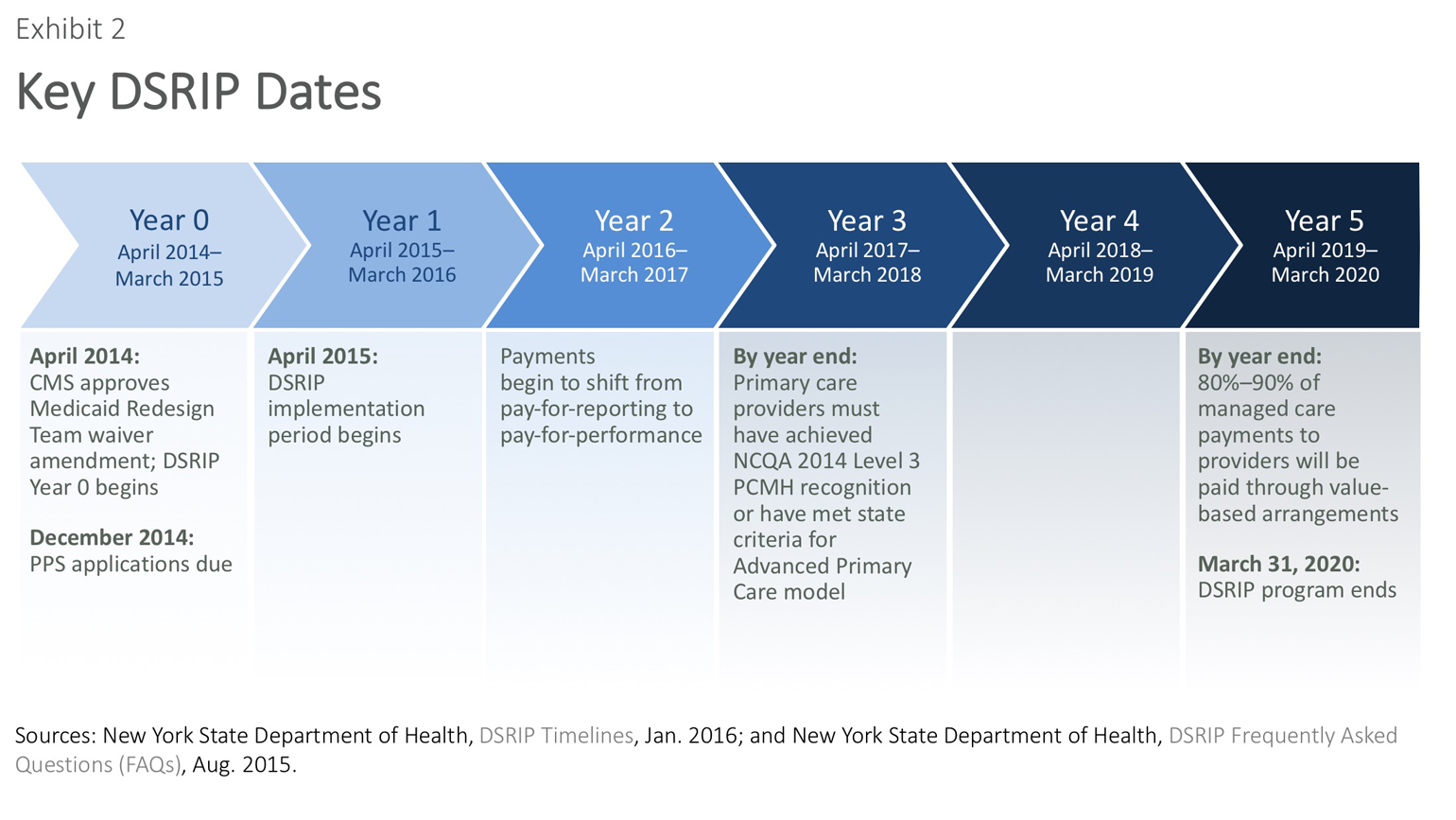 CMS officials have been clear that New York’s waiver is the new baseline for states pursuing DSRIP initiatives (Exhibit 3). This fact, combined with the magnitude of change contemplated in New York, has grabbed the attention of Medicaid stakeholders across the country.

This report examines New York’s experience implementing its DSRIP waiver to identify emerging issues enabling or impeding Medicaid transformation. Findings are informed by two rounds of interviews: the first with federal and state officials and thought leaders from national health care organizations, and the second with New York stakeholders involved in on-the-ground implementation efforts, including leaders from provider entities, health care trade organizations, and health plans. (See Appendix A for a full list of individuals interviewed.)

This report focuses on five areas that have broad implications for stakeholders pursuing Medicaid-driven delivery system reform, with or without a DSRIP waiver: organization, governance and market transformation; care model and social determinants of health; data-sharing and analytics; measurement and accountability; and value-based payment (VBP) arrangements and sustainability. Across each of these topics, we describe the New York approach, assess the early successes and challenges, and identify how New York’s experiences can influence new state payment and delivery system reform initiatives.