This analysis compares access to affordable health care across U.S. states after the first year of the Affordable Care Act’s major coverage expansions. It finds that in 2014, uninsured rates for working-age adults declined in nearly every state compared with 2013. There was at least a three-percentage-point decline in 39 states. For children, uninsured rates declined by at least two percentage points in 16 states. The share of adults who said they went without care because of costs decreased by at least two points in 21 states, while the share of at-risk adults who had not had a recent checkup declined by that same amount in 11 states. Yet there was little progress in expanding access to dental care for adults, which is not a required insurance benefit under the ACA. Wide variation in insurance coverage and access to care persists, highlighting many opportunities for states to improve.

On January 1, 2014, the major health insurance reforms of the Affordable Care Act (ACA) took effect. They represented the most significant expansion of health coverage in the United States since Medicare and Medicaid were enacted more than 50 years ago. By the end of 2014, the uninsured rate for the U.S. population under age 65 had declined to 13 percent from 17 percent a year earlier, and a dramatic shift in the landscape of coverage had taken place across the country, according to data recently released by the U.S. Census Bureau (Exhibit 1, Appendix Table 1). 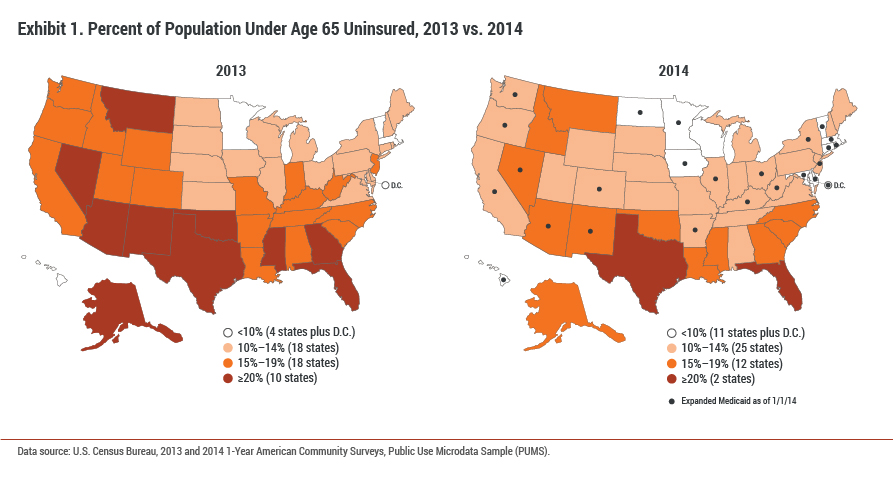 This analysis takes a closer look at this shift by comparing states’ performance on six indicators of access to care and affordability from The Commonwealth Fund’s State Scorecard on Health System Performance, 2015 Edition. The scorecard is intended to help policymakers, health system leaders, and the public identify opportunities, and set targets, for improvement. The indicators include uninsured rates for working-age adults and for children, and three others that assess adults’ access to care (Exhibit 2).1 To gauge the affordability of care, we examine the percentage of individuals under age 65 in each state who have high out-of-pocket medical costs relative to their incomes.2 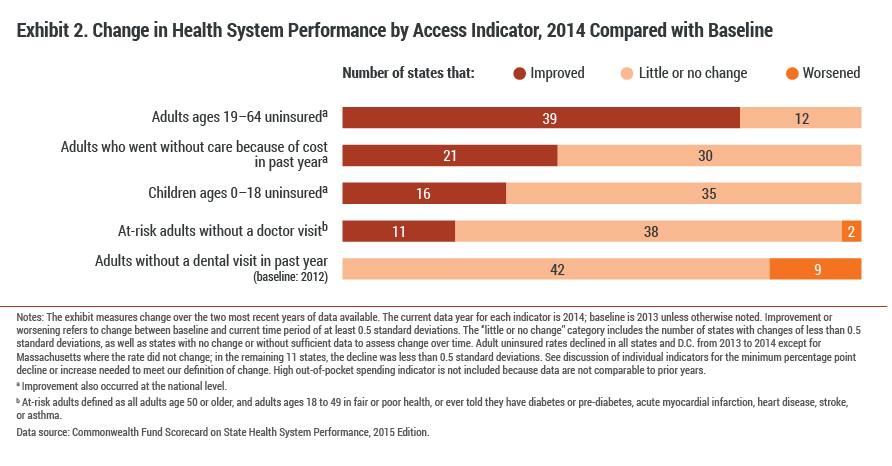 Uninsured rates for adults ages 19 to 64 declined in nearly all states from 2013 to 2014—dropping by three or more percentage points in 39 states.3 The largest declines were in states that had expanded their Medicaid programs as of January 2014: Kentucky (decline of nine points); California, New Mexico, Oregon, Rhode Island, Washington, and West Virginia (seven points); and Arizona, Arkansas, and Nevada (six points). Even some states that did not expand Medicaid by January had four- to five-point declines, including Florida, Georgia, Idaho, Michigan,4 Montana,5 North Carolina, Oklahoma, South Dakota, and Texas. Still, widespread variation in uninsured rates persisted, ranging from a low of 5 percent in Massachusetts to a high of 26 percent in Texas. Nevertheless, only 10 states had adult uninsured rates of 20 percent or higher in 2014, compared with 22 states in 2013 (Exhibit 3, Appendix Table 1). 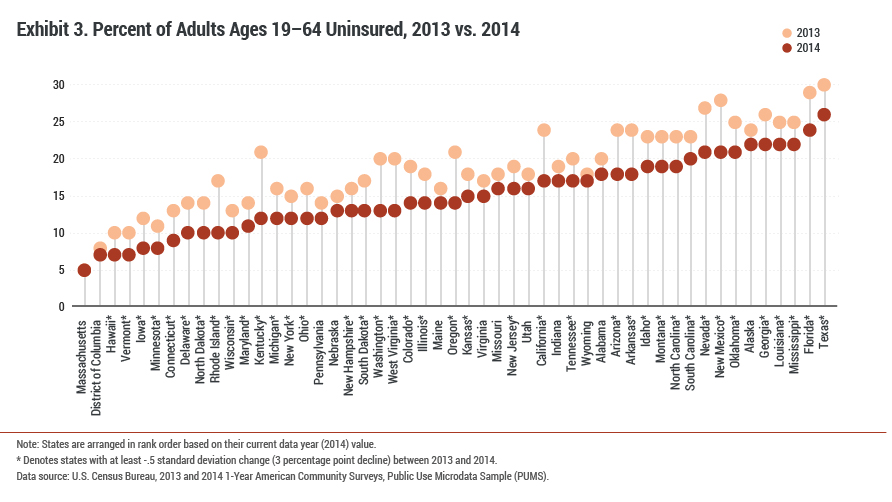 Uninsured Rates Among Low-Income Adults Decline in Every State

Historically, the overwhelming majority of the uninsured have lived in households with low incomes (below 200 percent of the federal poverty level).6 From 2013 to 2014, the share of low-income adults who were uninsured dropped three percentage points or more in every state except Maine, which had a two-point decline (Exhibit 4, Appendix Table 2). The largest declines were in Kentucky (18 points), Washington (16 points), West Virginia (15 points), Oregon and Rhode Island (14 points) and Nevada (13 points)—all states that had chosen to expand Medicaid eligibility by January 2014. And in 2014, most expansion states had lower rates of uninsured low-income adults than did nonexpanding states. 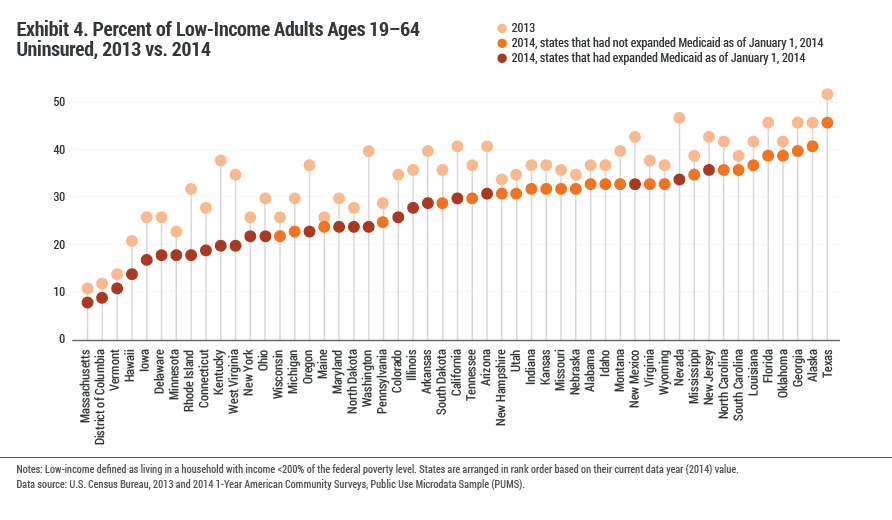 There remained nearly sixfold variation across states in uninsured rates among low-income adults, however, ranging from 8 percent in Massachusetts to 46 percent in Texas. But there was notable improvement in many states with high rates of uninsured residents: by 2014, only three states had uninsured rates of adults with low incomes that were 40 percent or more (Georgia, Alaska, and Texas), compared with 15 states in 2013.

Even before the ACA’s passage, uninsured rates among children were much lower than for working-age adults in every state because of action taken over two decades by federal and state policymakers to expand public health insurance programs for children.7 In 2014, the percentage of uninsured children 18 years and younger declined still further in a majority of states, and by at least two points in 16 states. Only two states (Alaska and Texas) had children’s uninsured rates above 10 percent, compared with seven states in 2013 (Exhibit 5, Appendix Table 1). 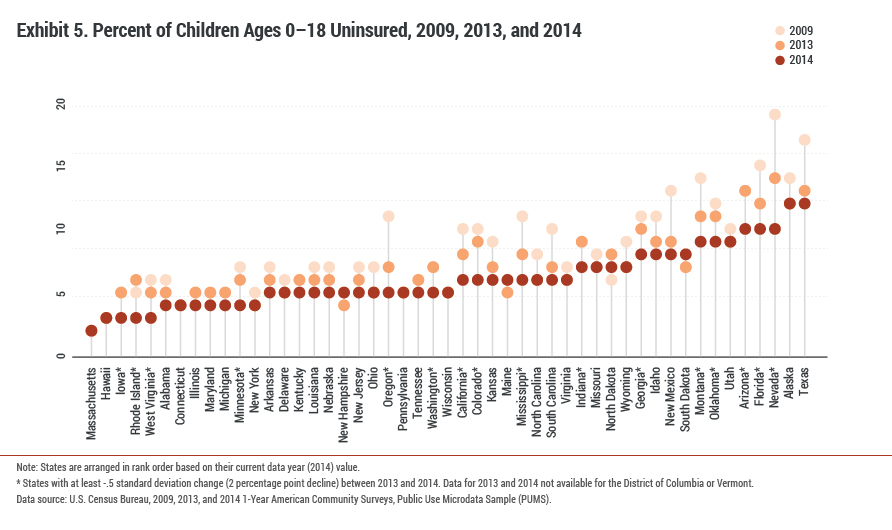 As was the case with coverage gains among adults, coverage gains among children reflect both the ACA’s new expanded coverage options and the so-called “woodwork effect,” in which people who were previously eligible for the program but not enrolled “came out of the woodwork” and signed up for Medicaid, as a result of increased outreach efforts, awareness of the law and its coverage options, and the requirement that everyone have health insurance.8

Many people with no or inadequate insurance coverage skip needed care or struggle to pay medical bills.9 One of the central aims of the ACA is to improve access to care by removing financial barriers. From 2013 to 2014, the share of adults (age 18 and older) who said they went without care because of costs declined by at least two percentage points in 21 states. This is likely a result of expanded insurance coverage as well as improvements in the economy.

The percentage of adults reporting cost barriers to care was lowest (7%–10%) in North Dakota, Massachusetts, Hawaii, Iowa, Minnesota, Vermont, and South Dakota, in both 2014 and 2013. From 2013 to 2014, such rates declined by three points in four states in the lowest performance quartile on this indicator: Louisiana, Arkansas,

Many of those with no health coverage must pay the full amount of medical bills.11 But even many insured patients are paying an increasing share of their medical care costs.12 We examined the share of individuals under age 65 who, regardless of insurance status, lived in households that spent a high share of annual income on medical care. We used two thresholds to identify such individuals: People living in households in which 10 percent or more of annual income went toward medical care; or 5 percent or more, if annual income was below 200 percent of the federal poverty level.

During 2013–14,13 at least one of 10 people under age 65 in every state lived in households where out-of-pocket spending on medical care was high relative to annual income. In five states this was true for at least one of every five nonelderly individuals: Mississippi and Oregon (20%), Arkansas (21%), and Idaho and Tennessee (22%) (Exhibit 6, Appendix Table 1).

We also assessed access to routine care for adults who could be at greater risk for adverse health outcomes if they do not receive care. This at-risk group includes everyone age 50 and older, since many have chronic conditions and need preventive care, as well as the subset of younger adults who report having chronic illnesses or being in fair or poor health.

From 2013 to 2014, 11 states experienced at least a two-percentage-point reduction in the share of at-risk adults who did not visit a doctor for a routine checkup in a two-year period. The greatest improvement (four points) was seen in Oregon and Rhode Island. Yet in 2014, greater than twofold variation in performance between eastern and western states persisted. Rates were less than 10 percent in Rhode Island, Maryland, Massachusetts, the District of Columbia, New Jersey, and West Virginia. In contrast, 19 percent to 22 percent of at-risk adults had not seen a doctor for two years for a checkup in Oklahoma, Utah, Idaho, Wyoming, and Alaska (Exhibit 7, Appendix Table 1).

Improvements in access to routine care for these adults may be the result in part of the ACA’s insurance expansions and market reforms, as well as the law’s Medicare provisions, including the introduction of free annual wellness visits and the closing of the “doughnut hole,” or gap in coverage, for prescription drugs.

Many experts, including a former U.S. Surgeon General, have noted that oral health is integral to overall health and well-being.14 In the U.S., however, dental care traditionally has been covered under a separate policy than medical coverage. Under the ACA, health plans in the marketplaces must offer dental coverage for children, but are not required to do so for adults. Similarly, Medicaid and the Children’s Health Insurance Program are required to provide dental benefits for children, but states can choose whether to extend dental coverage to adults.

In 2014, in all states, at least one of nine adults age 18 and older (11%) had gone a year or more without visiting a dentist, dental hygienist, or dental clinic. This is essentially unchanged from 2012 (the most recent year with comparable data). In the worst-performing states on this indicator in 2014 (Louisiana, Mississippi, Texas, and West Virginia), one of five adults went without dental care for a year or more (Exhibit 7, Appendix Table 1). According to the State Scorecard on Health System Performance, 2015 Edition, West Virginia and Mississippi had among the highest rates of adults under age 65 missing six or more teeth because of tooth decay, infection, or gum disease (22% and 19%, respectively, in 2014).15 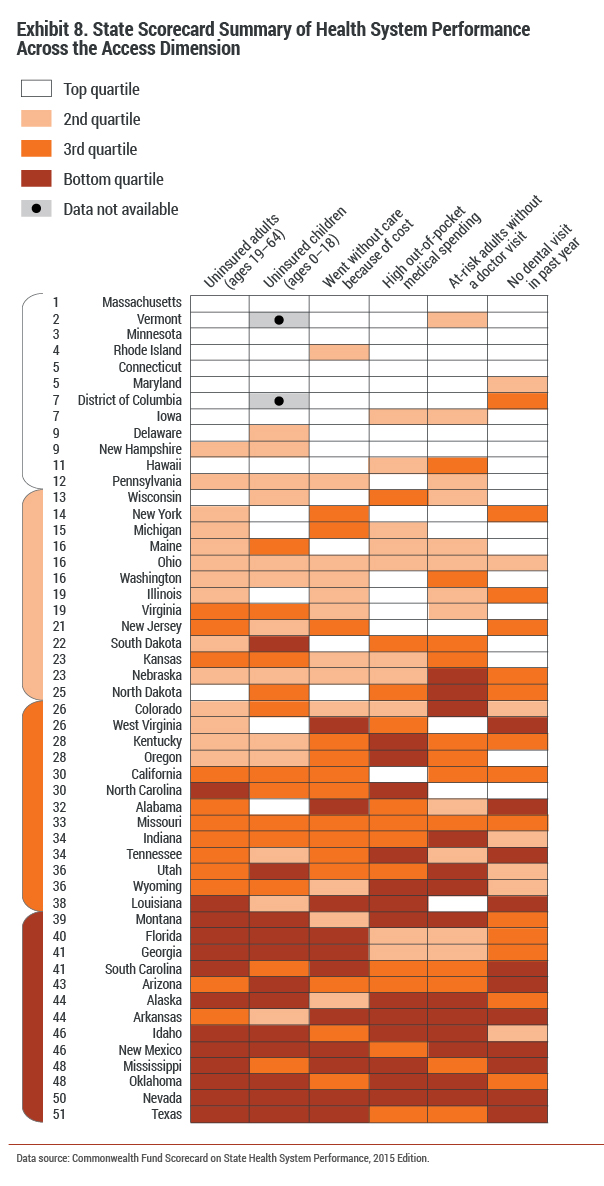 In the area of health care access and affordability, the top-ranked states in the 2015 scorecard (Massachusetts, Vermont, Minnesota, Rhode Island, and Connecticut) have also all been leaders in one or more previous scorecard editions (2014, 2009, 2007). Maryland moved into the top quartile of performance in access for the first time this year. However, even the leading states did not perform consistently well or improve across all indicators (Exhibit 8).

Several states in the bottom quartile of performance showed the greatest absolute improvement on some indicators. For example, New Mexico, Arizona, Arkansas, and Nevada were among the states with the largest percentage-point declines in the uninsured rate for working-age adults (six to seven points), and Nevada and Arizona had among the greatest reductions in uninsured rates for children age 18 and younger (four- and three-point declines, respectively). In addition, Arkansas, Florida, and Mississippi (along with Louisiana, ranked at the bottom of the third quartile) were among only a handful of states that saw declines of three points in the share of adults who went without care because of costs.

During the ACA’s first year of health coverage expansions, an estimated 8.8 million Americans gained health coverage.16 The largest absolute gains were in states that chose to expand eligibility for their Medicaid programs by January 2014. While more states have done so since, several populous states have not—leaving them with some of the nation’s highest uninsured rates. If the 20 states that have still not expanded their Medicaid programs were to do so, an estimated 3.1 million fewer people would be uninsured in 2016.17

Despite the coverage gains in 2014 and the reduction in the number of adults who reported they went without care because of costs, there remains wide variation among states in residents’ access to affordable care. If all states were to achieve the benchmarks set by top-performing states, we estimate that an additional 24 million people under age 65 would gain coverage and nearly 17 million fewer adults would forgo care because of costs.18

Continued monitoring of state trends in health care access and affordability will be necessary to determine whether the ACA is achieving its goals of near-universal coverage and lower financial barriers to care.