Issue: The number of Americans insured by Medicaid has climbed to more than 70 million, with an estimated 12 million gaining coverage under the Affordable Care Act’s Medicaid expansion.1,2 Still, some policymakers have questioned whether Medicaid coverage actually improves access to care, quality of care, or financial protection.

Goals: To compare the experiences of working-age adults who were either: covered all year by private employer or individual insurance; covered by Medicaid for the full year; or uninsured for some time during the year.

Findings and Conclusions: The level of access to health care that Medicaid coverage provides is comparable to that afforded by private insurance. Adults with Medicaid coverage reported better care experiences than those who had been uninsured during the year. Medicaid enrollees have fewer problems paying medical bills than either the privately insured or the uninsured.

Policy discussions about the Medicaid program, including states’ deliberations about whether to expand eligibility for the program under the Affordable Care Act (ACA) or how much money the federal government should spend on it, often center on the value of the coverage it provides. Some policymakers maintain that Medicaid coverage is inadequate relative to private insurance, with some even arguing that having Medicaid is no better than being uninsured.

In this issue brief, we analyze responses to The Commonwealth Fund’s 2016 Biennial Health Insurance Survey to compare access to care, quality of care, and medical bill problems among adults with Medicaid for the full year, private insurance for the full year, or no coverage either at the time of the survey or at some point during the past year. Private insurance coverage includes both employer-sponsored and individual coverage, including plans purchased through the ACA marketplaces. Because these three groups could potentially have different demographic profiles, we adjusted our findings for age, gender, race and ethnicity, income, and health status (Appendix Table 1).3

We asked respondents about their access to health services and their perceived quality of care. Among adults insured all year, Medicaid enrollees were as likely as those with private insurance, and significantly more likely than those who had been uninsured, to report having a regular source of care (Exhibit 1).4 Medicaid enrollees rated the quality of their care as highly as privately insured adults did and significantly higher than uninsured adults. People enrolled in Medicaid reported getting same-day appointments at a somewhat lower rate than that for people with private coverage and at a slightly higher rate than that for uninsured patients, but neither difference was statistically significant. Likewise, there were no significant differences between the three groups in reported wait times for specialist appointments (data not shown).5

Survey respondents were asked whether they had received a variety of preventive and screening services, including blood pressure and cholesterol checks, flu shots, Pap tests, mammography, and colon cancer screening (Exhibits 2 and 3). Compared to those who had been uninsured during the year, adults with uninterrupted Medicaid coverage were significantly more likely to report having received these services. There were no significant differences between adults with private coverage and Medicaid beneficiaries in rates of preventive care, with one exception: 83 percent of privately insured adults reported having had their cholesterol checked, compared with 74 percent of adults with Medicaid.

We also asked respondents whether they had problems paying medical bills or problems getting needed health care services related to cost. Respondents with Medicaid coverage were significantly less likely than either privately insured or uninsured individuals to report having difficulty paying medical bills within the past year, having to change their way of life to pay medical bills, or to be paying off medical debt over time (Exhibit 4). Those with Medicaid were also significantly less likely to report skipping needed services in the past year because of the cost of care than adults who were privately insured or uninsured (Exhibit 5). Differences between adults with Medicaid coverage and those with private insurance were statistically significant and the gaps were sometimes substantial. For example, privately insured adults reported skipping a recommended medical treatment, test, or follow-up visit because of the cost at rates more than twice as high as those for Medicaid enrollees (17% vs. 7%).

Our analysis has certain limitations. It does not shed light on whether Medicaid improves health outcomes for newly covered beneficiaries, or whether it does as good a job as private coverage in maintaining or improving health status. The analysis focuses on adults with Medicaid or private insurance who had continuous coverage during the year prior to our survey. People who lose insurance during a given year may have somewhat different experiences than those described here. Still, comparing the experiences of those with continuous coverage enables us to isolate the effects of insurance on health care quality and access.

Results from The Commonwealth Fund’s 2016 Biennial Health Insurance Survey suggest that, compared with being uninsured, having Medicaid coverage substantially improves access to services, including proven preventive care, and reduces the financial burdens of getting care. And, in comparison to adults with private coverage, Medicaid enrollees have nearly equivalent access to care based on many important measures. Medicaid coverage also appears to offer better financial protection than private insurance against the cost of treating illness, a possible reflection of steady increases in private plan deductibles and copayments in recent years. 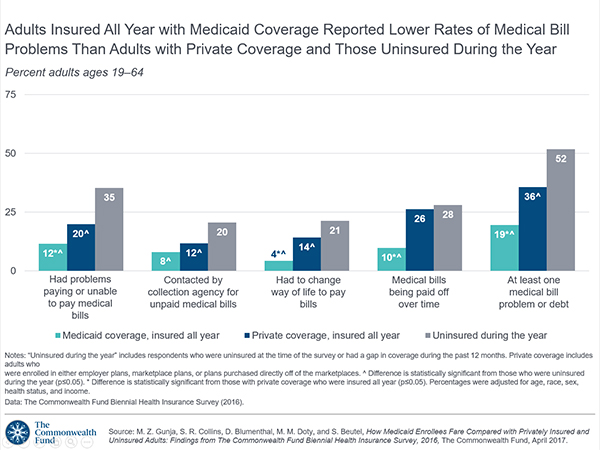 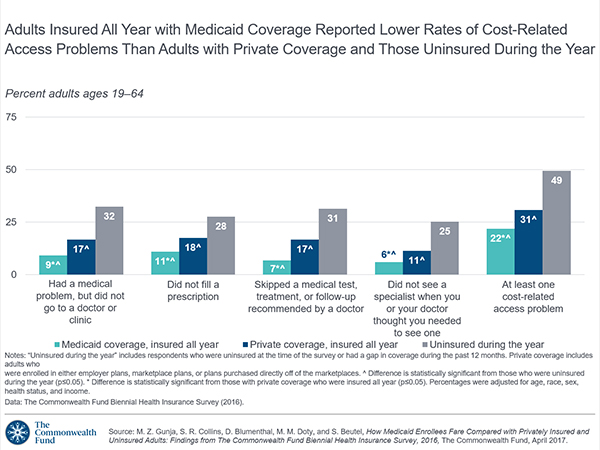 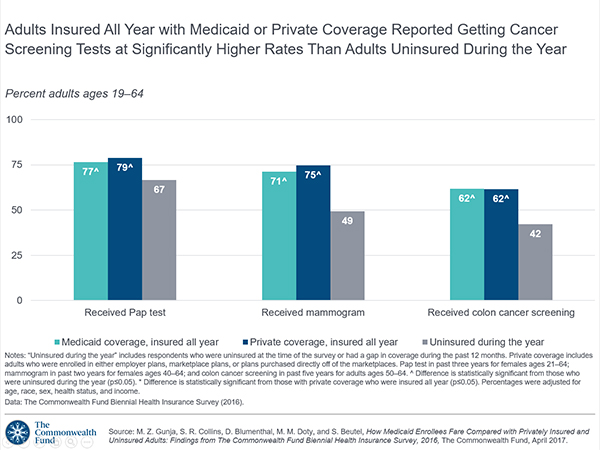 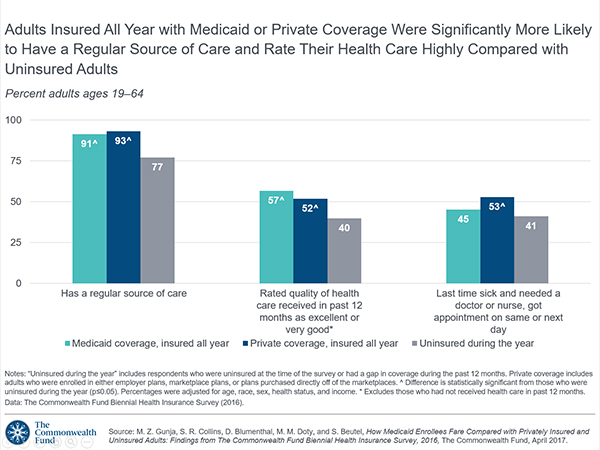 4 All reported differences are statistically significant at the p≤0.05 level or better, unless otherwise noted.

5 We define “timely” as being able to book an appointment to see a specialist within 30 days.