On October 5, 2021, we corrected errors in this brief resulting from a coding error that did not apply all cost-sharing reductions to household spending. In the “Changes in Household Spending” section and Appendix Table 3, the increase in households’ out-of-pocket spending is $0.6 billion and households’ overall savings is $8.2 billion in 2022. Previously, these estimates were $7.0 billion and $1.8 billion.

As part of the budget process for fiscal year 2022, Congress is considering a package of two reforms to the Affordable Care Act (ACA). Under the package, the enhanced premium subsidies included in the American Rescue Plan Act (ARPA) would become permanent. Additionally, the so-called Medicaid coverage gap would be filled by extending eligibility for marketplace subsidies to people earning below 100 percent of the federal poverty level (FPL) in 12 states that have not yet expanded Medicaid.

Following is a closer look at the two reforms.

Passed in the wake of economic disruption and job losses because of the COVID-19 pandemic, the ARPA temporarily enhances premium tax credits in the marketplace for 2021 and 2022. The law lowers the limits on premiums paid by families who were eligible for subsidies before ARPA and expands eligibility for subsidies to individuals and families who were previously ineligible because their incomes were greater than 400 percent of FPL (more than $106,000 for a family of four).

Although health insurance coverage through the marketplace is not as comprehensive as Medicaid coverage, expanding eligibility for marketplace subsidies to this group results in large increases in coverage.2

For this analysis, we examined the coverage and cost impact of these two key reforms together, using the Urban Institute’s Health Insurance Policy Simulation Model (see “How We Conducted This Study.”) Our analysis incorporates the effect on enrollment of increased federal spending on outreach.

The enhanced subsidies would motivate many people who were previously eligible for marketplace subsidies but uninsured to sign up for coverage. Enrollment in the subsidized nongroup marketplace would jump by 8.0 million people, nearly doubling in size to 17.3 million people across the nation.

We also estimate 670,000 fewer people would be covered by employer-sponsored insurance (ESI). Most of the people who would leave ESI are those whose employers still sponsor health insurance but whose offerings are not deemed affordable; only a very small number would likely leave ESI because their companies would stop offering health coverage. This number does not include the reduction in ESI because of an administrative change in the so-called family glitch, which is discussed later in this brief.

We project that Medicaid and Children’s Health Insurance Program (CHIP) enrollment would increase slightly by 346,000 people. Higher enrollment in the marketplace would likely trigger eligibility determinations that prompt family members to enroll in Medicaid. (Additional details on coverage changes are available in Appendix Table 2.)

An important result of the large increase in marketplace enrollment is the effect on premiums. We estimate that lower health risk scores among new enrollees would reduce premiums by about 18 percent in 2022 if insurers were able to adjust premiums immediately. The main reason average health risk would fall under these policies is that those with greater health care needs are more likely to have already obtained coverage before passage of the ARPA.

Changes in Coverage by Income 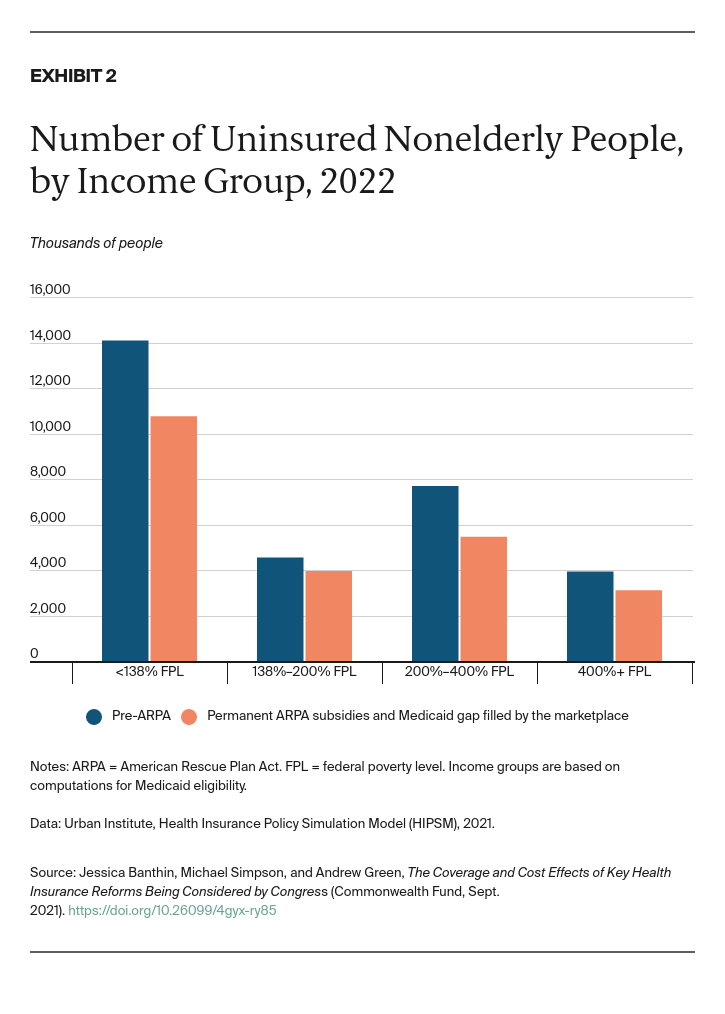 Changes in Coverage by Race and Ethnicity

Changes in Spending and Effects on Deficits

By making the ARPA premium subsidies permanent and extending eligibility for marketplace subsidies, we estimate federal spending on marketplace subsidies and Medicaid and CHIP would increase by $36.9 billion in 2022 (see Appendix Table 3). This increased spending would be offset partly by savings from reductions in the demand for uncompensated care. Although we include all of the estimated $7.5 billion reduction in uncompensated care in our calculation, only about half would be realized as savings directly through a reduction in Medicare Disproportionate Share Hospital (DSH) payments. The net effect on the deficit would amount to $27.7 billion in 2022 after accounting for higher federal revenues because of reductions in ESI coverage, which is generally exempt from income and payroll taxes.

The increased cost of marketplace subsidies and Medicaid from 2022 to 2031 would add up to $442 billion (Exhibit 4). After accounting for increased revenues because of reductions in ESI and reductions in uncompensated care, we estimate that the net effect on the federal deficit would be $333 billion over 10 years, from 2022 to 2031. The costs would likely be somewhat lower than presented here because consumers and insurers may take more time than we assumed to fully respond to the new options.

Changes in Coverage by State

If passed, this proposal would reduce the number of uninsured people in every state. We find that the largest percentage declines would occur in states that have not yet expanded Medicaid (Appendix Table 4). Declines in the proportion of uninsured people range from nearly 44 percent in Alabama to less than 6 percent in Utah.

Our estimates incorporate the effect on enrollment of administrative changes designed to increase participation, including a longer open enrollment period starting with the 2022 plan year and additional federal spending on navigators, advertising, and other types of outreach activity.

Under current law, families are generally ineligible for marketplace subsidies if a family member is offered “affordable,” worker-only coverage through an employer. The cost of covering the entire family is not considered and may be unaffordable, resulting in the so-called “family glitch.” If this policy were changed through administrative action to allow family members to become eligible for marketplace subsidies, we estimate that about 710,000 additional people would enroll in the subsidized nongroup market, most switching out of ESI. In addition, about 90,000 family members, mainly children, would newly enroll in Medicaid or CHIP as their parents seek marketplace coverage. There would be 190,000 fewer uninsured people as a result of this change. Families switching from ESI would save about $400 per person in premiums on average. These changes in coverage were estimated separately in a previous report and are not included in the numbers discussed here.4

We are not able to specifically model the provision of continuous open enrollment for people below 150 percent of FPL for this report. In our assessment, however, this provision would increase enrollment into the marketplaces by between 100,000 and 200,000 people.

We estimate that making the enhanced ARPA subsidies permanent and filling the Medicaid coverage gap by expanding marketplace eligibility to those earning below 100 percent of FPL would have significant changes on coverage. Together, these two policies would broadly expand eligibility for marketplace subsidies, reduce the number of uninsured people especially at lower income levels, and lessen household financial burdens for health care.

Our estimates use the Urban Institute’s Health Insurance Policy Simulation Model’s (HIPSM) baseline for 2022. HIPSM is a detailed microsimulation model of the health care system designed to estimate the cost and coverage effects of proposed health care policy options. HIPSM is based on two years of the American Community Survey, which provides a representative sample of families large enough for us to produce estimates for individual states and smaller regions, such as cities.5

For the pre-American Rescue Plan Act (ARPA) baseline of our analysis we chose 2022, a year when economic conditions should be more stable, following the COVID-19 pandemic and consequent recession in 2020. We assume, consistent with Congressional Budget Office projections, that the economy will have partly recovered from the pandemic recession by that time.

For this analysis, we also assume that Medicaid’s enhanced Federal Medical Assistance Percentage (FMAP) and the maintenance of effort provisions in the Families First Coronavirus Response Act will have expired before 2022. However, in a letter to governors sent in late January 2021, the acting secretary of the U.S. Department of Health and Human Services indicated the public health emergency declaration will be extended through calendar year 2021.6 This means Medicaid’s Maintenance of Eligibility (MOE) requirements, which prohibit states from disenrolling Medicaid enrollees unless they request it, are expected to last through January 2022. After that, the increased enrollment because of the MOE requirements will start to decline as states resume normal eligibility determinations.

Although recent guidance allows states up to 12 months to unwind the MOE provisions, it remains uncertain how fast this will happen. As a result, Medicaid enrollment may be higher in early 2022 than indicated in our estimates. Also, the enhanced FMAP is expected to be available through March 2022. The federal government will pay a higher share of Medicaid costs in the first quarter of 2022 than we indicate.

The baseline and estimates presented here differ from earlier national HIPSM projections of coverage and costs in that we now treat Missouri and Oklahoma as Medicaid expansion states. Both states passed ballot measures in 2020 to expand Medicaid but had not actually begun coverage when we published earlier projections.

The ARPA includes an additional financial incentive for states that have not expanded Medicaid to do so; newly expanding states receive a boost of 5 percentage points to their FMAP for two years. Because neither Oklahoma nor Missouri had begun covering Medicaid expansion beneficiaries as of March 2021 when the ARPA became law, they are eligible for the incentive payment. We estimate that the incentive would shift $808 million of state costs to the federal government in 2022. As limited duration incentive payments, these costs are not included in our baseline or in the estimates presented in this paper.

We thank John Holahan for his careful review of this report.