The percentage of Americans facing high out-of-pocket health care expenses and insurance premiums continues to increase. In all income brackets, people with private insurance experienced an increase in their health care–related financial burden between 2004 and 2006, with the greatest increase occurring among middle- and higher-income individuals.

Even before the onset of the economic recession, the financial burden of health care—the ratio of total out-of-pocket spending for health care services and premiums to total family income—was increasing for many Americans. People with private health insurance, including those with employer-sponsored coverage, were affected the most, as out-of-pocket spending rose faster than family incomes despite the modest economic growth between 2001 and 2006. This study used household survey data to examine financial burden, health insurance coverage, and income trends. A high financial burden of health care is defined as spending more than 10 percent of before-tax family income on insurance premiums and care. 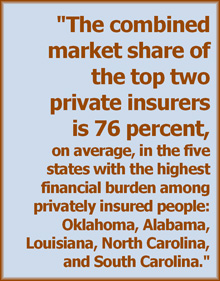 A return to robust economic growth and high employment will not alone reduce the financial stress that Americans with high health care costs experience. The newly passed health care reform law has the potential to reduce the state variation in high financial burden among the insured. Low-income states with high financial burden levels are likely to benefit the most from Medicaid expansions and from subsidies enabling low- and moderate-income families to purchase private coverage through an exchange. In addition, to the extent that insurance exchanges increase competition among health plans, the overall costs of private insurance could be lowered in some states where financial burdens are high.

The author uses data from the Medical Expenditure Panel Surveys for 2001–06. This household survey, sponsored by the Agency for Healthcare Research and Quality, collects detailed information on health care expenditures and use of services, insurance coverage, sources of payment, health status, and employment. The sample includes about 28,000 people under age 65 for each of the survey years. The author defines financial burden as the ratio of total out-of-pocket spending for health care services and premiums to total family income. High-burden individuals are defined as spending more than 10 percent of income on health care.

The financial burden of health care continues to grow nationally because of rising costs and stagnant family incomes. Middle-income and higher-income people with private insurance experienced the largest increases in financial burden between 2001 and 2006.