The recent slowdown in health care spending may be the result of the economic recession, or it may reflect public and private efforts to control spending. Whatever the cause, it remains the case that current spending is far higher than it should be. Continued efforts at cost control—including continued implementation of the Affordable Care Act’s reforms—will be necessary to bring spending more in line with the rest of the economy and to avoid rationing care.

Health care spending increased by only 0.8 percent in 2012, slightly less than the rise in gross domestic product per capita. This is a considerable slowdown: since 1969, annual health spending had increased an average of 2.3 percentage points more than GDP growth. Analysts are divided over the reasons. Some see the moderation in spending as part of slow recovery from the recession of 2007–09, and they fully expect costs to surge as the economy recovers. But others believe recent efforts to control health spending—including some features of the Affordable Care Act—may be working. In a New England Journal of Medicine article, The Commonwealth Fund’s David Blumenthal and Kristof Stremikis and Harvard University’s David Cutler weighed in on the debate. 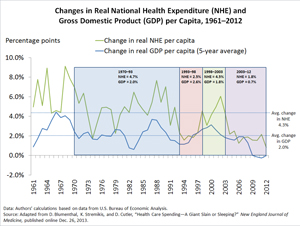 Growth in national health care spending escalated rapidly during the 1960s following enactment of Medicare and Medicaid and remained high throughout the ’70s and ’80s. Presidents Nixon, Carter, and Reagan tried different strategies to curb costs, but none had any real impact. In the ’90s, employers and insurers turned to managed care. Although this approach met with some initial success, rising costs returned, in part because of the managed care backlash and the mergers taking place in the health care industry.

During the past 50 years, the major factor in cost growth has been the development and diffusion of new medical technologies—from cardiac procedures to prescription drugs to advances in imaging. Estimates suggest about half the annual increase in U.S. health care spending has resulted from the introduction of new technologies. Rising prices for health care services have been an important factor as well, given that the U.S. does not set or negotiate prices with providers or pharmaceutical companies, as many other countries do. The aging of the population and the obesity epidemic have had modest effects, while waste throughout our health system—in the form of redundant tests, unnecessary procedures, and inefficiencies in insurance administration—has had a larger impact.

Recently, however, new, expensive blockbuster drugs are being developed at a decidedly slower pace. This trend, along with the spread of tiered formularies in prescription drug plans, has helped lower annual pharmaceutical spending from 10.1 percent in 1993–2003 to 2.3 percent in 2003–2012. The diffusion and development of medical technologies appears to be slowing, too. On the demand side, many people face very high cost-sharing, which discourages use of health services. On the supply side, providers are facing restrictions on utilization and incentives to prescribe less care. Both public and private purchasers have introduced reforms, such as penalties for preventable readmissions, which encourage more efficient care. And payment reforms, such as accountable care and bundled payments, have shown early evidence of savings.

If cost increases return to their historical pattern, the United States is projected to spend
$5 trillion on health services in 2022, placing a tremendous burden on the government and forcing higher taxes or cutbacks in spending on other high-priority areas, like education. In the private sector, these increases would cut into wage gains for all employees. Rationing services, by reducing benefits and increasing cost-sharing, is one option for containing costs. But the authors point to another: “Almost without exception, recent studies of health care costs have recommended discarding the current fee-for-service payment system in favor of having providers share risk for the cost and quality of services,” they write. Such arrangements could include capitation or partial capitation, global budgeting, or accountable care organizations. All these approaches financially reward providers for avoiding unnecessary care and delivering higher-value services. Readily available health information, care coordination, accessible primary care services, and engaged consumers are also part of the solution.

Regardless of whether health care spending continues to slow or returns to the pre-recession rate of escalation, we have an opportunity to create constructive, systemic reform that avoids the pain of health care rationing.