As part of their accountable care organization (ACO) contracts with physician practices, payers offer providers incentives to keep down costs and improve the quality of care that patients receive. A Harvard study found that these incentives can have positive spillover effects for patients not specifically targeted by the incentives—in this case, significantly lower spending on outpatient care. The findings suggest that providers’ responses to the ACO initiative led to broad changes in patient care. 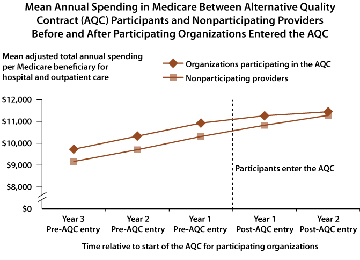 A growing number of provider organizations are taking on financial risk for the cost and quality of care they provide to designated patient groups under ACO contracts with public or private payers. But since most provider organizations contract with multiple payers, the incentives to lower spending and improve quality under an ACO contract apply only to a subset of patients in any given organization. Commonwealth Fund–supported researchers sought to examine whether payment incentives implemented under a commercial ACO had spillover effects on the costs and quality of care for patients not covered by the contract. The Harvard researchers focused on Blue Cross Blue Shield of Massachusetts’ Alternative Quality Contract, an ACO initiative implemented in 2009 that has been associated with reduced spending and improved quality for commercial plan enrollees.

The study suggests that the ACO payment model has the potential to foster systematic changes in care delivery. Evaluations of ACO programs should consider spillover effects to other patient populations to assess ACOs’ full clinical and economic benefits.

The Alternative Quality Contract, which has led to reduced spending and improved quality among targeted commercially insured patients, is also associated with significant reductions in spending for Medicare beneficiaries treated at participating practices, though improvements in quality of care are not consistent. The study’s findings suggest that the new payment incentives can lead to broad changes at participating organizations, bringing benefits to patients not specifically targeted by the contract.