Nursing homes that used telemedicine to provide after-hours care significantly reduced hospitalization rates for their residents, compared with facilities not using this service. Savings from the reduction in hospitalizations, however, generally accrued to Medicare, rather than to nursing homes. Different payment models, such as those used in accountable care organizations or managed care, are needed to encourage telemedicine use among nursing home facilities. 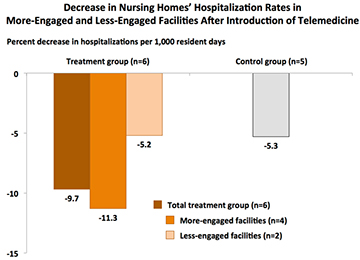 Nursing home residents in need of medical care after regular hours or on weekends are often sent to the hospital, where they have a greater chance of experiencing health complications or even death. These hospitalizations cost Medicare more than a billion dollars a year. Evidence shows that a lack of physicians on call during off hours can result in inappropriate hospitalizations of residents. Commonwealth Fund–supported researchers assessed the potential of telemedicine, which enables patients to visit with physicians “virtually” by way of two-way video or other telecommunications technologies, to lower rates of hospitalization and achieve savings. Their study compared nursing facilities that used telemedicine for after-hours care to homes that did not.

While after-hours telemedicine coverage can generate savings for Medicare, nursing homes must use the service to its full potential for these savings to be realized, the study’s authors say. To do this, telemedicine providers and nursing home leaders will need to encourage the buy-in of administrators, frontline staff, and physicians. Changes in hospital payment will also likely be necessary. Currently, nursing homes have financial disincentives to invest in telemedicine, since any savings typically accrue to Medicare, not to the facilities themselves. In addition, once long-stay Medicaid residents return to the nursing home from the hospital, the nursing home often receives the higher Medicare skilled-nursing facility benefit. The spread of accountable care models and other models that put providers at risk for the total costs of caring for designated patient populations may help create a business case for investment in telemedicine, the authors note.

The authors tracked how the introduction of after-hours telemedicine services among nursing homes in a Massachusetts for-profit chain affected hospitalization rates and spending from October 2009 to September 2011. Six of the 11 facilities were randomly assigned to the intervention group, while the other five served as the control, or comparison, group. Calls to the service were answered by a medical secretary, who triaged patients to a registered nurse, nurse practitioner, or physician, all of whom were on staff. Based on the frequency and type of telemedicine calls made by the intervention nursing homes, the authors categorized these facilities as “more engaged” or “less engaged."

Telemedicine may be a cost-effective way to help keep nursing home residents out of the hospital and reduce costs. But additional steps are likely needed to create a business case for nursing homes and other providers to invest in this service.

D. C. Grabowski and A. J. O’Malley, "Use of Telemedicine Can Reduce Hospitalizations of Nursing Home Residents and Generate Savings for Medicare," Health Affairs, Feb. 2014 33(2):244–50.