In the first two years of the Alternative Quality Contract, an incentive-based provider payment program implemented by Blue Cross Blue Shield of Massachusetts, there was a significant, albeit modest, improvement in the quality of children’s preventive care, but no change in health care spending. More targeted efforts, particularly ones aimed at children with special health care needs, might lead to greater improvement and savings. 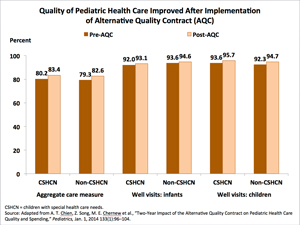 A growing number of health care purchasers are looking to combine incentives for providers to reduce spending (e.g., through global budgets or shared risk) with incentives to improve quality (e.g., through pay-for-performance bonuses). Blue Cross Blue Shield of Massachusetts’ Alternative Quality Contract (AQC), established in 2009, is an early example of such a payment approach. Commonwealth Fund–supported researchers examined how the AQC has affected the quality of care for children, including those with special health care needs, as well as spending levels.

At baseline, performance on measures of acute care among AQC providers was already high, which perhaps explains why only modest improvement was seen, according to the researchers. In order to reap greater improvements and potentially accrue savings, they say, global budget arrangements may need to target pediatric care processes and outcomes related to children with special health care needs—a growing population that has higher-than-average health care cost.
The AQC was not associated with changes in care quality not linked to the incentives. At the same time, the contract did not motivate providers to overemphasize those health care services tied to incentives at the expense of other services—an original concern.

The authors compared health care quality and spending before (2006–08) and after (2009–10) Blue Cross Blue Shield of Massachusetts implemented the Alternative Quality contract among pediatric providers. The study population included 126,975 pediatric patients (ages 0–21) receiving care from physician groups operating under the AQC and 415,331 pediatric patients receiving care from non-AQC groups. Across both patient groups, 23 percent of children had special health care needs. The metrics used were: a composite of six preventive and acute-care measures tied to performance bonuses; five measures assessing care related to children with special needs that were not tied to incentives; and average total annual medical spending.