A Comparison of Hospital Administrative Costs in Eight Nations: U.S. Costs Exceed All Others by Far

Administrative costs account for 25 percent of total U.S. hospital spending, according to a new study that compares these costs across eight nations. The United States had the highest administrative costs; Scotland and Canada had the lowest. Reducing U.S. per capita spending for hospital administration to Scottish or Canadian levels would have saved more than $150 billion in 2011.

Even as all nations struggle with rising health care costs, the United States remains an outlier. Several factors help explain higher costs in the U.S., among them, higher physician fees, a focus on specialist services at the expense of primary care, and greater use of advanced technology in medicine. Some studies also have noted the substantial administrative costs incurred by U.S. health insurers and providers, including costs associated with coding, billing, and similar activities. In this Commonwealth Fund–supported study, researchers sought to compare hospital administrative costs in the U.S. with those in Canada, England, Scotland, Wales, France, Germany, and the Netherlands, using data obtained for 2010 or 2011. 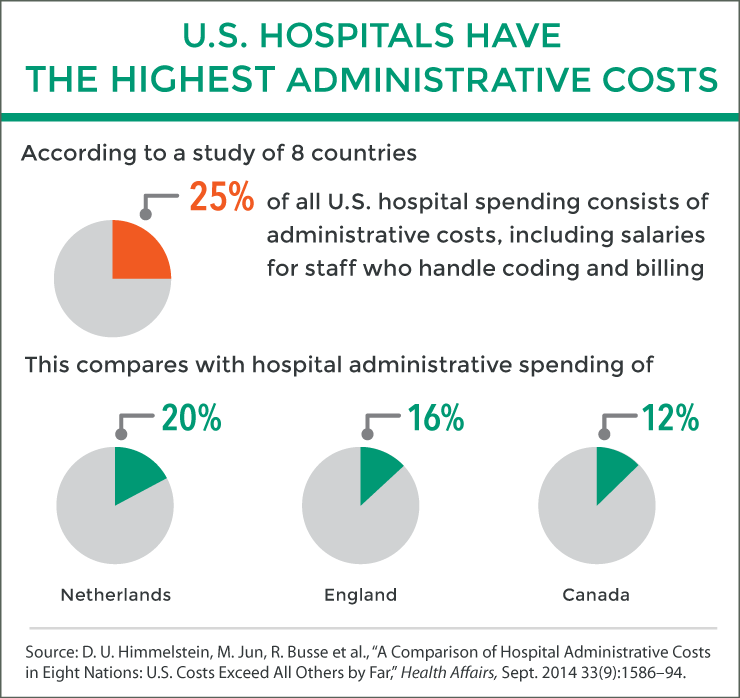 Hospital administration costs ranged from 1.43 percent of gross domestic product (GDP) in the United States ($667 per capita) to 0.41 percent of GDP ($158 per capita) in Canada.

In countries where hospitals receive global, lump-sum budgets, garnering operating funds requires little administrative work. Per-patient billing, on the other hand, requires additional clerical and management staff and special information technology systems. In countries where there are multiple payers, as in the United States, billing is even more complex, since each hospital must negotiate payment rates separately with each payer and conform with a variety of requirements and billing procedures. Also factoring into administrative costs is how hospitals obtain their capital funds. The combination of direct government capital grants and separate global operating budgets—the approach taken in Canada and Scotland—was associated with the lowest administrative costs.

The research team obtained official accounting data for 2010 or 2011 that covered most or all hospitals in each of the eight nations. A detailed study methodology can be found in the article.