Reducing Medicaid Churning: Extending Eligibility for Twelve Months or to End of Calendar Year Are Most Effective

Low-income adults often cycle in and out of the Medicaid program when their income or life circumstances change. As a result, they face disruptions in care that put them at risk for poor health outcomes. Two policy options—extending coverage until the end of a calendar year or for 12 months following enrollment—are effective in reducing this “churning.”

Because eligibility for Medicaid is determined by current monthly income, many beneficiaries temporarily lose coverage when their seasonal employment or overtime pay increases—and later requalify when their income dips. This churning in enrollment places administrative burdens on states and Medicaid managed care plans. The authors of this Commonwealth Fund–supported study looked at four policy options for addressing the problem and simulated their impact on churning and enrollment. The options include: 1) extending coverage to the end of the calendar year; 2) granting coverage for 12 continuous months, regardless of changes in income or life circumstances; 3) basing eligibility on an estimate of annual income; and 4) extending coverage by three months when a change in income or life circumstances causes a loss of eligibility.

"States should consider implementation of the option that best balances costs while improving access to coverage and, thereby, the health of Medicaid enrollees."

States seeking to reduce churning in Medicaid enrollment will face trade-offs between ensuring continuity of care and controlling health care expenditure growth resulting from improved access. Some of the expected spending increases may be offset by reductions in administrative costs related to churning—estimated at $400 to $600 per enrollee—and by reducing expenditures on hospital care that could be avoided with better ongoing care. How states view this cost trade-off may depend on their financial solvency, their willingness to extend eligibility to low-income residents, and the amount of churning they currently experience.

The authors relied on data from the U.S. Census Bureau’s Survey of Income and Program Participation to predict how changes in monthly income would influence eligibility, assuming all states opted to expand Medicaid eligibility to those whose income was at or below 138 percent of the federal poverty level. The findings described here were based on the assumption that 85 percent of those eligible would opt into the program and that 15 percent would experience a disruption. The authors also simulated the effect of different opt-in and disruption rates.

Extending Medicaid coverage to the end of the calendar year would maximize the number of people covered by the program and produce the least disruption to beneficiaries. 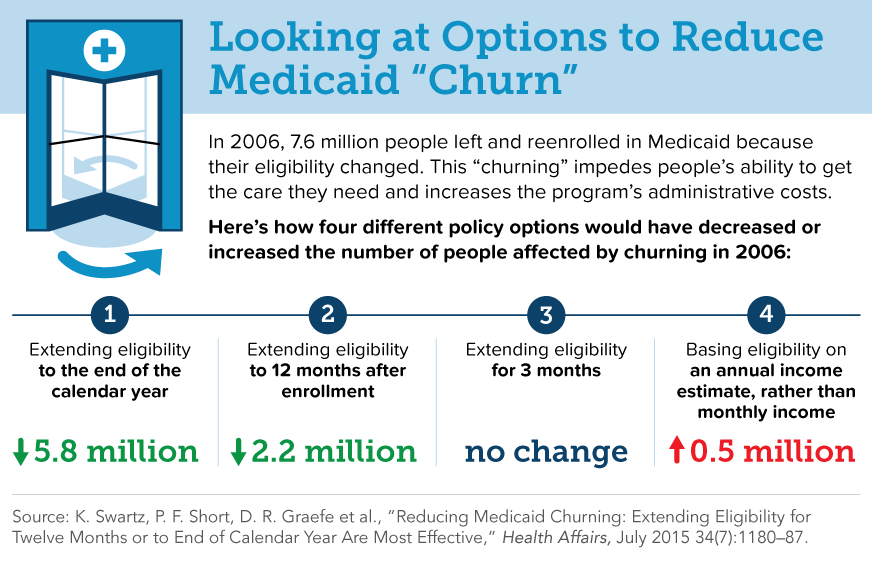