The Affordable Care Act (ACA) gives states the option to expand Medicaid eligibility to all adults with incomes under 138 percent of the federal poverty level (about $16,000 for an individual or $33,000 for a family of four). So far, 30 states and the District of Columbia have chosen to do so. Most have taken a traditional approach to expanding Medicaid, but several have elected the “private option”—using Medicaid funds to purchase private insurance through the federal and state marketplaces. This Commonwealth Fund–supported article in Health Affairs examines the experiences of low-income adults during the first year of the ACA Medicaid expansion in three states that adopted different strategies: Kentucky, which expanded traditional Medicaid coverage; Arkansas, which used the private option; and Texas, which did not expand Medicaid.

Findings suggest that deciding whether or not to expand [Medicaid] matters much more than deciding how to expand. 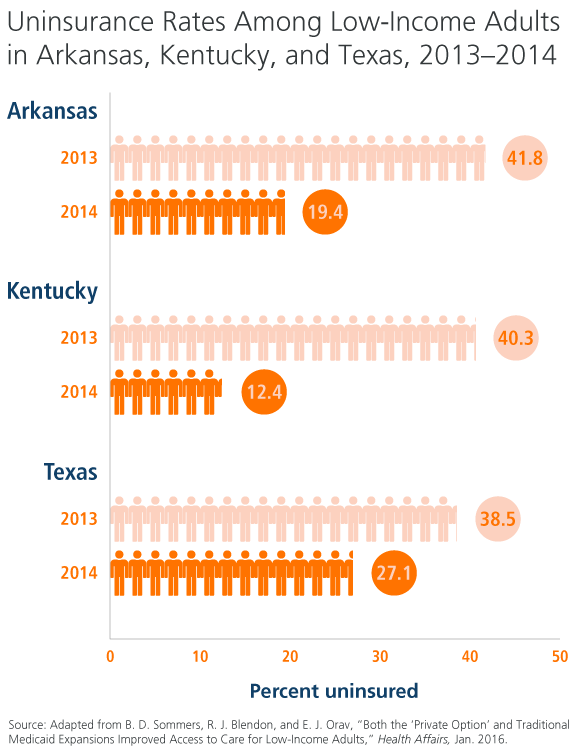 While there has been debate regarding the merits of the two Medicaid expansion approaches, this study found no significant differences (other than trouble paying medical bills) between Kentucky’s traditional approach and Arkansas’s private option. “[O]ur findings suggest that deciding whether or not to expand matters much more than deciding how to expand,” the authors write. Both models appear to be promising strategies to improving access to care among low-income adults. The authors note that additional research will be critical for evaluating the ACA’s long-term impact on this population.

Both traditional Medicaid expansion and the private option, which uses federal funds to purchase private plans, improve the likelihood that low-income adults will be able to get insurance coverage, afford needed health care, and obtain regular care for chronic conditions.