Where the Money Goes: The Evolving Expenses of the U.S. Health Care System

U.S. expenditures on hospitals, physicians’ offices, and outpatient care centers rose from $0.8 trillion in 1997 to $1.4 trillion in 2012. Half of these expenditures went toward labor costs, including physicians’ and nurses’ salaries. But the most rapidly growing category of expense was goods and services—pharmaceuticals (purchased by providers), medical devices, and other items, as well as services like accounting and engineering. By 2012, payments for such goods and services accounted for one-third of spending.

Finding ways to control health care spending is a major concern for U.S. policymakers and a goal of many health care delivery reform efforts. And while spending levels are closely tracked, little is known about how the money spent is allocated across the system and how this has changed over time. To inform the development of strategies for cost control, a Commonwealth Fund–supported study compared expenditures and revenues in three health care sectors—hospitals, physicians’ offices, and outpatient care centers in 1997, 2002, 2007, and 2012. 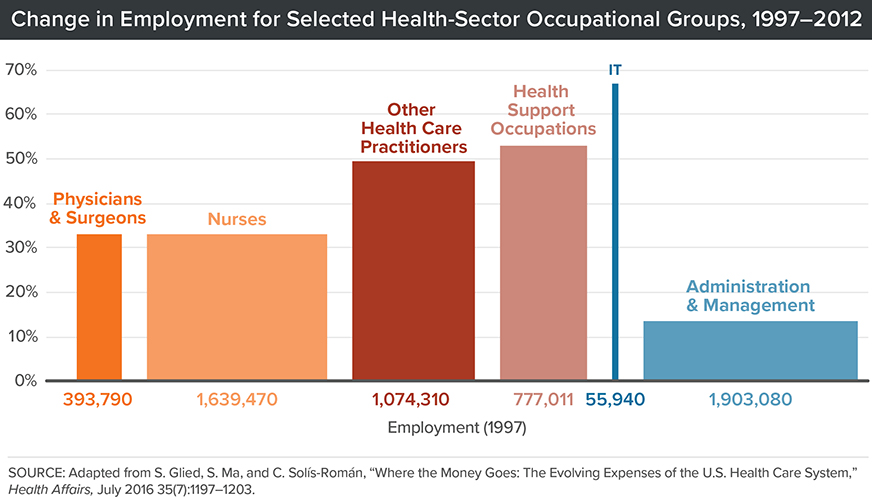 The findings suggest that regulatory and market changes, economywide trends, and the expanding role of technology have all influenced health care spending. Over the study period, health care providers experienced declining payments from public insurers and from some private payers. But providers appear to have been able to adjust their expenses in response to reduced revenue. While labor costs continue to be high, overall labor compensation declined slightly. The prominent role of technology in health care is apparent in the increased share of expenses going toward goods and services.

"Changes in the health care sector—including the development of new delivery systems and the introduction of new technologies—are likely to alter where the money in the sector goes and who receives how much of it in the future."

The researchers used data from the Bureau of Labor Statistics and the Economic Census, conducted in 1997, 2002, 2007, and 2012, and from the Economic Census’s annual industry accounts. They examined intermediate costs (the monetary value of goods and services), labor costs (wages, benefits, and contract labor), capital expenses (including structures and equipment), and tax expenses (including taxes and license fees). Results are reported in constant 2012 dollars.

Ongoing changes to health care delivery and the growing adoption of new technologies are likely to change where health care dollars are spent. Monitoring the different components of health care spending can help inform policymaking.