As states confront their most challenging budgets in decades alongside new responsibilities to implement national health reform, many are looking at opportunities to improve long-term care as a way to control costs and serve seniors and people with disabilities in the settings they prefer. This issue of States in Action describes provisions in the Affordable Care Act that assist states in expanding home- and community-based long-term care services, the growing grassroots movement to improve facility-based care, and innovative programs in Colorado, Michigan, and Rhode Island that seek to provide consumer-directed long-term care.

One of five Americans—56 million people—report having a disability that limits routine activities of daily living. Among this population, about 10.3 million people require long-term care, which includes a variety of medical and social services to help meet health or personal needs. Most long-term care is to assist people with basic tasks, such as eating or bathing, or activities necessary for independence, such as preparing meals or managing money. And most people who need long-term care services and supports (85%) receive them at home or in community-based settings, such as a daytime activity center. However, a significant number of people who require long-term care—1.5 million—reside in nursing homes or other facilities that attend to their long-term care needs (Figure 1). 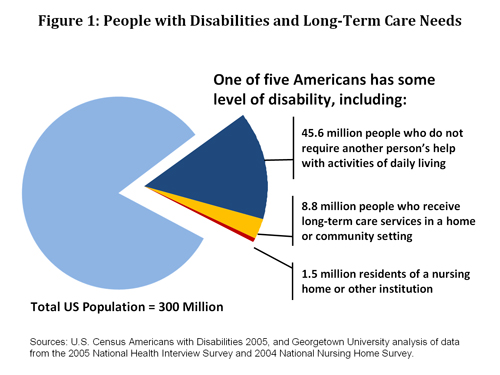 Most long-term care is provided as unpaid help from family and friends: four of five people who receive long-term care in the community rely exclusively on unpaid assistance (National Clearinghouse for LTC). When unpaid assistance is not enough or not available, then people with disabilities rely on paid individuals or companies to provide services. These services are expensive and can quickly exhaust lifetime savings. When that happens, the Medicaid and Medicare programs provide assistance. 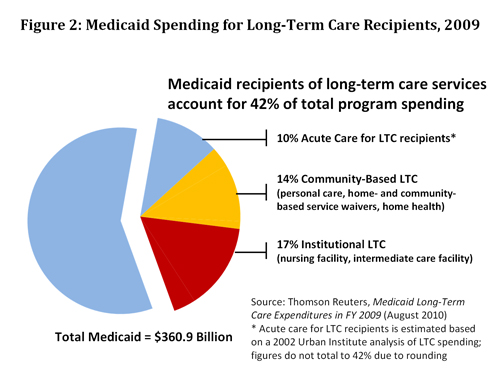 Over the past three decades, states have been expanding Medicaid home- and community-based services (HCBS) in response to consumer preferences for alternatives to facility-based long-term care and, since 1999, in response to court-ordered mandates to serve people with disabilities in the least restrictive setting, taking into account the resources of the state. State Medicaid spending on HCBS programs has increased dramatically over the past 10 years, from 27 percent of total long-term care spending in 1999 to 44 percent in 2009 (Thomson Reuters). The shift toward HCBS also represents a budget strategy in most states to decrease Medicaid spending on higher-cost, facility-based services.

National health reform creates a number of opportunities for states to further expand access to HCBS programs. "I know, as a former governor," said Health and Human Services Secretary Kathleen Sebelius in a July 26 letter to governors, "that the federal government and states need to work side by side to deliver on the Affordable Care Act's promise of access to health care regardless of disability" and "provide greater opportunities for Americans with disabilities to live and work in their communities." The ACA creates new HCBS benefit options, higher income eligibility standards for these services, and federal financial incentives for states to further shift or "rebalance" long-term care budgets toward community-based settings. Major HCBS initiatives in the new law include:

Changing the Culture of Residential Care

"States need to be careful not to focus too narrowly on just HCBS options," says Bonnie Kantor, executive director of the Pioneer Network. "Instead of focusing on the setting of care," she says, "the real goal is to create a culture of patient-centered care that creates a sense of home and community in every setting, including facility-based care."

Consumers, patient advocates, providers, and policymakers are calling for "culture change" to improve long-term care. (See Ask the Expert  for further description of the culture change movement.) The Pioneer Network, which focuses on culture change for seniors, was an early advocate of moving from provider-directed care toward consumer-directed care that preserves the dignity of individuals and enables them to make decisions about their daily routines (Figure 3). The provisions of the national health reform law described above promote culture change by seeking to integrate care around the person, increase workforce capacity, and improve the quality of care. 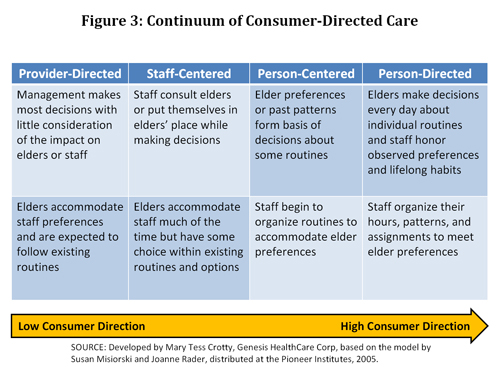 Culture change has begun to receive significant attention at the national and state levels. Philanthropic foundations, including The Commonwealth Fund, are funding programs to help foster culture change in nursing homes and other long-term care settings. At the federal level, the Centers for Medicare and Medicaid Services (CMS) has contracted with quality improvement organizations to train providers to engage in culture change efforts and sponsored several national meetings to bring the major stakeholders together. The Institute for Aging Services reports on these activities here.

Given that states are major players in financing and regulating long-term care, they have an important role to play in ensuring the quality of care and quality of life that people receive in nursing homes and other long-term care settings. Opportunities for states to improve long-term care services and support systems are described in the Ask the Expert column and Snapshots in this issue.