National health reform efforts are seeking to expand insurance coverage, improve quality of care, and "bend the health care cost curve." At the center of the debate is whether a new public health insurance option should be offered to the under-65 population, and how this public plan should be structured. A recent Commonwealth Fund report analyzed alternative public plan options and presented estimates of the impacts on health spending compared with projected trends.

While there is significant agreement among congressional leaders that the nation must expand health insurance coverage, improve the quality of health care, and contain costs, there is no consensus about the role the federal government should play in achieving these goals—particularly with regard to a possible new public health insurance plan. At the same time, the Obama administration and congressional leaders have pledged to find ways to pay for health reform without adding to the federal deficit. In the report, Fork in the Road: Alternative Paths to a High Performance U.S. Health System, Commonwealth Fund researchers presented three alternative approaches to health reform—two that include a public plan option and one that relies on private plans only—and provided estimates of the potential impact each would have on health care spending.

Impact on Coverage and Costs 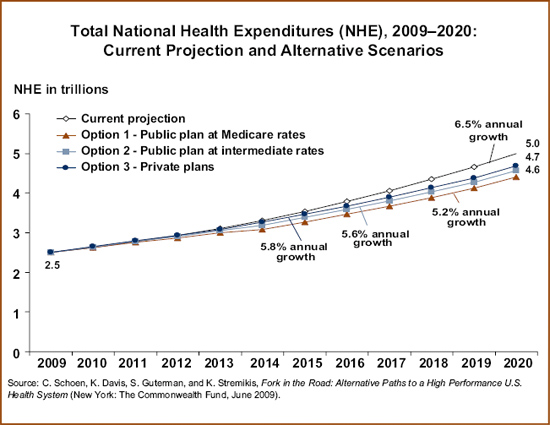 Expanded coverage. Under all scenarios, the insurance expansion would bring about near-universal coverage, with the number of uninsured dropping from 48 million in 2009 to 4 million by 2012, a level maintained through 2020.

Impact on federal budget and employer costs. Over the 2010–2020 period, the cumulative net increase in federal budget outlays is estimated to be $112 billion under the Public Plan with Medicare Payment Rates option, $232 billion under Public Plan with Intermediate Payment Rates, and $360 billion under Private Plans. In all three scenarios, employers would be required to cover their workers or contribute a percentage of workers’ earnings to a health insurance fund. Those firms that do not provide health benefits would bear added costs, while those that do would benefit from lower premiums and slower growth in health care costs. Over 2010–2020, payment and system savings under the Public Plan with Medicare Payment Rates scenario would offset any added costs for employers, resulting in net cumulative employer savings of $78 billion. 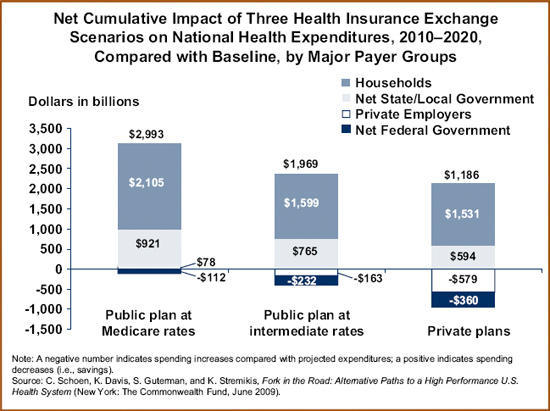 Savings for families. Households in all income groups would benefit over time under all three approaches, since slower growth in premiums and out-of-pocket costs, the availability of premium assistance, and expanded public programs would make insurance affordable. By 2020, average household savings would range from $1,600 per year in the Private Plans and Public Plan with Intermediate Payment Rates options to more than $2,200 in the Public Plan with Medicare Payment Rates option.

The availability of a public plan, along with its particular payment policies, accounts for the differences in health system savings and federal budget costs among the alternative scenarios. The differing results reflect the public plan’s administrative cost savings as well as the more rapid spread of payment reforms that would be possible with the creation of a new dynamic for transforming both health insurance and the provision of health care. Combined with payment and system reforms, each scenario would represent a major step toward covering the uninsured and controlling cost growth.