As part of the health reform debate, Senator Kent Conrad (D-ND) has proposed forming nonprofit cooperatives to provide health insurance coverage at low cost. While the details are still being fleshed out, an examination of the history of cooperative health care—which has often also featured an integrated care delivery system—reveals some important lessons that apply to the current policy discussion. The three major takeaways are:

History of Health Cooperatives
According to sociologist and writer Paul Starr, the first health care cooperative was formed in 1929 by Dr. Michael Shadid in Elk City, Oklahoma—my home state. This pioneer faced immense obstacles, including opposition from the county medical society. Nonetheless, with the help of the populist Oklahoma Farmers’ Union, he succeeded in securing a loan to build a hospital and creating a prepaid insurance plan. Dr. Shadid’s philosophy was that the government’s role was to subsidize the poor’s enrollment fees. Consumers would manage the business operations, but doctors would remain in control of the professional aspects of care.

Dr. Shadid’s success inspired others to form regional health cooperatives that provide networks of health care plans and providers. Indeed, the two most successful modern examples of cooperative health systems are HealthPartners, based in the Twin Cities of Minnesota, and the Seattle-based Group Health Cooperative. Both of these consumer-governed health care organizations serve more than 500,000 members in a wide geographic region. Along with insurance, they directly provide health care services through a nonprofit integrated delivery system that owns its own hospitals and has its own dedicated multispecialty physician group providing integrated, coordinated care of high quality while making prudent use of resources. Although both organizations have encountered obstacles throughout their 50-plus-year histories—among them, the opposition of organized medicine and internal tensions between physicians and consumer-governed boards—they exist today as examples of health care organizations that deliver high-value care. New case studies of the two organizations, now available on the Commonwealth Fund Web site, offer insight into their strategies.

There is no question that these shining examples of cooperative health represent a model for the financing and delivery of health care, as do similar nonprofit—though not consumer-governed—integrated delivery systems, such as Geisinger Health System, Intermountain Healthcare, and Kaiser Permanente. The question is: What would it take to go from our current system of health care to a national delivery system that has the mission, values, capacity, and operational systems and strategies of these organizations?
The cooperative landscape is certainly littered with failures. Group Health Association in Washington, D.C., for example, failed in the early 1990s after intense conflicts between consumer-led management and the medical group. Another large cooperative, Group Health Inc. (GHI), in New York City, is preparing to convert to for-profit status. Surrounded by a marketplace that provides substantial rewards to for-profit insurance and fee-for-service care, these organizations have moved away from the original consumer-led governance structure and mission.

This cooperative health care experience—both successful and unsuccessful—underscores the difficulty of reconciling the public’s desire for low-cost, high-quality care with physicians’ desire for professional autonomy and control of health resources. It is also difficult to maintain the ideals of consumer-governed health care in the face of a marketplace that rewards volume over value. There are even legal obstacles, erected by those favoring the current marketplace incentives. In response to the development of cooperatives owned by their members/patients, a number of states enacted laws that make it illegal for a physician to be employed by a nonphysician, effectively precluding cooperative health plans.

The key to the success of cooperatives in other sectors of the economy has been the ability to leverage purchasing power to obtain lower rates—for electricity, as an example. Rural electricity cooperatives took root during the Great Depression following establishment of the Tennessee Valley Authority (TVA) Act in May 1933. This act authorized the TVA board to construct transmission lines to serve “farms and small villages that are not otherwise supplied with electricity at reasonable rates.” The idea of providing federal assistance to accomplish rural electrification gained ground rapidly when President Roosevelt took office in 1933 and launched his New Deal programs. On May 11, 1935, Roosevelt signed Executive Order No. 7037, establishing the Rural Electrification Administration (REA). A year later the Rural Electrification Act was passed, and the lending program that became the REA got under way.

Most rural electrification is the product of locally owned rural electric cooperatives that got their start by borrowing funds from REA to build lines and provide service on a nonprofit basis. Today the REA is the Rural Utilities Service and is part of the U.S. Department of Agriculture. An important part of the history of electric cooperatives has been the development of power marketing agencies (PMAs). In 1937, the federal government established the first PMA, the Bonneville Power Administration. The government proceeded to form four more PMAs to market the power generated at 133 federal dams across the country. The federal law that governs PMAs gives preference in the sale of power at cost to public bodies and electric cooperatives. The availability of low-cost power to electric cooperatives has promoted economic development and has offset the cost of serving sparsely populated areas.

For cooperative health care to slow the growth in health care costs and achieve savings, a cooperative insurance organization would need the authority to purchase care on favorable terms. This might be accomplished by guaranteeing that the cooperative health plan can obtain the lowest price charged to the most favored customer. Today, commercial insurers dominate the market in most geographic areas, and, with the exception of three states, the two largest health insurance plans in each state account for 50 percent or more of all private insurance enrollment.

These plans use their purchasing clout to obtain discounted rates in negotiations with local health care providers. In local markets where there are dominant health care providers, hospitals and other providers are able to push back and demand higher rates. But while multiple negotiations among multiple insurers and multiple providers consume significant administrative costs, the result is not a competitive market price applicable to all customers, but rather favorable rates for the most powerful participants in the negotiations.

Another way to leverage purchasing would be to have a national cooperative organization negotiate provider prices on behalf of all customers. This is the model used by Germany’s "sickness funds." These membership cooperatives, which have consumer boards, conduct negotiations with their regional counterpart provider organizations on behalf of all patients for standard health benefits. In the U.S., such a process could be entrusted to a national “Health Value Authority” and applied to all health plans participating in an insurance exchange. A nonprofit, consumer-driven entity acting in the public interest would then manage payment and delivery system reform, rather than leave such reforms to the market powers of insurers or providers in a given geographic area or to a political process influenced by special interests.

This strategy would break new ground and lead to a health system that provides high-quality, high-value care. The role of insurance would be to pool risk broadly and restructure local competitive markets so as to align incentives with the provision of high-value care. The long history of establishing local cooperative health care delivery systems certainly raises awareness about how quickly such change could be effected. And the responsibilities, authority, and structure of a national Health Value Authority would require careful thought, time, and expertise to develop and implement.

The second option is to create a new public health insurance plan, offered by the U.S. Department of Health and Human Services (HHS), that adopts new value-based payment methods, builds on the current Medicare network of hospitals and physicians, and competes with private insurers within a national health insurance exchange. Even subject to the same rules as private insurers regarding benefits, coverage, and other standards, such a plan could offer a premium that is 15 to 25 percent lower than premiums now offered in the individual and small business market, depending upon whether providers are paid at Medicare levels or at some midpoint between commercial and Medicare levels.

HHS could also be given the authority to modify rates for individual services. This might involve reducing rates for overpriced services, which have contributed to the enormous growth in volume of services documented by the Dartmouth Atlas and, more recently, by Atul Gawande in his influential New Yorker article. Savings from reducing prices for overpriced services could be shared between the federal budget and a bonus pool for high-performing providers.

Payment rates under the public health insurance plan could also be made available to private plans, with the same carrots and sticks for physicians to participate in the network. Competition between a public plan and private plans featuring a level playing field for provider payment could achieve significant economies both initially and over time, yielding up to $3 trillion in health system savings between 2010 and 2020.

Under such reform, most providers would continue to experience rising revenues, albeit at a slower rate. Covering the uninsured generates new revenues for providers and improved benefits reduce bad debts. If a public plan paid providers at a point midway between Medicare and commercial rates, physician revenue would grow on average at an annual rate of 4.3 percent over the 2010–2020 period and hospital revenue would grow at an annual rate of 5.3 percent—well within the growth rate promised by an industry coalition in a letter to President Obama.

A People-Centered, Value-Enhancing Health System
As President Lincoln emphasized in his Gettysburg Address, the U.S. is guided by the philosophy of “government of the people, by the people, and for the people.” What is needed in health care is a similar philosophy: a health system that is truly for the people. Redesigning health care so that it puts people front and center and ensures that care is patient-centered, accessible, and coordinated should be the fundamental goals of health reform.

Ultimately, it is the public that pays for health care, whether through the direct costs of premiums and health services, forgone wages from rising premiums in employer-sponsored health plans, or higher taxes to support Medicare, Medicaid, and other public health programs. Health reform needs to ensure accountability and value for the resources that are entrusted to health care organizations and providers for the care of patients.

Two choices have been put on the table—a cooperative health care system designed and governed by consumers, and a public health insurance plan designed and offered by government acting in the public interest. Both could work if they are given sufficient authority to act in the public interest. Adopting a new cooperative health system would be difficult, and its long-term impact and sustainability would be uncertain. Still, both alternatives embrace a philosophy of people-centered health care and both are worthy of debate and consideration. Incorporating elements of both into health reform may well point the way forward. 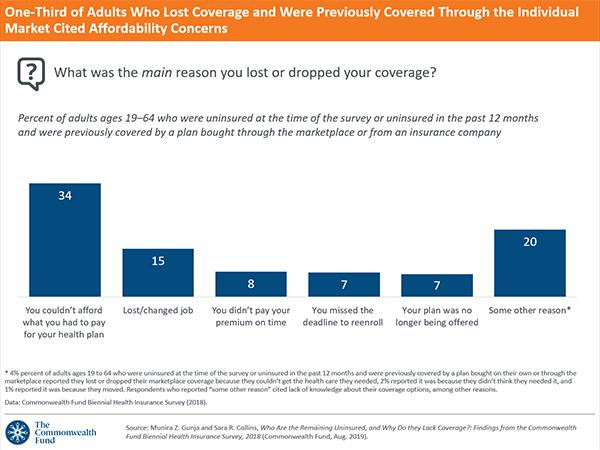 One-Third of Adults Who Lost Coverage and Were Previously Covered Through the Individual Market Cited Affordability Concerns
August 28, 2019 | Chart