What Is Affordable Health Care?

Ensuring that all Americans have access to affordable health insurance and care is one of the major goals of federal health reform, if not the major goal. Under the three bills now before Congress, affordability is achieved through expansion of the Medicaid program, creation of an essential insurance benefit package, and sliding-scale subsidies to make premiums and cost-sharing affordable for low- to moderate-income families. However, the bills recognize that budgetary limitations may still leave some families subject to financial hardship and exempt families from the requirement to purchase insurance if such coverage proves unaffordable.

Determining what is and is not "affordable" for different groups is a challenge that is reflected in the varying levels of coverage and assistance offered across the three bills. In making these calculations, it is important to recognize that affordability is related both to premiums and out-of-pocket costs. If a family’s premium is low but their out-of-pocket expenses are high, their care may ultimately be difficult for them to afford.

Medicaid Expansion. Expanding the safety-net insurance system through Medicaid is critical to reaching a large portion of the nation's uninsured, low-income working individuals and families. The three congressional bills–the House bill, the Senate Health Education, Labor, and Pensions (HELP) bill, and the Senate Finance bill–all provide for this essential floor of coverage. The House and Senate Finance bills expand Medicaid up to 133 percent of the federal poverty level (approximately $30,000 for a family of four in 2009), and the HELP bill expands coverage up to 150 percent of poverty. These expansions include previously ineligible populations, such as childless adults. According to estimates from the Congressional Budget Office, as a result of these expansions, the number of people under age 65 covered by Medicaid in 2015 would increase from 34 million to 43 million under the House bill and 44 million under the Senate Finance bill. Those covered by Medicaid would not face premiums or significant cost-sharing for medical bills.

Insurance Exchange and Insurance Regulation. Each bill would create a new health insurance exchange, or a marketplace managed and regulated by the government, through which eligible individuals and small businesses could choose among private plans or, in the case of the House bill and Senate HELP bill, a public health insurance plan. Requiring individual and small business health plans to cover everyone and charge the same premium regardless of health status increases affordability for those with serious health problems–a major concern in the current system. All plans would have to meet requirements of participation set by the exchange. Participants in the exchange with incomes up to four times the poverty level would be eligible for subsidies to offset the cost of premiums. A public plan would lower the cost of federal subsidies by an estimated $80 billion over 10 years, generating savings to help finance premium subsidies for low-income families.

Benefit Standard. To guarantee an adequate level of coverage, an "essential benefit package," with varying levels of cost-sharing, would be offered through the exchange. All three congressional bills call for such a package, including hospital, physician, and preventive care, prescription drugs, and pediatric dental and vision services, among other services.

While keeping the benefits constant, the three congressional bills define three to four levels of cost-sharing tiers by actuarial value, or the average share of medical expenses covered by a health plan. The lowest-tier plans in both the House and Senate proposals cover less than what is covered by the typical insurance plan for workers and members of Congress. In the House bill, the actuarial value of the basic plan covers 70 percent of medical expenses and rises to 95 percent in the highest tier. In the Senate Finance proposal, the lowest-tier plan has an actuarial value of 65 percent and rises to 90 percent. By comparison, the average actuarial value in employer-based plans is an estimated 80 percent. The average actuarial value in the Blue Cross Blue Shield Standard Option in the Federal Employees Health Benefits Program, the typical plan for members of Congress and federal employees, is about 84 percent to 87 percent.

The bills also cap out-of-pocket spending. Spending is capped at $5,000 and $10,000 annually for individuals and families in the House bill. The Senate Finance bill caps spending at a higher limit, tied to the cap for health savings account/high-deductible health plans—which require that families spend more out-of-pocket. The limit is $5,950 for individuals and $11,900 for families, with reduced amounts for lower-income families.

Subsidies for Premiums and Cost-Sharing. The House and two Senate bills all provide assistance in paying premiums for families with income up to four times the federal poverty level (about $88,000 for a family of four). The House and Senate bills would set a maximum on the most that any family in this income bracket would pay for health insurance at 12 percent of income for higher-income families; the maximum is 12.5 percent of income under the HELP bill. Individuals with lower incomes or those covered by employer plans would pay less.

The chart below illustrates how the premium and average out-of-pocket costs would vary across income levels. Our analysis shows that total net premiums and out-of-pocket expenses would be higher at each income level in the Senate Finance bill, compared with the House bill. Reflecting this difference in subsidies, the Congressional Budget Office estimates that the cost of subsidies would be $773 billion from 2010 through 2019 in the House bill and $461 billion in the Senate Finance bill. 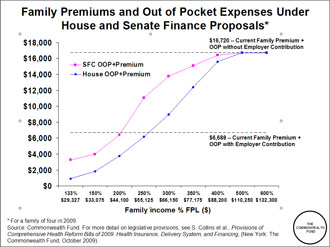 Employer Contributions. Requiring employers to contribute a share of an employee’s premium and setting standards on benefits will ensure affordability for most workers. The House proposal requires firms with more than $500,000 in payroll to contribute a minimum of 72.5 percent to individuals' premiums and 65 percent to families' premiums. If employers do not meet the standard, they must pay up to 8 percent of payroll into a health insurance fund. The Senate Finance bill does not require employers to provide coverage or contribute to a fund, but rather requires employers with more than 50 employees to pay a flat fee for workers who receive a federal premium subsidy for coverage purchased through the exchange. The Senate HELP bill requires firms with more than 25 workers to pay at least 60 percent of employees' premiums or pay a penalty of $750 per uncovered full-time employee or $375 per uncovered part-time employee.

Having employers contribute to coverage–as they now do for 162 million people–is extremely important to ensuring affordability. As shown in the chart, an average family with employers contributing to coverage could expect to pay $6,700 a year in premiums and out-of-pocket costs, while a family without employer contributions could expect to pay $10,000 more–or a total of $16,700.

Hardship Exemption. Finally, both the House and Senate Finance bills include hardship exemptions from the requirement that individuals purchase coverage to avoid penalizing those who can't afford coverage. The Senate Finance bill exempts those for whom premiums exceed 8 percent of income, effectively setting an “affordability” standard for coverage. The House bill has unspecified exceptions. The Congressional Budget Office estimates that 25 million Americans will remain uninsured under the Senate Finance proposal, compared with 17 million under the House bill.


Though these issues will be difficult to resolve, reaching consensus on what constitutes affordability and committing the necessary funds to achieve it are crucial in securing access to essential care for all and protection from the financial hardship that illness can now bring. Ensuring affordable health care for all will ultimately pay national dividends in terms of improved health and productivity of the workforce and economic growth.