The Affordable Care Act: Keeping Our Eyes on the Ball

In this post, Commonwealth Fund president David Blumenthal, M.D., and vice president Sara Collins, Ph.D., identify four questions whose answers will help us measure the Affordable Care Act’s success over the next year: Are the marketplaces fully operational by December 23?;  Are people enrolling in health plans?; Is the number of people who are uninsured falling?;  and Is the number of people who are underinsured falling?

With a 24-hour news cycle that tends to highlight only the latest story, it will be challenging to determine how successful the Affordable Care Act’s insurance reforms will be over the next year. How will we really know if the law is working as intended, and if and when its provisions need to be modified? Without critical metrics of success, it will be tempting, but likely misleading, to react to every technical glitch and anecdote, positive or negative.

The first is that the Affordable Care Act (ACA) is not really one plan, but 50—with each state making decisions on certain aspects of the plan, subject to federal requirements. Therefore, we should expect variation in the success of implementation from one state to another.

Second, the overall national success of the ACA should be measured against its aims. Its first and central goal is to guarantee affordable insurance coverage for nearly all Americans. It relies on three basic strategies to accomplish this:

Its second critical goal is to improve the performance of the health care delivery system with respect to both efficiency and quality. Since the second is a longer-term objective, we’ll concentrate here on the law's aim to provide affordable insurance for Americans. 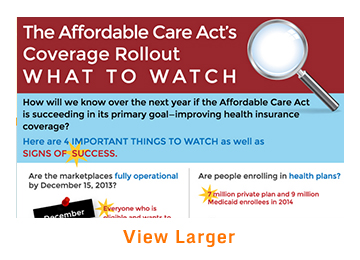 To measure success on the coverage side, there are several questions to consider.

Sixteen states and the District of Columbia are operating their own marketplaces, while 34 states have federally run marketplaces. Of those 34, 14 states have assumed primary responsibility for certifying health plans to be sold and/or consumer assistance in health plan selection. Both Healthcare.gov, the portal consumers may use to gain access to all of the marketplaces, and the state-run marketplace websites experienced significant technical problems in the first two weeks of enrollment, limiting people’s ability to enroll. Federal and state governments are working to repair these technology snags, as well as direct consumers to alternative enrollment methods such as by phone or mail. It is critical that everyone who is eligible and wants to enroll by Dec. 23 is able to do so.

2. Are people enrolling in health plans?

How many people enroll in health plans through the marketplaces will be a key indicator of how consumers view the desirability and affordability of new coverage options.

The Congressional Budget Office (CBO) projects that 7 million people may enroll in private health plans sold through the marketplaces for coverage during 2014. An additional 9 million people are expected to enroll in Medicaid. To ensure that the marketplaces are successful and premiums are held in check, young people between 18 and 35 will need to enroll in large numbers. The Department of Health and Human Services (HHS) has said that it is important that more than 2 million of the new enrollees next year be young adults.

We think that if Americans enroll in numbers that come close to meeting CBO projections, we would declare the first year of the marketplaces a success.

HHS has said that it will provide monthly updates on enrollment. Some states that are running their own marketplaces are already reporting data on the number on applicants. In most states, as the Washington Post's Sarah Kliff points out, the online application process is multistep. People create accounts on the marketplace websites, apply for coverage, and then officially enroll by either paying their premium or requesting an invoice. Other people are applying by paper application. And others are applying directly through insurance companies. As of October 11, a round-up of press reports by the Advisory Board found that about 246,000 people created accounts on state marketplace websites, 122,000 had applied for coverage, and about 20,000 had enrolled. In Connecticut there are signs of significant interest among young adults. Of the 1,150 applications that were processed in the first week of enrollment, 29 percent were from applicants under age 35.

3. Is the number of people who are uninsured falling?

In 2012, 48 million people were uninsured. HHS estimates that about 41 million of them are eligible for one of the law’s new coverage options. Not everyone who is eligible for coverage is expected to enroll all at once. The Congressional Budget Office is estimating that next year, about 13 million fewer people will be uninsured as a result of the law’s new coverage provisions, with the number of uninsured falling over time.

The first national estimates of changes in the number of uninsured Americans won’t appear until next September, when the Centers for Disease Control and Prevention is scheduled to release its U.S. insurance coverage estimates for early 2014 in the National Health Interview Survey. In December 2014, estimates from CDC will be available for the first half of 2014. These will tell us whether we are on track to meet CBO’s projected decline in the uninsured. If the Affordable Care Act meets or comes close to reducing the number of uninsured Americans by 13 million in 2014, we would consider this a significant success.

4. Is the number of people who are underinsured falling?

Many people who have health insurance are considered underinsured because they have high out-of-pocket costs, not including premiums, relative to their incomes. The Commonwealth Fund Biennial Health Insurance Survey tracks this measure. In 2012, an estimated 30 million people ages 19 to 64 were underinsured. Analysis by The Commonwealth Fund has estimated that by providing more comprehensive benefits with greater cost protection, the Affordable Care Act has the potential to lower this number by 70 percent, or by about 20 million people, over the next decade. Next year, as people with inadequate health benefits in both individual and employer-based plans gain more comprehensive coverage and start to get health care under their new policies, we should begin to see reductions in the number of people who are underinsured. CBO has not estimated the impact of the law on the numbers of underinsured. In our view, reducing the number of people who are underinsured by about 5 million people in 2014 would constitute a significant success for the law.

The questions to ask in ascertaining the ACA's long-term success, to be measured over the next decade, will be the same as the short-term metrics outlined above, with the following additional questions:

Achieving the Affordable Care Act’s goals will require careful tracking of Americans’ experiences with the law and the willingness to make adjustments to its provisions when necessary in the years to come.