According to the Medicare Rights Center’s new report, A Bridge to Health, people who become eligible for Medicare in states without a comprehensive transition plan could face gaps in coverage, avoidable out-of-pocket costs, duplicative insurance premiums, and/or penalties for late enrollment.

Medicare Transitions: Who’s at Risk?
Transitioning into Medicare can be a complicated process for anyone. But states and the federal government should pay particular attention to:

Simplifying Enrollment for All 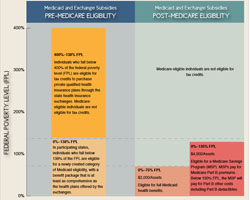 To prepare for 2014—when the major provisions of the Affordable Care Act take effect—state and federal agencies need to consider how Medicare’s eligibility rules and enrollment systems correspond to new rules and systems developed under the reform law.

The Affordable Care Act creates a streamlined and mostly automated eligibility determination and enrollment process for Medicaid and private plans offered through the exchanges. Individuals can simultaneously apply for Medicaid and premium tax credits that help pay for an exchange’s private plans using a single, simplified application that can be submitted online, in person, by telephone, or by mail.

In addition, beginning in 2014, the Affordable Care Act simplifies eligibility for Medicaid . It eliminates the consideration of someone’s assets, which will decrease barriers for applicants and save the states administrative costs associated with this review, and standardizes the way income is counted by using the income a household reports on their federal tax return. The law expands eligibility for Medicaid to 138 percent of the federal poverty level, or just under $32,000 for a family of four, though states can choose not to expand their programs.

The law does not extend the simplified eligibility requirements to people who are “dually eligible” for both Medicare and Medicaid. But through 2015, states can receive increased federal funding to redesign and simplify enrollment systems for everyone who is eligible for Medicaid, including those who are dually eligible for Medicaid and Medicare. If states take the extra step of simplifying Medicaid enrollment for all, they will lower the risk that dual eligibles, who are older or disabled and have low-incomes, will have complicated enrollment transitions into Medicare.

To help ease transitions to Medicare, the federal government and states should also:

These and other measures are discussed in greater detail in A Bridge to Health. By taking these steps, state and federal governments can help ensure that people who become eligible for Medicare are protected from gaps in coverage and unnecessary out-of-pocket costs that could put their health and economic security at risk.

J. Baker and D. Goggin-Callahan, How States Can Simplify Transitions to Medicare Under the Affordable Care Act, The Commonwealth Fund Blog, January 2013.