In Pursuit of Better Care at Lower Costs: The Value of Cross-National Learning

Earlier this month, a series of Commonwealth Fund–supported articles describing international efforts to achieve better health care at lower costs appeared in the leading health policy journal Health Affairs. Several of these publications are particularly relevant to the implementation of the Affordable Care Act: Germany’s work with bundled payments, the Swiss and Dutch experiences with health insurance exchanges, and many countries’ efforts to strengthen their primary care systems. Others offer more general insights into ways to contain health care costs, including through value-based insurance design, pharmaceutical policy, and volume and price strategies.

The Commonwealth Fund supports cross-national studies of fundamental health care issues because we believe such work has never been so important. First, international comparisons create and sustain the impetus for change by showing where we—and other countries—can do better. Alternatively, having examples of countries that excel shows us what is possible. As work by the Institute of Medicine, World Health Organization, and The Commonwealth Fund has demonstrated, our nation lags other countries on most dimensions of performance, despite the significant resources we devote to health care. While there are pockets of excellence in our health system that are admired worldwide, the notion that we have the “best health care in the world” is completely untenable. We know we can do better.

Fortunately, international research has the potential to generate insights into how to manage shared problems. Despite differences in our political cultures and approaches to financing and organizing our health systems, most developed nations deal with similar issues and rely on similar solutions at the grass roots, where clinicians give and patients receive care. The problems include finding optimal methods for treating chronic conditions, coordinating care in fragmented systems, and ensuring that care is affordable and respects patients’ values and preferences. For the most part, we also use similar resources to deal with these issues: health professionals with similar training (often using the same textbooks and literature), a common body of evidence-based approaches to care, and a shared array of drugs and devices. With shared problems and similar tools, only so many solutions make sense.

It is clear that the United States now has a unique opportunity to inform our sister nations in the health sector. No other country in the world has tried a health system overhaul such as the one we are attempting with the implementation of the Affordable Care Act and associated public and private efforts to improve health system performance. In the U.S. today, innovative payment and delivery system changes are rolling out at a rapid pace, and millions of new patients will be eligible for health insurance next year. 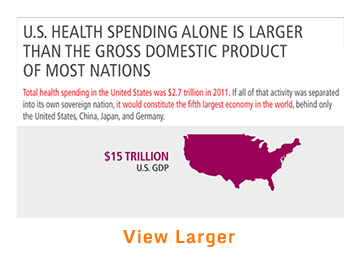 The audacity of these changes is magnified by the sheer size of our health system. Total health spending in the United States was $2.7 trillion in 2011. If that activity were separated into its own sovereign nation, it would constitute the fifth-largest economy in the world, behind only the United States, China, Japan, and Germany. In no other sector does U.S. spending so dwarf the economic output of most developed nations.

The dramatic changes in our health care system are worth close observation, and both drawing from and contributing to the body of international health policy research will be an important responsibility for health services researchers and policymakers going forward. Importing and adapting promising innovations, tools, and practices from our international peers can improve our performance. Similarly, exporting the lessons we learn as we undergo dramatic health system transformation may help improve outcomes and experiences abroad. The Commonwealth Fund remains committed to participating in such efforts at cross-national learning and shared progress.

D. Blumenthal and R. Osborn, In Pursuit of Better Care at Lower Costs: The Value of Cross-National Learning, The Commonwealth Fund Blog, April 2013.

A Fall COVID-19 Booster Campaign Could Save Thousands of Lives, Billions of Dollars