Even with the relentless spotlight on the Affordable Care Act, a new health issue is edging toward center stage: drug costs. The poster drug for this controversy is Sovaldi, a dramatically effective and extraordinarily expensive new agent for treating hepatitis C, which causes chronic liver infection.

The hepatitis C virus is smoldering, often without symptoms, in an estimated 3.2 million Americans. Over time, it can cause cirrhosis, liver failure, and liver cancer. At Sovaldi’s current price of $84,000 per course, treating all infected Americans would cost more than $250 billion, about what we spend annually on all other prescription drugs combined ($263 billion). These costs likely would not be incurred in a single year, and price competition may bring them down as similar new drugs come on the market. But the prospect of spending so much on a single agent for a single condition has galvanized concern over future drug costs.

That concern is justified. Historically, increasing pharmaceutical expenditures have helped drive up overall health care costs. As the figure below suggests, drug spending increased rapidly in the 1990s, peaking at 15 percent annually in 2000. In recent years, drug spending levels have ebbed, reflecting a fall-off in new products and the substitution of generics for blockbusters going off patent. 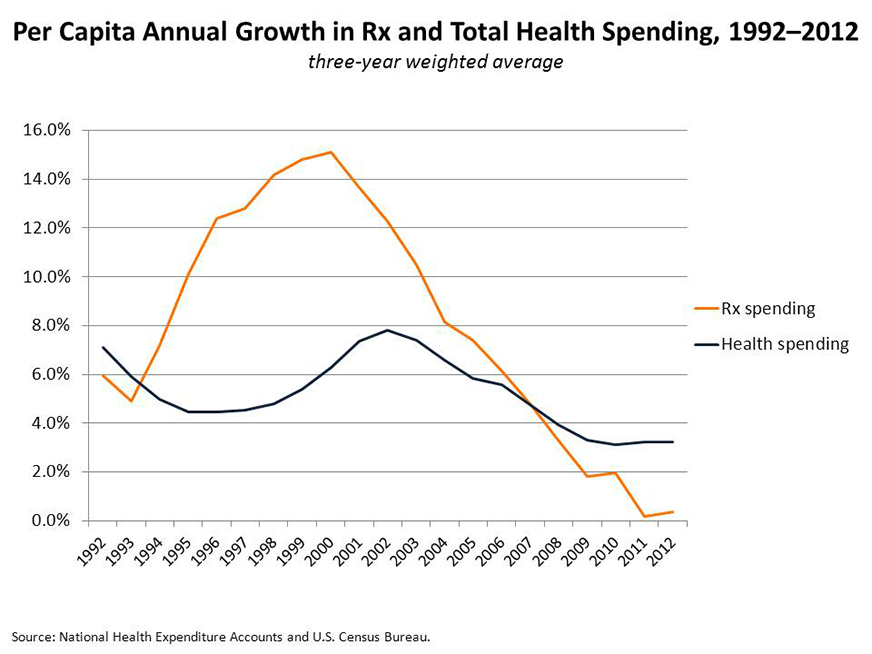 The lull appears to have ended. For years, scientists and analysts have predicted that biomedical breakthroughs would spawn an explosion of expensive new agents that are tailor-made to counter the underlying causes of disease, genetic and otherwise. It turns out, for example, that even a relatively rare genetic disorder like cystic fibrosis (CF) is not one disease, but many, each caused by a unique genetic abnormality. Scientists can dramatically improve treatment if they develop drugs that specifically correct the different problems created by each genetic defect. This approach is sometimes called personalized medicine. In fact, it might be more accurately called scientific design. It substitutes laser-guided attacks on disease for the traditional approach, which is more like carpet bombing.

The clinical results can be dramatic, enhancing both length and quality of life, but the costs are also eye-popping. Kalydeco, the first CF drug targeting a specific underlying genetic defect, will cost $294,000 a year for each of the 1,200 patients who will benefit—out of about 30,000 with CF in the U.S.—for a total cost of $353 million annually. Already, state Medicaid programs and insurers are balking at the costs of both Sovaldi and Kalydeco. The nation’s total prescription drug bill grew a whopping 12 percent over the 12-month period ending May 2014, according to the Altarum Institute.

The obvious question is why drug companies are charging such seemingly exorbitant amounts for these new products. One reason is because they can. Their patents grant them a monopoly on life-saving treatments. A second reason is that, because the drugs are so precisely targeted, they may benefit relatively small numbers of patients. Companies claim they have to charge more per user to recoup the costs of drug development. Nevertheless, critics argue that prices are higher than needed to make back those costs plus a healthy profit. Gilead Science, which makes Sovaldi, is reporting net income approaching $6 billion for the first half of 2014—four times what it earned during the same period a year ago.

In any case, if more and more of these drugs come on line, the aggregate expense of providing them to eligible patients seems likely to skyrocket. This would create huge new challenges in balancing high health care costs against other pressing societal imperatives, such as education, housing, transportation infrastructure, and the very research and development that has spawned the new treatments.

To prepare for this impending challenge, a number of options exist.

First, comparative effectiveness research to assess the added value of new agents will be essential. Some will have near-miraculous effects, but others will not add much to existing care.

Second, we must find ways to make new treatments affordable, and to prevent drug manufacturers from earning extraordinary profits using the monopoly powers granted them under current patent law. As priced now, a string of Sovaldis and Kalydecos could force reconsideration of the extent and duration of today's patent protections.

Third, and relatedly, the Food and Drug Administration (FDA) needs to do everything it can to ensure that less expensive alternative drugs become available as soon as possible. In this regard, the FDA has been slow to establish a regulatory pathway for generic and “bio-similar” alternatives to new biological products that constitute some of the specialized pharmaceuticals coming on the market. These biological products can be complex molecules—such as antibodies—produced by reengineered living organisms. Even when patents expire, imitating the original compound can be tricky and requires new, more subtle regulations. European countries have developed these regulatory pathways, but the United States has not.

Fourth, the U.S. health system must redouble efforts to eliminate the wasteful practices that drive up our health care spending and make it more difficult to afford the potent new treatments flowing from our biomedical research enterprise. With the advent of these new agents and the trade-offs they demand, a dollar wasted on unnecessary or ineffective care could mean life-saving or life-altering treatment denied another patient.

Tough as it is, having highly effective but expensive new treatments is a good problem to have. These drugs mean longer, better lives for humans the world over. We need to foster competitive markets and public policies that enable us to benefit from the research triumphs that are finally coming our way.

Making It Easy to Get Mental Health Care: Examples from Abroad

The Xavier Becerra HHS Hearings: What Congress Needs to Know