Sometimes the news is good.

Recently, the Centers for Disease Control and Prevention (CDC) released data showing that health care–acquired infections (HAIs) are decreasing in the nation’s hospitals. Dropping fastest are central line–associated blood stream infections (44 percent from 2008–12) and some surgical site infections (down as much as 20 percent). This means more people alive and less money spent on complications. We can squabble endlessly about how to define value in health care, but deaths avoided and dollars saved? That’s the real thing.

Now the questions are: how did we accomplish this and how can we build on success? The credit flows in many directions. 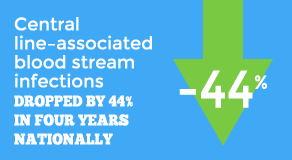 Decades of scholarship have demonstrated the toll that medical mishaps, including preventable infections, take on patients; these avoidable complications cause tens of thousands of unnecessary deaths and injuries every year in U.S. hospitals. The 1999 Institute of Medicine report, To Err Is Human, was a landmark document that focused attention on patient safety, and thousands of studies since then have illuminated the specific problems that compromise patient safety and how to solve some of them.

Government research agencies, such as the Agency for Healthcare Research and Quality, funded many of these studies and have worked with private-sector groups, including hospital associations, the Institute for Healthcare Improvement, and a variety of regional improvement organizations and foundations to get the word out. Stakeholders hammered out valid, reliable, and widely accepted measures of infections that resulted in National Quality Forum–endorsed standards. The CDC has tracked infection rates, giving hospitals benchmarks against which to measure their own progress, and the Centers for Medicare and Medicaid Services has implemented new programs, established under the Affordable Care Act (ACA), that penalize hospitals with large numbers of preventable infections. The ACA also created a national network of hospitals to support improvements in patient safety.

The lesson: progress is possible when you have good scholarship documenting a really bad, solvable problem and then mobilize both the government and the private sector to take it on.

There is a lot more work to do. Some states are doing much better than others in tackling health care–acquired infections, as the infographic shows. Lagging states need to learn from leading ones. Progress is not uniform across the different types of infections. The number of catheter-associated urinary tract infections has actually increased slightly (3 percent).

But with so much to complain about in health care, we should take heart when science, government, and the private sector point the way toward a higher-performing health care system. And we should be realistic about what is required to maintain progress: we need government-supported scholarship to create a sound evidence base, private-sector leadership to implement new findings, and government regulations and incentives to spur that leadership on.