This has been a good couple of weeks for folks concerned about the value of health care in the U.S. Last week, I commented on the fall in health care–acquired infections from 2008–12, as reported by the U.S. Centers for Disease Control and Prevention (CDC). This week, another CDC report, published in the New England Journal of Medicine, finds that between 1990 and 2010, complication rates among  US diabetic patients fell sharply. The most dramatic reductions were in heart attacks (down 68 percent) and deaths from uncontrolled blood sugar (or hyperglycemic crisis, down 64 percent). Amputations and strokes also dropped significantly. The bottom line: patients with diabetes were better off in 2010 than in 1990.

As a primary care physician who practiced throughout this period (and well before), I find these data especially gratifying. They may mean that all those hours I and my colleagues spent checking patients’ feet and adjusting medications to control blood sugars, blood pressures, and lipid levels actually paid off.

Early in my career we were blasé about blood sugars, cholesterol levels, and blood pressures. For example, we accepted blood sugar levels in the 200s and 300s when the normal range is 60 to 120 mg/dL. But science changed our understanding of optimal care. Especially important was the 1993 Diabetes Control and Complications Trial (DCCT) led by my colleague at Massachusetts General Hospital, David Nathan, M.D. The DCCT showed that tight control of blood sugar reduced complications among Type 1 diabetes patients. Later studies showed that tight control of lipids and blood pressure reduced complications in patients with Type 2 diabetes. The levels we tolerated during my first 15 years of practice are hair-raising by today’s standards. 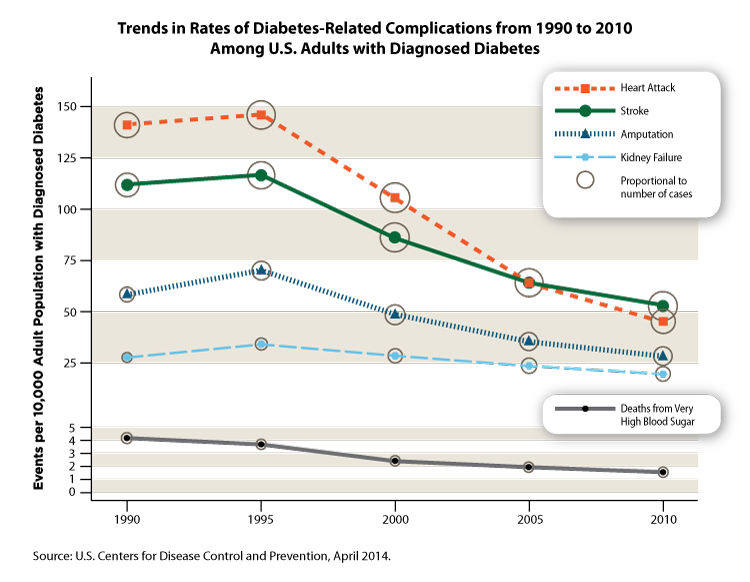 New knowledge was essential to the positive changes documented by the CDC, but other factors also were likely at work. As the authors of the study comment, “These findings probably reflect a combination of advances in acute clinical care, improvements in the performance of the health care system, and health promotion efforts directed at patients with diabetes.”

One of the biggest advances in health promotion has been reduced smoking rates among people with diabetes and other groups. In acute clinical care, the availability of new drugs to reduce lipids and blood pressure has been a boon.

And in health system performance, which is of special concern to The Commonwealth Fund, a number of advances may be having an effect. The advent of quality rating systems, such as the Healthcare Effectiveness Data and Information Set (HEDIS), used by health plans to measure care quality, and of provider pay-for-performance programs that target blood sugar levels among people with diabetes, may be sensitizing clinicians to the importance of good diabetes care. Over the years, The Commonwealth Fund has supported numerous studies showing that health care providers can improve diabetes control through a variety of interventions, such as public reporting of quality data  and intensive outreach to patients.

Electronic health records (EHRs) and team-based care also may be helping. When I left practice in 2009, my EHR was generating a checklist of tasks for visits with diabetic patients that included data on when I had last checked their feet, blood sugars, blood pressures, and lipid levels. The EHR also generated graphical displays of key physiologic parameters over time, and compared each patient’s results with recommended levels of control. I also partnered with a nurse practitioner who helped in the routine care of many diabetic patients.

So let’s give the health system a pat on the back. But let’s not get carried away. While the likelihood that any individual with diabetes will suffer a heart attack or stroke has declined, the societal burden of diabetic complications is about to explode. The CDC report documents a tripling of the number of Americans with diabetes between 1990 and 2010—from 6.5 million to 20.6 million. This will create huge strains on our health care system, no matter how well it performs.

Another problem, revealed in an upcoming Commonwealth Fund report, is vast disparities across populations and regions in the United States in the availability of preventive and primary care, which are so essential to reducing diabetic complications. Lack of health insurance reduces access to life-saving preventive diabetic services, as does inadequate insurance that fails to cover preventive care. The Affordable Care Act (ACA) will help address some of these problems through its expansion in affordable coverage and requirements that insurance pay for preventive services. But the ACA likely will not be sufficient. The Congressional Budget Office estimates that 30 million Americans will remain uninsured when the law is fully implemented.

To deal with the looming burden of diabetes-related illness—and the consequences of the many other chronic diseases that afflict our aging population—we need to double down on the successes we have enjoyed recently in improving health system performance. And we need to ensure that every American has affordable health insurance that provides access to a high-performing health system.

Why Have Some States Pulled Ahead in the Race to Vaccinate Against COVID-19?