The Ramifications of Repealing the Individual Mandate

Although it survived the 2012 Supreme Court challenge, the Affordable Care Act’s (ACA’s) individual mandate requiring most Americans to obtain insurance or pay a penalty remains broadly unpopular.1  Most legislative proposals to modify the ACA would eliminate this requirement, which—along with subsidies to make coverage affordable and bans on denying people coverage or charging them more on the basis of their health—is critical to achieving the law’s goal of near-universal coverage. In this post, we explore the effects of eliminating the mandate on health insurance enrollment and individual-market premiums. We find that repealing the requirement would significantly reduce health insurance enrollment and cause individual market premiums to rise.

Prior to the ACA, insurers in most states could deny coverage or charge higher premiums to new applicants based on health status. This practice not only led people to delay enrollment until they needed expensive health care but also made needed health care unaffordable for many people with preexisting conditions. The ACA ended this practice by requiring insurers to offer coverage to anyone who applies, and by prohibiting insurers from charging different premiums based on health status.

Without other incentives to enroll in insurance, this change could have led some people, especially those who were younger and healthier, to wait to get insurance until they got sick. The individual mandate, along with limited enrollment periods and subsidies, provide an incentive for young and healthy people to enroll, and thereby offset the expected costs of older or less-healthy enrollees.2  As a result, the requirement may serve an important purpose in expanding coverage while keeping premiums affordable.

To analyze the impact of dropping the requirement, we used RAND’s COMPARE microsimulation model, and conclude, based on pre-ACA enrollment data and other factors such as subsidies and premium changes that might influence enrollment decisions, that 12.3 million fewer people would have insurance if the mandate were repealed (Exhibit 1). Our model suggests that 21.9 million people will have gained insurance coverage by 2017 under the ACA, so the 12.3 million reduction rolls back 56 percent of the insurance gains. These results are consistent with findings from other research organizations, which have estimated coverage reductions in the range of 8 million to 16 million.3,4,5

Exhibit 1. Estimated Health Insurance Enrollment in 2017, With and Without the Individual Mandate, U.S. Population under Age 65 (in millions)

About half of the 12.3 million people who eventually would drop coverage would come from individual market plans, including those purchasing plans inside and outside of the ACA’s health insurance marketplaces, while the remainder would drop employer coverage or that through Medicaid and the Children’s Health Insurance Program (CHIP). The proportional decrease in enrollment would be largest in the individual market because it absorbed many people who newly gained insurance under the ACA. Disenrollment from Medicaid would occur because a substantial share of Medicaid-eligible individuals have incomes above the tax-filing threshold and are thus currently subject to the mandate. These individuals might choose to forgo coverage because of factors such as perceived hassle or discomfort associated with Medicaid.

Repealing the requirement would cause individual-market enrollment to decline by about 25 percent, with the largest losses occurring among the young and healthy. Consequently, individual market premiums in 2017 would increase by 8 percent (Exhibit 2).6  Eliminating the requirement would have two separate effects on individual-market enrollment. First, some people would drop individual-market insurance simply because they are no longer required to carry it; 3.9 million people fall into this category. Second, premium increases driven by healthier enrollees leaving the individual market would have spillover effects, causing others to disenroll. We estimate that another 2.1 million people would disenroll from the individual market because of the resulting premium increase. 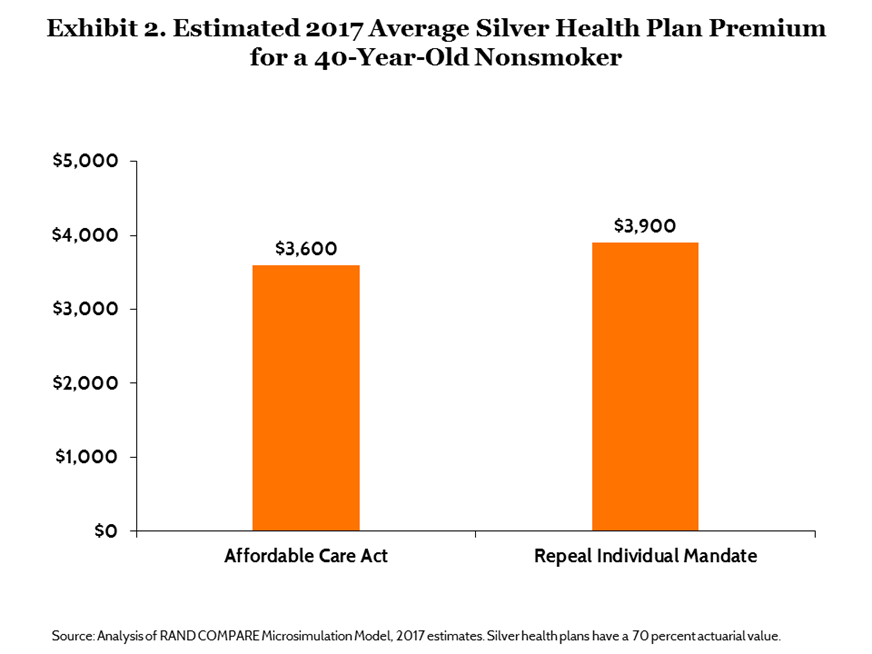 Although the 8 percent premium increase may not substantially destabilize marketplaces in most states, coverage losses would be significant. Because rising premiums would increase the government’s per capita subsidy costs and revenue from the individual mandate would be lost, federal expenditures per enrollee also would rise. Federal and state spending on uninsured people who face health emergencies also could increase.

Policymakers seeking to eliminate the individual mandate may need to develop alternative mechanisms for managing costs if they want to avoid these adverse effects. Two ideas that have been suggested recently include replacing the requirement with a late-enrollment penalty, or allowing insurers to increase premiums based on preexisting conditions for enrollees who have a coverage gap.

It is unclear whether late enrollment penalties or increased premiums for preexisting conditions would be as effective as the individual requirement to have insurance. Potential enrollees are likely more responsive to a definite penalty paid each tax season than to an uncertain penalty that could be imposed much later, such as an upcharge for a condition that might develop years in the future. There also could be pressure to waive or reduce late enrollment penalties for people who develop serious conditions. The Obama administration has already come under pressure to allow uninsured women who become pregnant to obtain insurance outside of the annual open enrollment period. Constructing an effective replacement for the individual mandate, therefore, could be a daunting task.

This post is the first in a series analyzing proposals that seek to change provisions in the ACA.

2In 2016, the individual mandate penalty will be the greater of $695 per adult and $347.50 per child up to a maximum of $2,085 per family, or 2.5 percent of family income. The penalty cannot exceed the national average premium for a bronze plan purchased on the health insurance marketplaces.

6 We previously estimated that individual market premiums would increase by 7 percent if the individual mandate were eliminated in 2015. The impact in 2017 is larger because the individual mandate penalty increases between 2015 and 2017. See C. Eibner and E. Saltzman, Assessing Alternative Modifications to the Affordable Care Act, RR-708 (Santa Monica, Calif.: RAND, 2014).