The 2016 Affordable Care Act (ACA) marketplace open-enrollment period is well under way, and many health officials, policymakers, and community leaders are looking to boost health insurance coverage rates. Despite the significant drop in uninsured rates over the last two years, an estimated 28.5 million Americans remain without coverage.1

One obstacle to higher enrollment is a lack of awareness of coverage options among uninsured individuals. A 2014 Commonwealth Fund survey found that 47 percent of the uninsured were unaware of the Medicaid expansion and financial subsidies for private marketplace plans.2 Recent research we conducted with Commonwealth Fund support suggests that there is variation in such awareness across racial/ethnic groups, which may contribute to ongoing disparities in coverage. In our study of three states, we find that Latinos are the least informed, compared with white, black, and other respondents, about new coverage options under the ACA.3 While Latinos experienced some of the greatest gains in coverage under the ACA, they remain at highest risk of being uninsured.4

The Lag in Latino Enrollment

It is well established that coverage rates for Latinos lag behind those of other demographic groups.1,4,5 Some potential explanations include Latinos’ self-perceived lower need for health insurance, low levels of health care literacy, the potential legal complications and fear associated with residing in mixed immigration-status households, and language barriers.6 There is also mounting evidence that Latino’s lack of awareness of the ACA contributes to this lag.

In our survey of nearly 3,000 low-income residents in Arkansas, Kentucky, and Texas, we found that Latinos are less likely to be aware of the ACA than other ethnic/racial groups, even after accounting for education, income, age, and other demographic factors. Surprisingly, our results suggest language barriers do not play a major role in awareness levels; even after adjusting for language, Latinos had much lower rates of awareness of the ACA’s coverage options than other groups. 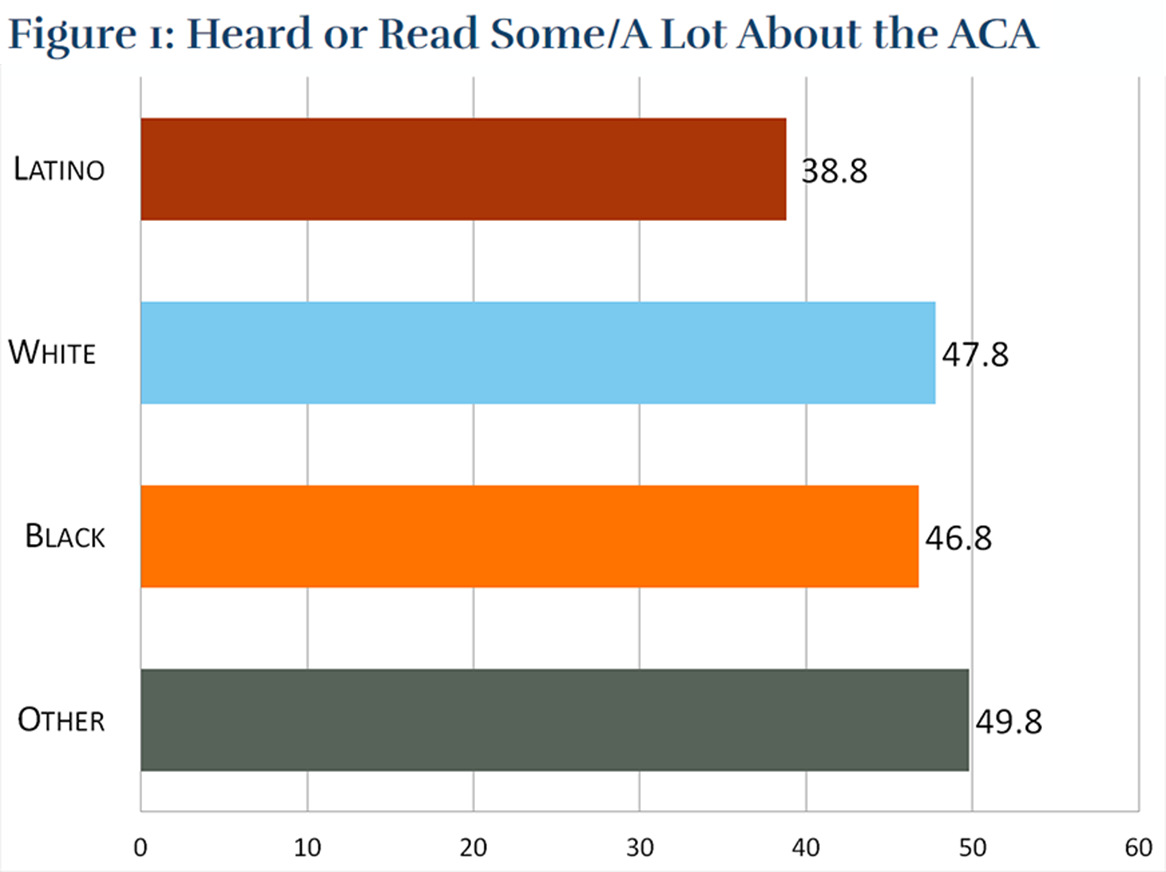 Our study also showed that greater awareness of health insurance options under the ACA was a powerful predictor of whether a person ultimately applied for and obtained coverage.7 Thus, low awareness of the ACA likely exacerbates high uninsured rates among Latinos, while raising awareness could increase coverage rates for this group.

So how might policymakers and consumer advocates disseminate health insurance information to reach Latinos? To answer that question, we compared the three states’ approaches to the Medicaid expansion and ACA-related outreach. Arkansas adopted a private option in which federal funds are used to purchase private insurance plans for those that qualify for Medicaid, but also enacted laws that restricted outreach efforts. Kentucky implemented a traditional Medicaid expansion, and used aggressive outreach efforts to raise enrollment rates. Finally, Texas did not expand Medicaid, and passed legislation that restricted the use of navigators to help consumers enroll in coverage. These differences are noteworthy in part because a substantial portion of the large reduction in uninsured rates came from the ACA’s expansion of Medicaid eligibility to individuals with incomes under 138 percent of the federal poverty level (about $16,000 a year for a single adult) in states that chose to participate.

Our study found that low-income Latinos were much more likely than members of other groups to receive help from marketplace navigators and application assistors, consistent with initial reports from experienced navigators.8 More generally, we found that navigators and application assistance programs were very effective at increasing the enrollment rate among would-be applicants. To support these efforts, the Centers for Medicare and Medicaid Services emphasized the Latino population when awarding the latest navigator program grants.9 In contrast, state regulations designed to impede application assistance are likely particularly harmful to minority groups. However, the sample size in our study wasn’t large enough to compare states by ethnic group. 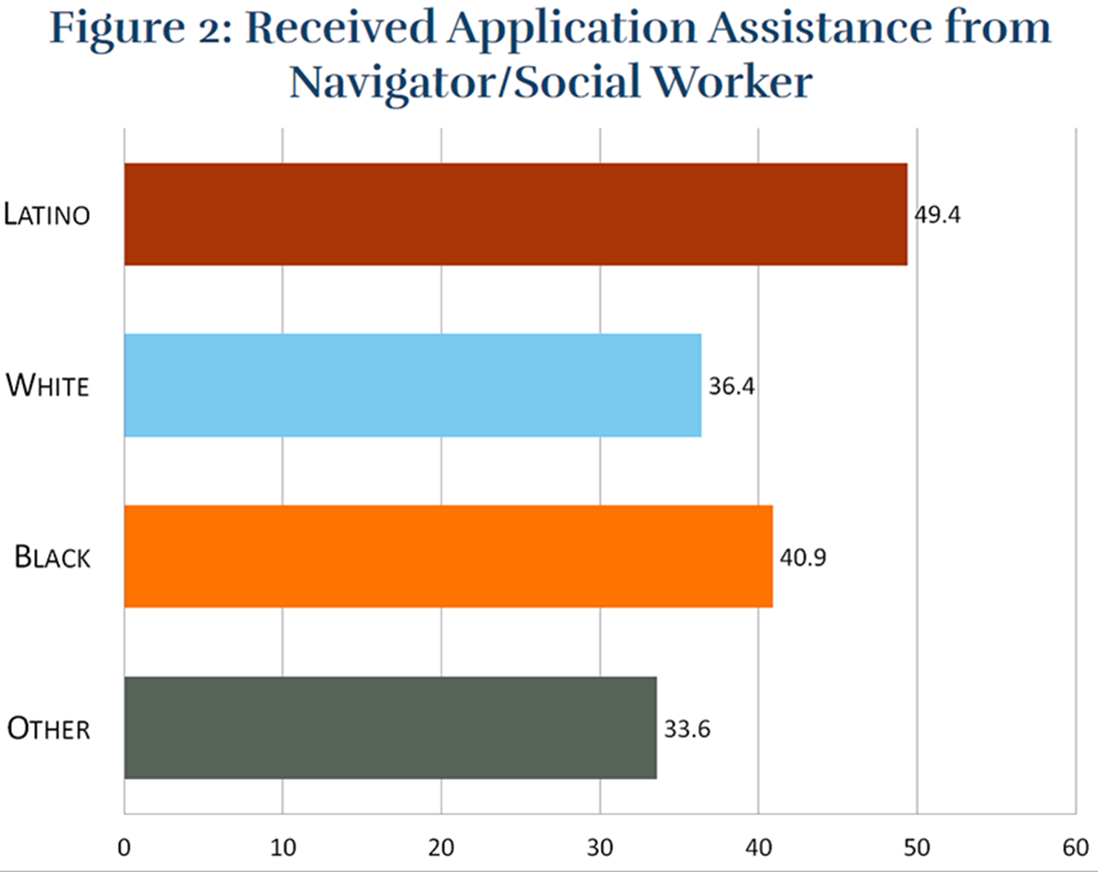 Moving forward, it will be important for policymakers and stakeholders to assess whether ongoing efforts are effective in enrolling Latinos and other groups in health insurance. With aggressive outreach, greater consumer awareness, and sustained application assistance, the ACA should be able to further two of its primary goals—expanding health insurance coverage and reducing disparities.

A. G. Mosqueira and B. Sommers, "Better Outreach Critical to ACA Enrollment, Particularly for Latinos," The Commonwealth Fund Blog, January 2016.

How Can States Improve COVID-19 Vaccination Rates in Their Medicaid Programs?

The Courts Weigh In on the Texas Antiabortion Statute