The Affordable Care Act’s state-based health insurance marketplaces were created to encourage insurers to compete for enrollees on price and quality. And indeed, marketplace consumers have, on average, 30 plans to choose from and 80 percent of them will have a monthly premium of $100 or less in 2017. The incoming administration and Congress’s proposals to repeal the ACA, however, will likely lead to fewer plan options and significantly higher premiums for consumers in 2018.

In the face of projections that repeal of the ACA will lead to 22 million to 30 million Americans losing coverage, some congressional leaders have called for a multiyear transition period. During this time, the ACA’s insurance reforms and subsidies would remain in place until a replacement plan is enacted. But the uncertainty that arises from this transition period, combined with an unforgiving insurance product and premium rate development calendar upon which the market relies, will cause major disruptions for consumers.

What’s the timeline for bringing a health insurance product to market?

Under normal circumstances, insurers start collecting key data and making strategic business decisions about participation, service areas, network designs, medical management strategies, and investments in marketing and customer service systems as much as 18 months in advance of issuing a policy. So the product teams at insurers considering marketplace participation in 2018 have already been meeting for several months. (When an insurer wants to develop and market an innovative product, provider network design, or managed care program, planning can start up to 24 months in advance.) Further, these companies are making decisions about their future products under the scope of existing federal and state rules, such as the requirements to cover a minimum set of essential benefits, meet actuarial value targets, and maintain adequate provider networks. Should those rules change, insurers will be forced back to the drawing board. 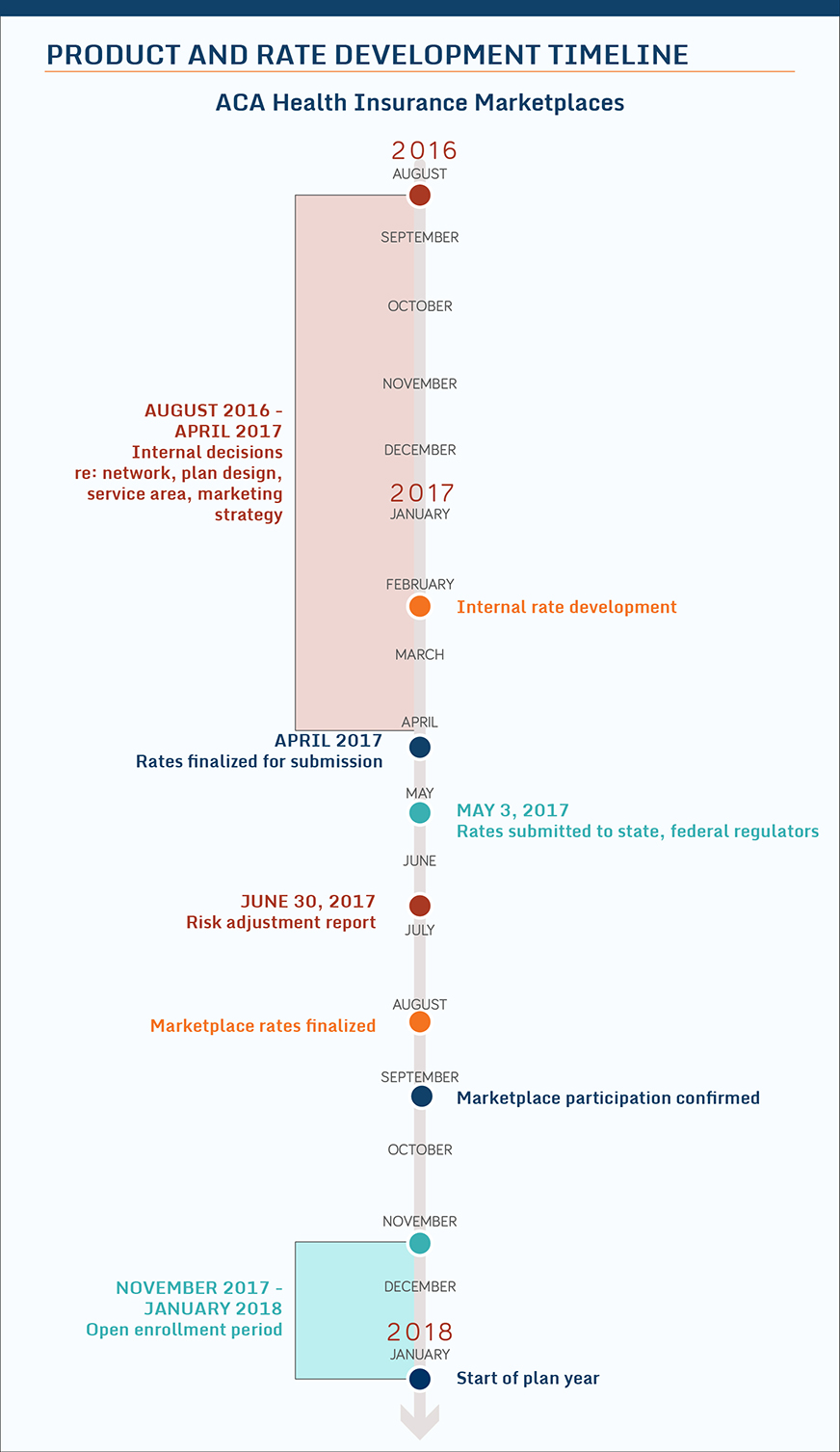 Determining a price for these products also takes many months, and the greater the uncertainty injected into that process, the higher the price will be. To develop an actuarially sound premium rate for 2018, most health actuaries will start assembling the required enrollment, claims, financial, and other data from 2016 in early to mid-February 2017. Insurers will then hone those rates based on their marketing strategy and emerging data about the past year’s claims experience and financial performance, both their own and their competitors’. The deadline for submitting rates for regulatory review is May 3.

Many state regulators will allow insurers to subsequently adjust their rates, but typically only in the event of major changes in public policy or in the market. This occurred in 2016, when a number of insurers increased their rates after the filing deadline following the exit of major competitors from the market. Insurers also may be allowed to adjust rates in the wake of an unexpected charge under the ACA’s risk adjustment program, which redistributes funds from insurers with lower-risk enrollees to insurers with higher-risk enrollees. Under the current regulatory timeline, the federal marketplace will consider insurers’ plan prices to be final by August 21, 2017. Insurers then have until September 15, 2017, to decide whether to commit to the marketplaces, scale back their participation, or exit completely. A new administration’s ability to adjust these deadlines is limited, assuming they want consumers to be able to shop for health plans during the open enrollment season for 2018, which begins November 1, 2017. State regulators are already challenged to conduct the necessary reviews within the current time frames, and it takes time to ensure that final plan designs and rates are loaded into and accurately displayed on the marketplace websites.

Insurers are capable of responding to changes in the legal and competitive environment, but their flexibility has limits and they are under tight timelines. Uncertainty about the rules under which they will operate in the future gives rise to uncertainty about how market competitors and current and potential enrollees will respond. This, in turn, will lead some insurers to scale down their marketplace participation or to leave the market entirely in 2018. Those that stay will need to factor the increased risk they face into the premiums they set. The new Congress and incoming administration will need to be cognizant of insurers’ schedules and the impact of policy uncertainty on their participation and premiums. The new leadership will need to signal early that they will take steps to stabilize the insurance market, allow insurers to do their jobs, and keep consumers covered.