AHCA Would Affect Medicare, Too

“Don’t touch my Medicare” has been a rallying cry in recent years, first as Congress considered health reform and now as it debates the fate of the Affordable Care Act (ACA). While the bill that would repeal and replace the ACA—the American Health Care Act (AHCA)—does not include explicit changes to Medicare, the legislation could have a profound impact on the 11 million Medicare beneficiaries who also rely on Medicaid for key components of their care. Here’s a look at how the AHCA’s major changes in federal funding for Medicaid would affect low-income older adults and the Medicare program.

Low-income Medicare beneficiaries who also are enrolled in Medicaid—often referred to as “dual eligibles”—could be disproportionately affected by congressional efforts to cut and cap federal Medicaid financing. Not only do these older adults account for one-third of all Medicaid spending, much of the Medicaid spending for low-income Medicare beneficiaries is “optional” for states.1 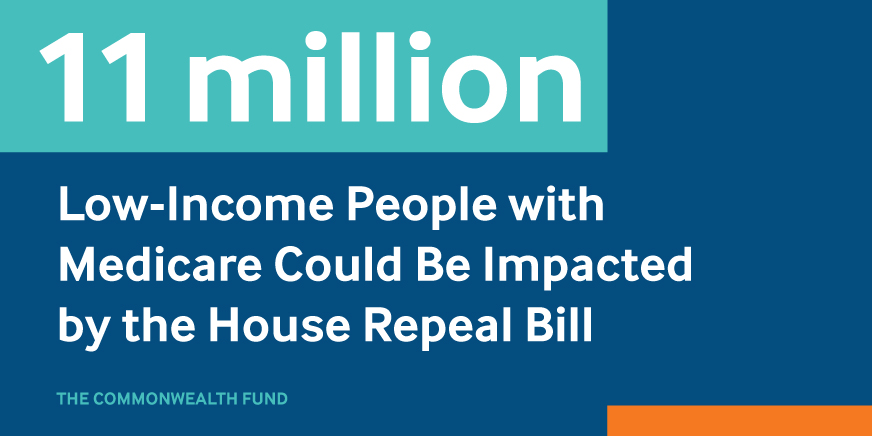 The nearly three-quarters (72%) of dual eligibles who receive full Medicaid benefits are most at risk under the AHCA’s funding caps.2  They tend to be in poorer health than other Medicare (and Medicaid) beneficiaries, and rely on Medicaid for high-cost services.3  While Medicare covers physician, hospital, and most other acute care, Medicaid covers some of dual eligibles’ behavioral health services as well as most of their long-term services and supports, such as nursing home and home and community-based services. Under federal law, many of these services are optional. Similarly, many low-income Medicare beneficiaries who qualify for Medicaid are “optional” beneficiaries who qualify only when they incur health and long-term care costs that are well in excess of their incomes. States can drop optional services and optional enrollees even without any new federal flexibility.

The AHCA’s Per Capita Caps Would Strain State Medicaid Spending

The AHCA’s Medicaid per capita caps would decouple the amount of federal financial support for Medicaid from actual costs, and provide up to a pre-set capped payment for the individuals enrolled. By contrast, today the federal government shares the actual cost of Medicaid expenditures on behalf of Medicaid beneficiaries. If the AHCA is signed into law, federal funding would be set based on state historic spending trended forward using national trend rates.4  The Congressional Budget Office projects that per-Medicaid enrollee health costs would grow faster than the annual increase in the capped federal payments, which is how the bill’s federal savings are achieved.

Although the bill includes a more generous growth rate for aged and disabled individuals than for other eligibility groups, its funding formula is unlikely to keep pace with most states’ spending on high-need, high-cost elderly and disabled populations, particularly over time. In addition, federal Medicaid spending would no longer adjust for new costs associated with breakthrough drugs and therapies, rising labor market costs, or changing demographics. Not only will there be more elderly individuals in the future, but more will be in the 85 and older age group, with greater health care needs and associated costs. In 2011, Medicaid spending for seniors over age 85 was, on average, more than double program spending for those ages 65 to 74.5

Pressure to constrain care for low-income Medicare beneficiaries also would arise because the AHCA would let states cross-subsidize funding streams across populations. This means that states could use the faster-rising allotment for elderly and disabled populations to fund services for other populations, including children and pregnant women (for whom the AHCA assigns more slowly rising rates of spending). While this approach could help states manage in the near term, it would not be sustainable, particularly given an aging population.

Locking states into a funding formula based on past Medicaid spending adjusted by a national trend intended to bring down federal spending will force hard choices for all states, but they would feel the impact differently. Consider some of the ways the AHCA would constrain spending on care for low-income Medicare beneficiaries:

Capping Medicaid Could Hurt the Medicare Program, Too

A cap on Medicaid funding not only would affect low-income Medicare beneficiaries, it also could affect the Medicare program because of the close connections between Medicaid and Medicare. For example, reducing the availability of Medicaid-financed home care services that help people manage their complex health conditions could mean that more dually eligible individuals wind up in the hospital more often. Those costs would be borne by Medicare.

The AHCA may on paper leave Medicare alone, but millions of Medicare beneficiaries and their families—and indeed the Medicare program itself—would feel its impact.