How Other Countries Achieve Universal Coverage

A country that offers universal health coverage is one in which everyone — regardless of their ability to pay — has access to essential health services. In 2010, the Affordable Care Act (ACA) created the first path to universal coverage in the United States; millions have gained coverage as a result. A bipartisan effort is currently under way in Congress to reinforce the ACA marketplaces, so more people can gain affordable insurance. But some policymakers are proposing alternative paths to universal coverage, such as a single-payer system, in which the government provides coverage financed by taxes. Most recently, Senator Bernie Sanders of Vermont introduced a bill that would replace the nation’s existing public and private health insurance system with a national health insurance program based on Medicare.

While the term single-payer is often used to describe the way a number of other nations with universal coverage organize their health systems, it glosses over significant differences across those systems. The Commonwealth Fund has created descriptions of the health systems of 19 countries. The summaries reveal a range of different paths to universal coverage, from government-financed and -run approaches to largely employer-financed systems administered by insurance companies.

The health systems we track that have achieved near-universal coverage can be grouped generally into three categories.

Financing and Care Delivery: This is a classic single-payer model, in which the government finances health care with general tax revenue and employs or contracts directly with health providers to deliver care. England’s National Health Service (NHS) is a good example.

Who Is Covered: In England, all residents are covered.

What Is Covered: The NHS provides comprehensive care, including mental health care and some dental and eye care, and there are no copayments or fees at the point of service. Around 10 percent of the population have limited private insurance through their employer, which gives them more rapid access to care from specialists or elective surgery, but everyone else relies exclusively on public coverage.

Financing and Care Delivery: The government sets national health policy and regulates private insurance and health care, but leaves insurance and the delivery of health services to the private sector. The Netherlands is a good example of this kind of approach. In the Dutch system, people pick an insurance company from a group of competing not-for-profit insurers. Employer and employee premium contributions are centrally pooled and then redistributed among insurers based on a risk-adjustment formula to prevent insurers from only choosing healthy enrollees. Insurers reimburse private providers for health care services, as is the case in the U.S.

Who Is Covered: In the Netherlands, as in the U.S., everyone is required by law to have health insurance unless they qualify for an exemption. The government provides subsidies to those with low-incomes to cover the cost of their premiums.

What Is Covered: The government defines the basic benefits package. A deductible must be paid out of pocket, but does not apply to primary care, maternity care, home nursing care, and care for children. Most Dutch citizens take out private insurance for items not covered under the basic package, such as eyeglasses and dental care.

Who Is Covered: In France, insurance is compulsory and all residents are covered.

What Is Covered: France’s publicly financed insurance covers a wide range of services, including prescription drugs and diagnostic tests. There is cost-sharing for doctor visits, inpatient stays, and dental and vision services, with exemptions for low-income people, those with chronic illnesses or disabilities, and pregnant women and children. About 95 percent of the population purchases or receives a government voucher to buy private insurance, similar to MediGap coverage in the U.S., to cover out-of-pocket expenses.

Universal coverage can be achieved in many ways. The ACA created a path to universal coverage by building on existing public insurance offered through Medicaid and making reforms to the private insurance market. More than 30 million Americans are now covered through these expansions. In some states, such as Massachusetts, California, and Minnesota, universal coverage has nearly become reality. If Congress doesn’t repeal the ACA, one option is to continue on that course, building on its successes by further strengthening individual insurance markets, improving outreach and affordability of subsidies, and encouraging the remaining 19 states that have not expanded Medicaid to do so. 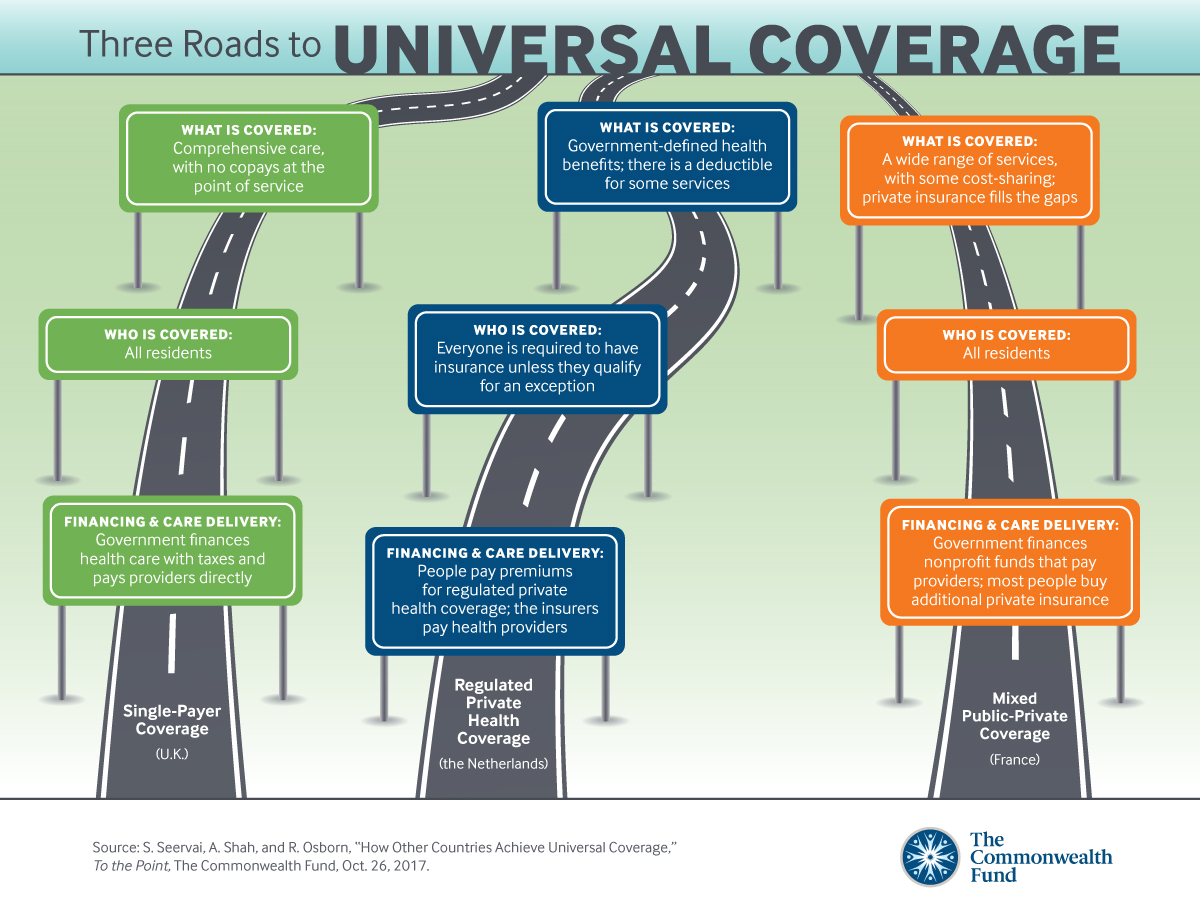