The ACA’s premium tax credits have been a stabilizing force for individual health insurance markets, which appear to have weathered recent actions by the Trump administration and Congress

The latest data suggest the individual insurance market is weathering attempts by the Trump administration and Congress over the past year to weaken it. These actions include the repeal of the tax penalty for going without insurance; ending payments owed to insurers for limiting low-income enrollees’ cost-sharing; promoting the sale of health plans designed to cherry-pick the healthiest and youngest enrollees; and ending most federal funding for efforts to inform Americans about their insurance options.

Despite these steps, enrollment in the Affordable Care Act’s (ACA) marketplaces is higher in 2018 than last year, as the administration itself reported in July. In addition, a new analysis by Matt Fiedler of the Brookings Institution finds that this year is shaping up to be not only the most profitable one for insurers selling plans in the individual market since the marketplaces opened in 2014, but also the most profitable year insurers have ever had in the individual market — including the years preceding the ACA. Looking ahead to 2019, the administration and other analysts are projecting marketplace premiums to rise an average of just over 5 percent. And, so far, more insurers are planning to participate in the marketplaces this year than last.

To be sure, there are storm clouds on the horizon. Some states may see much larger premium increases in 2019. According to Fiedler’s analysis, 2019 premiums likely would have fallen 4 percent if not for the actions taken by Congress and the administration. It also remains to be seen how many people will opt out of ACA-compliant plans and enroll in short-term and other limited-benefit plans, which could lead to sharply higher premiums in 2020. And the outcome of a lawsuit that could bring an end to the ACA’s preexisting condition protections may lead millions of Americans enrolled in individual plans to lose their insurance.

In response to these threats, 25 states and the District of Columbia have implemented at least one policy change designed to lower premiums and protect their markets, such as establishing a reinsurance program or imposing an individual mandate penalty. But other states have taken no action.

With the states’ individual markets remaining upright despite repeated pounding, it has become clear that the ACA’s premium tax credits have acted as a central stabilizing force. These tax credits subsidize the purchase of health insurance for Americans who lack access to employer plans or Medicaid and whose incomes fall between 100 percent and 400 percent of the federal poverty level (about $12,000 to $48,000 for an individual). Of the 10.6 million people currently enrolled in marketplace plans, 87 percent are receiving this help to pay their premiums. Without it, most people in this income range wouldn’t be able to afford their own insurance, and the individual market would consequently have far fewer enrollees. In 2010, four years before the ACA reforms began, 60 percent of people who had looked for or purchased a plan in the individual market reported that it was very difficult or impossible to find a plan they could afford.

The ACA’s premium tax credits, along with the law’s preexisting-condition protections, have made the individual market a much more viable alternative for families of modest income who lose, or have never had, job-based health benefits. A recent Commonwealth Fund survey found that nearly half of adults enrolled in marketplace plans with incomes under 250 percent of poverty (about $30,000 for an individual) paid nothing, or less than $125 a month, for their premiums. A similar share of people in that income range with employer coverage reported contributing that much to their premiums. 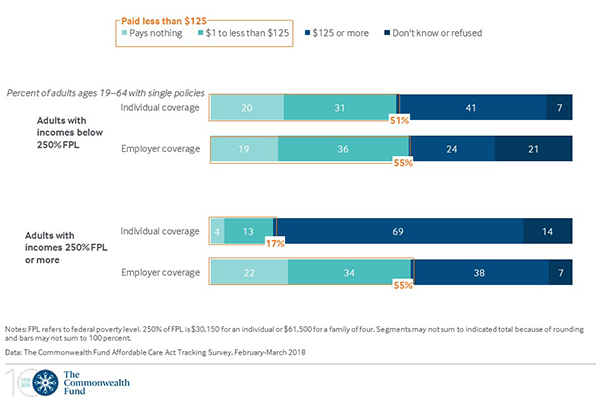 Still, our survey research shows that many in the individual market struggle to afford their premiums, and many of the poor are locked out of the market entirely. Adults with incomes above 250 percent of poverty pay more for marketplace coverage than they would for employer coverage, on average. And above 400 percent of poverty, people are ineligible for any support; they must pay the full premium.

People at the other end of the income scale are also vulnerable. Those below the poverty level living in the 17 states that have not expanded their Medicaid programs are also ineligible for tax credits. Among the nation’s remaining uninsured adults, the ability to afford health insurance remains the number one reason for going without.

Congress has clear options for expanding the generosity and availability of tax credits. Larger credits made available to more people would have the twin benefits of helping consumers afford insurance and further stabilizing the individual market. RAND researchers Jodi Liu and Christine Eibner estimate that enhancing the tax credits and lifting the 400-percent-of-poverty threshold for eligibility would reduce marketplace benchmark premiums by 3.1 percent and bring 3 million more people into the individual market, at a federal cost of about $19 billion in 2020. Similarly, Congress could extend tax-credit eligibility to adults living below poverty in nonexpansion states. Currently, 2 million uninsured people fall into this coverage gap.

Such policy changes wouldn’t just insure more Americans. They also would offer financial relief to moderate-income Americans whose wages have barely budged in recent years. And the sweetener may well be a healthier individual market.