The Trump administration continues to put its own stamp on American health policy at an accelerating pace. Among the latest examples is a guidance on “State Relief and Empowerment Waivers” released on October 22 by the U.S. Departments of Health and Human Services (HHS) and Treasury. This guidance describes the administration’s plan to support states in setting up systems for regulating and subsidizing insurance that are very different from those established by the Affordable Care Act (ACA) by granting waivers under section 1332 of the ACA.

State Innovation Waivers Under Section 1332 and the Obama Administration

Section 1332 of the ACA authorizes HHS and the Treasury Department to waive certain ACA provisions — those governing qualified health plans sold on the marketplaces and marketplace operations, cost-sharing reductions, premium tax credits, and the individual and employer responsibility requirements — for states that propose alternative approaches to offering coverage in the individual and small-group health insurance markets. If a waiver that is granted to a state reduces the amount that the federal government must spend on premium tax credits in the state, the federal government must “pass through” the savings to the state to fund its waiver program.

Section 1332 requires, however, that state waiver proposals stay within specified “guardrails.” States must provide coverage that is as comprehensive and affordable as ACA plans, and covers a number of state residents comparable to the number who would have been covered under the ACA. They must do this without increasing the federal deficit. Waivers also must be authorized by state legislation.

Guidance issued by the Obama administration in 2015 interpreted 1332 requirements quite conservatively. Although eight 1332 waivers have been granted so far, all but one of them were to establish reinsurance programs and did not significantly change the nature of the coverage offered within the state. More radical proposals have not made it through the 1332 approval process to date.

States granted waivers will still have to ensure the availability of comprehensive coverage meeting essential health benefit (EHB) requirements. But the guidance expands the universe of benchmark EHB plans that states could choose from to include not just their own state’s EHB benchmark plan but also any EHB benchmark plan chosen by any state or potentially permissible under regulations that recently expanded EHB options.

The Obama-era 1332 guidelines prioritized coverage for low-income, high-cost, and vulnerable populations. A reduction in projected affordability or comprehensiveness of coverage for these populations would have been fatal to a 1332 waiver application under the Obama guidance. Under the Trump guidance, waivers that would make coverage much more affordable for some people may be approved even though they make coverage slightly less affordable for others. Encouraging enrollment of healthy people in short-term health plans that do not cover preexisting conditions will almost certainly increase the cost of coverage for ACA-compliant coverage. While attention will be paid to the effect of waivers on low-income and vulnerable populations, adverse effects on these groups, such as increased out-of-pocket health care costs, will not necessarily kill a waiver proposal.

Section 1332 requires that a state adopt legislation authorizing a waiver, presumably to ensure that the waiver has solid support within the state. The new guidance, however, no longer demands state legislation authorizing a specific 1332 waiver program as long as a state has general legislative authority to enforce the ACA and the waiver is authorized under a state regulation or executive order.

The waiver guidance notes that the back-end functions of the federal information technology platform can now be customized to allow states to use different eligibility and enrollment rules and to create their own consumer-facing websites in place of HealthCare.gov, although it notes that the IRS has limited flexibility to handle alternative premium tax credit arrangements. States that run their own eligibility and subsidy programs, or contract with private vendors to do so, could conceivably subsidize association health plans or short-term, limited-duration coverage.

The Trump administration guidance sets out five principles that it will expect successful waiver proposals to advance:

Through its 1332 guidance, the Trump administration takes another step toward undermining the ACA and its goals. The Congress that enacted the ACA saw a legitimate role for an expanded Medicaid program for those who could not afford private insurance and believed that no one should have to accept inadequate insurance coverage because comprehensive coverage was not affordable.

Yet the association health plan and short-term, limited-duration insurance rules released earlier this year expanded loopholes within the ACA and preexisting law to create the possibility of alternative, non-ACA-compliant, insurance markets. The 1332 guidance encourages states to foster such markets, potentially even subsidizing enrollment in them. The guidance thereby creates a back door for essentially waiving ACA provisions, such as those requiring insurers to cover applicants with preexisting conditions, to cover treatment for preexisting conditions, or to permit policies with annual or lifetime limits, that cannot be directly waived through 1332. States could then realize any associated savings.

With its 1332 waiver guidance, the Trump administration is attempting to accomplish through administrative fiat changes in the ACA that Republicans repeatedly tried and failed to bring about through legislation in 2017. The waiver guidance, for example, resembles but goes even further than the Cruz Amendment to the Senate’s Better Care Reconciliation Act or the Graham-Cassidy-Heller-Johnson bill, which would have allowed coverage that is not legal under the ACA and funneled money directly to the states to spend on their own health coverage priorities. Like those bills, the 1332 guidance promises to further exacerbate differences in coverage between red and blue states.

Finally, it is remarkable that the administration is attempting to accomplish these major and controversial changes in policy through a simple guidance, effective immediately, rather than through a regulation subject to public comment. This approach will almost certainly subject the guidance, or waivers granted under it, to legal challenge. Once again, major health policy changes are being made by the administration, and ultimately by the courts, and not in Congress where they would seem to belong under our constitutional system. 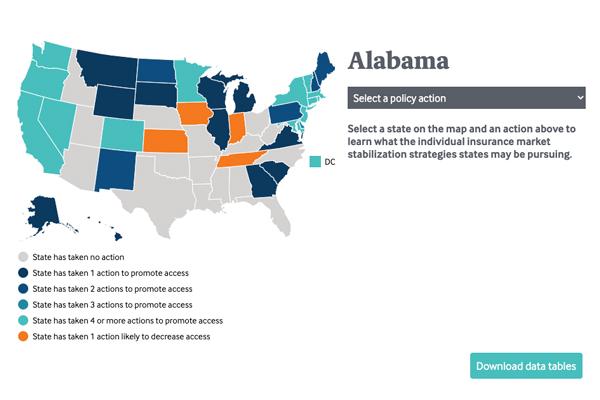