In March, Congress temporarily raised the share of Medicaid costs that the federal government will pay, in response to COVID-19. This short-term step granted states welcome fiscal relief, but as the depth of the economic crisis becomes clearer, so does the need for additional and more-targeted support.

Medicaid plays a unique, countercyclical role during economic downturns. Recessions, like the one we are now in, drive up Medicaid enrollment as people become newly eligible because of job losses and reduced earnings. However, because Medicaid costs are borne by states and the federal government, recession-related enrollment drives up states’ Medicaid spending at the same time revenues are plummeting. This puts pressure on states to raise taxes or make program cuts to balance their budgets. States are not likely to raise taxes during a recession and so, absent federal relief, they will be compelled to make deep cuts to Medicaid given the size of the program relative to state budgets.

In past recessions, Congress has supported states and protected coverage by temporarily increasing the federal share of Medicaid costs. That share is set according to a state-specific rate called the Federal Medical Assistance Percentage (FMAP), which ranges from 50 percent to nearly 78 percent in normal times. Some services and populations, such as the Affordable Care Act’s expansion group, qualify for a higher federal match. Congress temporarily boosted states’ FMAP during the 2001 recession and the Great Recession of 2007 to 2009, each time conditioning the higher FMAP on states not cutting Medicaid eligibility. States that accept the FMAP increase must keep their Medicaid eligibility standards intact. 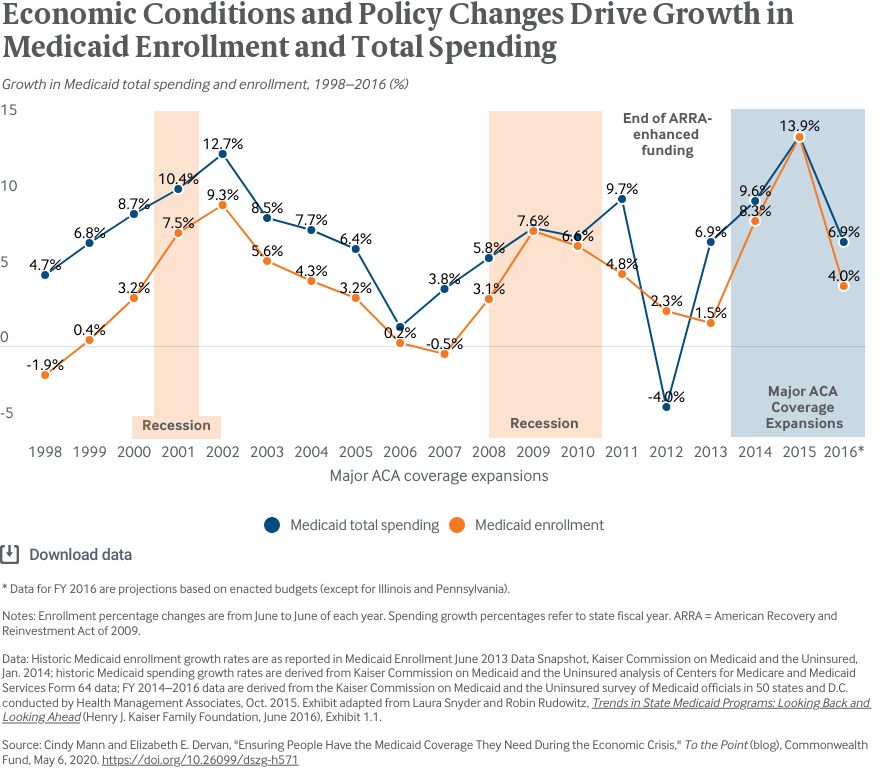 Early in the COVID-19 response, Congress enacted a temporary 6.2-percentage-point boost in the FMAP. Like its predecessors, this legislation conditioned the higher FMAP on states maintaining pre-COVID Medicaid eligibility standards and, given the importance of keeping people insured during the pandemic, added a provision that no one enrolled in Medicaid during the emergency period can lose coverage. The FMAP increase and coverage protections expire when the emergency declaration is lifted.

The Need for a Greater and More Targeted Response

Three issues will be important for policymakers to consider when they take up the next stimulus package: raising the 6.2-point FMAP increase linked to a requirement that eligibility standards stay in place; tying its duration to economic circumstances; and making an automatic trigger that adjusts the FMAP based on economic circumstances a permanent feature of Medicaid financing.

First, the economic fallout of COVID-19 is on track to be worse than the Great Recession. The U.S. Department of Labor has announced that 30 million people have filed for unemployment insurance since March 15, indicating that as much as 20 percent of the labor market is currently out of work. The Congressional Budget Office forecast unemployment rates of 11.4 percent in 2020 and 10.1 percent in 2021. By comparison, unemployment peaked at 10 percent in 2009. Given the impact of job losses and sharply curtained consumer spending on tax revenues, states are now projecting significant budget shortfalls.

The 6.2-point FMAP increase provided for COVID-19 falls well short — in fact, is only about half — of the relief provided during the Great Recession, when Congress raised the federal Medicaid match by a 6.2-point baseline and also provided additional state-specific FMAP increases based on state unemployment rates. The National Governors Association and the National Association of Medicaid Directors have identified a significant FMAP increase as one of their top COVID-related priorities.

To ensure that the higher FMAP not only results in state fiscal relief but also prevents the cuts in coverage that otherwise are likely to occur, it is essential to continue to condition extended FMAP relief on a requirement that Medicaid eligibility standards remain intact. Tens of thousands of hotel and restaurant workers, construction workers, and people who worked in retail trade and administrative positions are among those who have lost their jobs and their health insurance. If Medicaid eligibility is reduced, many won’t have the coverage they need during these extraordinarily difficult times.

Second, the economic crisis is likely to be prolonged, with an uneven recovery. The current FMAP increase will end when the COVID-19 emergency declaration is lifted, even though state economies will most likely still be in crisis with millions of families still out of work. This misalignment happened in 2011 when Congress’s time-limited FMAP increase ended and 10 states and D.C. still had unemployment rates at or above 10 percent. 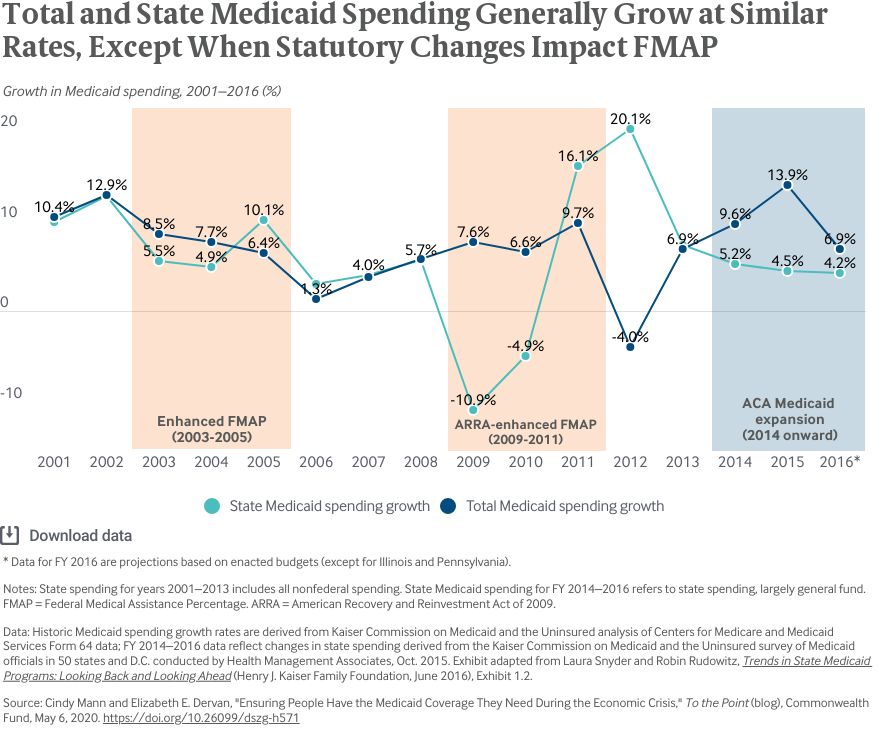 Tying the duration of the FMAP relief to state economic conditions rather than the end date of the emergency declaration offers a more data-driven approach to addressing state and family needs. The value of a state-specific automatic increase is clear given the pandemic’s geographically disparate rates of infection, disproportionate impact on industries that are prevalent in certain regions of the country, and the different paths states are taking to reopen their economies. In fact, House Democrats introduced a state-trigger proposal in March based on a framework advanced by the Brookings Institution that would raise or lower the FMAP based on a state’s unemployment rate. Over the years, others, including the Government Accountability Office, the Medicaid and CHIP Payment and Access Commission, and the National Academy for State Health Policy, have examined raising the FMAP automatically to respond to economic downturns or put forth specific proposals for how this might be designed.

Third, without a permanent fix, there is no guarantee that fiscal relief and coverage protections will be in place in the next recession, which may include a downturn associated with a new surge in COVID infections. Achieving such a fix would require that Congress make permanent the provision of a temporary FMAP boost triggered by a significant change in state economic conditions and tied to a maintenance of eligibility standards. This would help ensure that states and families receive assistance when it’s needed. While Congress raised the FMAP during the most recent recessions, legislation increasing the FMAP is not guaranteed. Further, when relief was provided in the past, the added funds were not available until after the recessions began and, for some states, the funds shut off while they were still facing significant fiscal stress. Predictable and well-timed relief is crucial to the recovery of state economies and to the health of communities.

Cindy Mann and Elizabeth E. Dervan, "Ensuring People Have the Medicaid Coverage They Need During the Economic Crisis," To the Point (blog), Commonwealth Fund, May 6, 2020. https://doi.org/10.26099/dszg-h571