All eyes and ears were focused on the Supreme Court on November 10th when it heard arguments in California v. Texas, the case challenging the constitutionality of the Affordable Care Act (ACA). While the case focuses on the validity of the individual mandate, a decision striking down that provision could bring down the entire law if the Court decides, as the Trump administration has urged, that if the mandate is unconstitutional the entire ACA must fall. That result would cause millions of people to lose coverage, particularly in the states that expanded Medicaid. The fate of the Medicaid expansion, however, is just one of the many ways the ACA impacts Medicaid.

Thirty-eight states and Washington, D.C. have adopted the Medicaid expansion. As of June 2019, nearly 15 million people were covered under the expansion; enrollment has grown sharply over the past several months as a result of pandemic-related job losses. In the nearly six years since the expansion has been in effect, research has shown how the Medicaid expansion benefits enrollees, states, and health care providers. The program also has helped to advance equity goals. 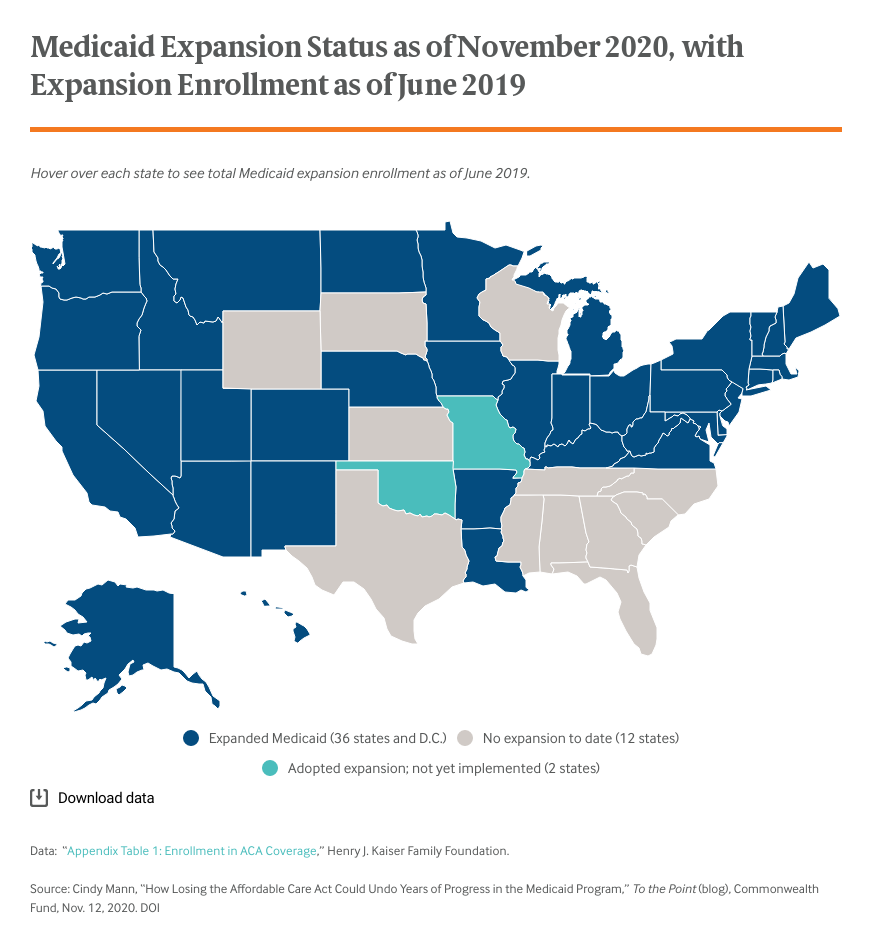 The ACA has changed Medicaid beyond expanding coverage. The changes below, which took effect in expansion and nonexpansion states, could have a profound effect, especially during the current recession:

Destabilizing Markets and Shifting Costs Back to States

The expansion population accounts for about 20 percent of the Medicaid population nationwide. If the ACA ends, many of the health plans serving Medicaid will experience significant destabilization, with delivery system consequences for the nonexpansion population. In addition, some ACA provisions bolstered Medicare and private insurance coverage. Eliminating them could shift costs onto Medicaid. For example, the ACA prohibits annual and lifetime limits for most commercial plans. If those limits are reestablished, people might turn to Medicaid for supplemental coverage — for example, for children with costly medical needs.

A decision striking down the Affordable Care Act could erase 10 years of structural improvements in Medicaid and impose new costs on states. The federal government could work with states to address some of the damage, but without statutory authority, the administration’s hands will be tied in many areas. Most notably, without statutory authority, the only avenue for maintaining the Medicaid expansion is through a federal waiver, but that would not be sufficient to restore the 90 percent federal matching rate under the ACA. Congress could avert the damage, but given the partisan divide, legislation will prove challenging. However, with strong public support for the ACA, if the Supreme Court does strike down the law, Congress will face intense pressure to act.