States Take Action on Health Care Sharing Ministries, But More Could Be Done to Protect Consumers

Health care sharing ministries (HCSMs) are arrangements in which members who follow a common set of religious or ethical beliefs agree to contribute regular payments to help pay the qualifying medical expenses of other members. HCSMs, along with other products that lack the consumer protections of the Affordable Care Act (ACA), have been promoted by the Trump administration and are sometimes viewed as alternatives to ACA coverage. The arrangements may look much like insurance, but they’re not. HCSMs do not promise to reimburse enrollees for qualifying medical expenses and are not required to meet financial standards to ensure they have sufficient funds to pay claims. As such, states usually don’t regulate them as insurers, meaning HCSMs are exempt from all federal and state health insurance consumer protections.

Recent Activity Makes the Case for a Stronger Regulatory Approach

In the past year, state regulators have stepped up their scrutiny of HCSMs to warn consumers of their limits. To date, Colorado, Connecticut, New Hampshire, Texas, and Washington have taken legal action against one HCSM, Aliera, for allegedly engaging in fraudulent activity and deceptive marketing that has left consumers with unpaid bills. Meanwhile, the National Association of Insurance Commissioners and at least 15 states have issued consumer alerts warning of the risks posed by HCSMs. However, given HCSMs’ features that mimic insurance, it’s unlikely disclosures alone will be enough to fully protect consumers who may see them as “essentially the same” as insurance. 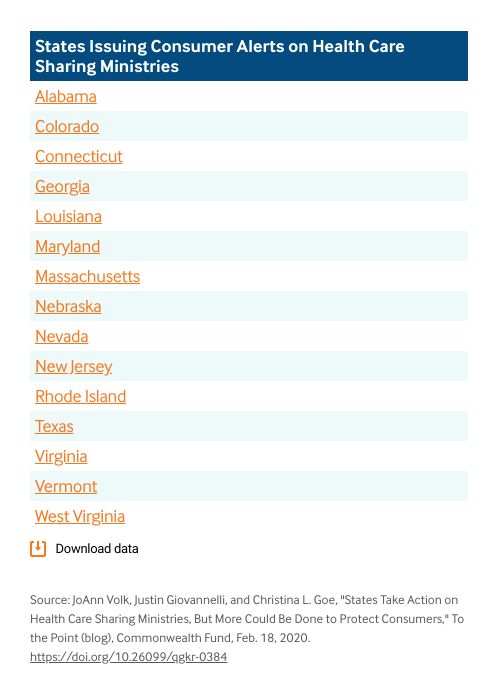 What Can States Do to Protect Consumers?

If states wish to protect consumers from unpaid claims and deceptive marketing, they can do more than issue warnings about HCSMs. At a minimum, regulators in “safe harbor” states that explicitly exempt HCSMs from insurance regulation if the HCSM meets certain standards could require HCSMs to demonstrate compliance with the state’s exemption rules. All states could require greater transparency and address broker-driven sales; some states have taken action in the past year.

Require Data on How HCSMs Operate. At a minimum, states need data on how many people are enrolled in HCSMs and how the entities operate and market their memberships. States could require HCSMs to register, file marketing materials for regulator review of deceptive language, and report whether and how they use insurance brokers. States took similar steps to curb consumer abuses under discount cards, another insurance alternative that raised consumer concerns and were largely unregulated.

Require Financial Information to Assess Risk. Many states with safe-harbor exemptions require HCSMs to provide members with a monthly statement listing the total dollar amount of costs deemed eligible for sharing. Most of those require HCSMs to also publish the amount assigned to other members for payment. However, no state requires HCSMs to report the total amount of claims submitted for payment but denied and none require disclosure of the total dollar amount of claims actually paid. States could require financial information and make it public so that regulators — as well as potential and current enrollees — can assess risk. A bill introduced in Colorado would require HCSMs to report financial information and other data to the insurance department.

Curb Broker-Driven Enrollment. Some states have taken action to curtail broker sales of HCSM memberships. Alaska and Texas issued bulletins reminding brokers of their liability for unpaid claims if they sell unauthorized insurance, a requirement that applies in most states and can dampen broker-driven enrollment growth. In order to address a “surge” in plans selling noncomprehensive coverage, Massachusetts recently tailored its individual mandate exemption for HCSMs. Going forward, Massachusetts residents may enroll in an HCSM that uses brokers or advertises in ways that obscure the difference between HCSMs and insurance, but they will not be exempt from the state’s mandate penalty. After conducting a survey of brokers that found HCSMs are paying substantially higher commissions (15% to 20%) than those paid by marketplace insurers (2.6%), Covered California adopted a requirement for exchange-certified brokers. Those who want to enroll people in HCSMs must first assess whether they are eligible for marketplace subsidies and provide a disclosure of HCSMs’ risks and a comparison to ACA coverage. Brokers also will have to report annually the number of HCSM memberships they sell.

The focus on health care sharing ministries over the past year has brought to light the risks of the regulatory vacuum in which they operate. Consumer complaints and broker reports eventually alerted regulators to Aliera’s deceptive practices, but regulators have additional oversight tools to protect consumers. State regulators need to know which HCSMs are marketing to their residents and how they operate, then proactively evaluate those operations to ensure they are not selling unlicensed insurance. States that have taken action to stabilize their ACA markets — by, for example, limiting or banning short-term plan sales, instituting reinsurance, or adopting a coverage mandate — will see those efforts undermined if HCSMs are able to collect members’ monthly fees until they get sick and need comprehensive coverage.