The Affordable Care Act (ACA) requires that most health insurers and employer health plans cover certain preventive services without cost-sharing, including vaccines recommended by the Advisory Committee on Immunization Practices (ACIP).1 This requirement has been of enormous importance to families given the high cost of fully immunizing children against vaccine-preventable disease, but health insurance alone is not sufficient for the extraordinary demands on the public health system imposed by a crisis like the COVID-19 pandemic.

Regulations issued by the Obama administration limit the ACA requirement to “immunizations for routine use.” This means that immunizations needed for emergencies may not be covered. Additionally, the ACA gave plans and insurers up to two years to cover a vaccine following ACIP recommendation. For these reasons, the Coronavirus Aid, Relief, and Economic Security (CARES) Act added express language requiring that insurers and employer plans add coverage of any ACIP-recommended COVID-19 vaccines within 15 days.

But, as one of us recently observed, it would be a critical mistake to rely on public and private health insurance alone to achieve population-wide immunization. Millions of Americans are uninsured, and millions experience frequent breaks in coverage. The threat of gaps in coverage — even with the ACA — has risen significantly as a result of soaring unemployment that has cost millions not only their wages, but their workplace health benefits. While the majority of people who lose employer benefits will be eligible for Medicaid or ACA marketplace subsidies, the Urban Institute estimates that if the unemployment rate rises to 20 percent, 7 million to 12 million people could be left completely uninsured.

A second reason not to rely on health insurance to achieve population-level immunization has to do with the fine print — that is, the limits on what the ACA preventive services requirement guarantees even for people with insurance. The reforms under the law do not reach health plans not regulated by the ACA, such as the short-term plans promoted by the Trump administration, health care sharing ministry plans, grandfathered health plans, and Farm Bureau plans. Nor does the ACA cover preventive services furnished by out-of-network providers. Further, the ACA does not guarantee preventive benefit coverage for adults eligible for Medicaid under traditional program rules rather than as a result of the ACA Medicaid expansion, such as exceptionally poor parents of minor children, pregnant women, adults with disabilities, and the elderly.

While the CARES Act closes one important vaccine coverage loophole, the House-passed Health and Economic Recovery Omnibus Emergency Solutions (HEROES) Act would go further, removing the coverage gap for working-age adults whose Medicaid eligibility is tied to traditional program rules. HEROES also would require that the ACIP move quickly to recommend whether a new, FDA-approved COVID-19 vaccine merits full coverage as a qualified preventive service. HEROES also would expand the state Medicaid option to cover the uninsured for testing to include coverage for COVID-related treatment and vaccines. In addition, HEROES would bar cost-sharing for uninsured children who are entitled to immunization coverage under Medicaid’s Vaccines for Children program.

But even with these reforms, many types of health plans remain exempt. Furthermore, the HEROES Act is far from becoming law. Even were all states to immediately adopt Medicaid expansion under the act, full implementation could take months, compared to a publicly funded program that can pay for and rapidly distribute the vaccine widely and equitably.

As desirable as insurance coverage for routine immunizations may be, when the scientific breakthrough for a safe and effective COVID-19 vaccine finally arrives, this nation will need an emergency public health response that can operate quickly and efficiently. 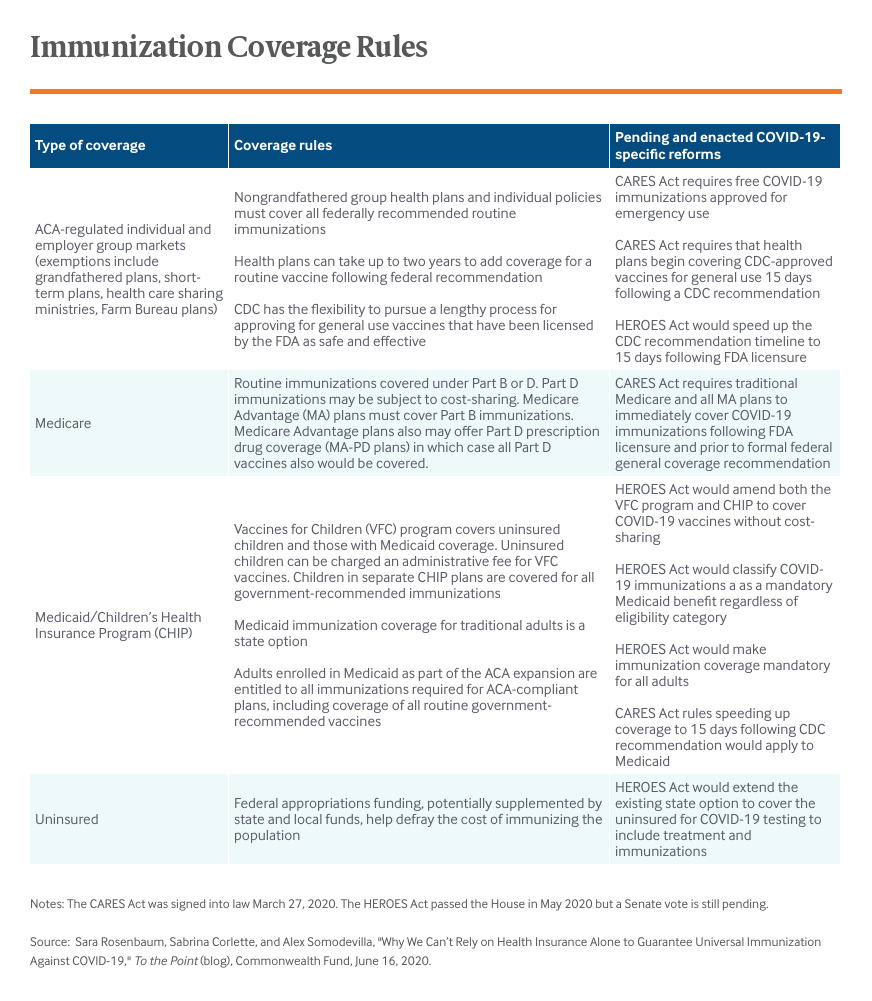 1 This requirement extends to nongrandfathered health plans (those plans that were not in place prior to the ACA) and both insured or self-insured employers (employers who purchase insurance policies for their employees and those that use insurers as plan administrators but pay claims directly on behalf of their employees).