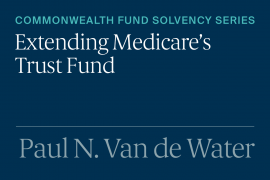 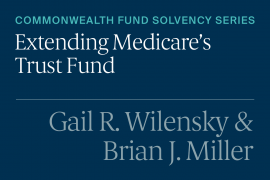 Expanding the Revenue Base

While the overall health of the Medicare Hospital Insurance Trust Fund is generally portrayed as a problem of spending, as most recent reports demonstrate, revenue is also half of the equation. Like its sister Social Security programs, Medicare Part A is financed almost entirely by payroll taxes shared equally between employers and employees. This reflects the historical philosophy that Medicare is an earned benefit supported by lifetime labor force participation. But as the economy and tax codes have evolved, wages and salaries have made up less and less of total incomes as returns on capital investment or other forms of income favored by changes in the tax code make up an increasing proportion. In 1965, when Medicare was enacted, wages and salaries comprised roughly two-thirds of personal incomes; since 2000, as real wages have stagnated for households in the lower half of the income distribution, that number has fallen to about 50 percent.

Medicare financing is based on the notion that economic growth, over time, will offset the growth in the number of eligible persons. But to the extent that economic growth increasingly takes the form of returns on capital that are outside the ambit of payroll taxes, that logic collapses.

The solution is obvious: all personal income, as defined by the Internal Revenue Code, should be subject to Federal Insurance Contribution Act taxes. Doing so, using 2019 figures, would immediately increase Part A trust fund revenues by more than $100 billion a year, and would, at a minimum, ameliorate the problem of trust fund financing for many years to come.

Even if the trust fund were to have all the revenue it needed, it would be still be bad policy for Medicare to spend any more money than necessary. At this juncture, the major locus of Part A overspending involves allocations to Part C Medicare Advantage plans, but that is discussed elsewhere in this blog series.

In Part A proper, the policies most in need of reform involve how Medicare pays for and oversees postacute care services: skilled nursing facilities, inpatient rehabilitation, home care, long-term acute care hospitals, and hospice. Those services account for almost 30 percent of Part A outlays, and the share is increasing as inpatient hospital utilization declines and payments for postacute services, per unit of service, increase more rapidly than hospital payments.

Most legislated reductions in Part A expenditures in recent years have involved reducing payments for inpatient care, and there is growing consensus that these payments have been squeezed about as hard as is reasonable. But there is consensus in much of the policy community that most postacute services are overpaid. That problem traces back to the Balanced Budget Act, which introduced prospective payment systems for each category of postacute provider. Those systems all share a common principle: payment for each patient should be tied to their particular health status and care needs.

However sound in concept, this principle requires that the data on individual patients are accurate, logically related to the costs of caring for them, and clinically meaningful. But those data are reported to Medicare by providers themselves, and only audited sporadically and inadequately. Studies by the Medicare Payment Advisory Committee (MedPAC), the Government Accountability Office, and the Department of Health and Human Services Inspector General have identified systematic overpayment for these services. This is not just a problem of money; the distortions introduced by overpayments and insufficient oversight can negatively impact the quality of care.

In its most recent report, MedPAC recommended reducing or freezing postacute care payment levels. Doing so would generate savings exceeding $10 billion over the next five years, with the savings growing after that. More systematic reform, not only of payment methods but of regulatory requirements and structures, is also urgently needed.

As with any household that is spending more than it is taking in, Medicare needs to raise more revenue while reducing expenditures. While measures to do the latter are easily described, they are hard to implement and likely to engender opposition. Increasing trust fund revenues is conceptually and operationally simpler, but treads on new territory: subjecting nonsalaried income to payroll taxes. This would be a significant change in how our nation funds its major social insurance programs. Failing to do so will only exacerbate the growing crisis of economic inequality and endanger the long-term health of the social insurance programs on which all Americans rely, now and in the future.