The Medicare Hospital Insurance (HI) Trust Fund, which pays for Medicare beneficiaries’ hospital bills and other services, is projected to become insolvent in 2024 — less than three years away. While the HI trust fund has long faced a likely shortfall, this is only the second time in its existence that insolvency has been predicted within five years. Without changes to expected spending or trust fund revenue, the trust fund will not have sufficient funds to cover the entire cost of beneficiaries’ health care. The HI trust fund is primarily funded through payroll taxes paid by employers and employees, with some additional income from interest as well as premiums paid by voluntary enrollees not automatically entitled to Medicare Part A. Will the trust fund solvency be adequately extended by reducing the projected growth in expenditures, raising revenues, changes to the services covered by Medicare Part A, or a combination of these options? 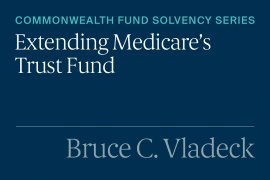 There are bipartisan Medicare payment proposals that would reduce Medicare payments included in previous Obama and Trump budgets that could go a long way to filling the budget shortfall. While previous policy proposals either proposed new revenue sources or payment reductions, recent policies are pragmatic in nature and attempt to modify either beneficiary or provider behavior. For example, site-neutral payments, in which Medicare pays the same amount for the same service irrespective of the site where it is performed, may drive providers to choose more cost-effective settings (e.g., knee arthroscopy moving from a hospital outpatient setting to an ambulatory surgery center). Additionally, reforming graduate medical payments could control expenditures and tie payments to performance metrics. If these changes were adopted, they would produce almost half of the needed $500 billion in savings over the next decade and put less pressure on additional policy changes we suggest for producing the remaining savings. However, the recommended policy changes also could be structured to produce the full amount of savings.

We recommend converting Medicare to a premium-support structure, providing beneficiaries with a clear choice among risk-adjusted, capitated plan products (i.e., managed care). This would help transition Medicare to value-based care and could slow the rate of growth in spending by adjusting premium subsidy, capitation rates, or the risk-adjustment methodology. Traditional Medicare, by contrast, is currently an open-ended entitlement program, where spending reflects the effect of various payment provisions to providers and the demand for services from beneficiaries.

The programs that are most similar to a premium-support model are the Federal Employees Health Benefit Plan (FEHBP) or the Affordable Care Act marketplaces. In the FEHBP, the federal government pays approximately 72 percent of the premium of the four most popular programs chosen by federal employees and retirees in the previous year. The program has been remarkably stable over time with few legislative or regulatory changes, with participating plans negotiating their benefit offerings and premiums each year with the Office of Personnel Management. Generally regarded as a successful and competitive marketplace, federal employees can choose among a large number of FEHBP plans.

A premium-support model may specify the minimum benefits that need to be included in any plan offering or could only include an actuarially predetermined dollar amount of benefits. Medicare Part D is the closest example of a premium-support model currently in use in the program. We assume that traditional Medicare benefits would continue to be a requirement of any plan that participated.

Two of the most important features of converting Medicare to a premium-support system is how and where to set the average government contribution toward the purchase of a plan and whether individuals already on Medicare will be grandfathered into the traditional Medicare program. In its analyses of differences in the outcomes of converting Medicare into a premium-support program, CBO assumed that the federal government would divide the nation into regions and competing private plans would submit bids for the amount they would accept for providing Medicare benefits to a senior with average health. The Medicare fee-for-service (FFS) benefit also would be one of the plans offered to seniors. Its bid would be based on the projected FFS Medicare cost for a senior of average health. As is currently the case, adjustments would be made for seniors with different health statuses.

Politically, the most feasible combination of choices would be to set the regional benchmark at the average bid received for each region and transition all individuals currently on Medicare into the new programmatic structure if they so desired. This also would allow anyone older than age 65 to choose either to be a part of the new program or continue with the Medicare program they had been using. The combination that would make the conversion the least costly is to use the second-lowest bid in each region for a senior in average health and not to grandfather in individuals already on Medicare. This is similar to the model used in the Affordable Care Act marketplaces, which sets a subsidy to the second-lowest bid for silver plans.

In its estimates, CBO found that the budgetary decision on grandfathering overwhelms the estimated savings relative to whether the second-lowest bid or the average bid is used.

The estimated savings with the second-lowest bid and without using grandfathering between 2022 and 2026 is almost as much in savings if the period were extended through 2030 — $419 billion versus only $50 billion of savings with grandfathering. It should be possible, though, to grandfather seniors who represent the “very elderly” (i.e., older than 80). The age cutoff that would produce a specified amount of savings at various age levels would have to be actuarially determined. The difference between using the second-lowest bid and the average bid is also significant ($419 billion versus $184 billion over five years), suggesting there may be an option between the second-lowest bid and the average bid that when combined with exempting the very elderly would produce savings of $500 billion across the decade.

These savings estimates suggest a policy that exempts the oldest populations on Medicare and utilizes a bid between the second-lowest and the average could still produce significant savings. It would offer seniors a choice of health plans, including traditional Medicare. It would fundamentally change the incentives associated with traditional Medicare and makes it more like Part D, which continues to have costs below initial projections while remaining popular with seniors.