The Affordable Care Act has survived another Supreme Court challenge. We can expect continued efforts to build and improve upon the law, including through a public option.

President Biden endorsed a federal public option during his campaign and has since called on Congress to act, although the White House has not released a detailed proposal. Several Democrats have introduced public option legislation; two congressional committees are currently seeking public input on a path forward.

What Is a Public Option?

Although definitions vary, the phrase “public option” broadly refers to a health plan created by the government to offer consumers a high-value, affordable alternative to fully private plans. Traditionally, “public option” has referred to publicly funded plans that may or may not rely on private entities to provide some administrative functions. More recently, however, the phrase has been applied to privately funded plans established pursuant to a state law and subject to certain heightened requirements meant to improve value and advance state goals, like cost containment. The Washington, Nevada, and Colorado laws generally fall into this latter category.

States Taking the Lead: Working with Private Carriers to Expand and Improve Coverage

All three states have already leveraged the Affordable Care Act: they operate their own marketplaces, took actions to promote access to adequate insurance, and expanded Medicaid. Nonetheless, access and affordability remain challenging, especially for rural residents, undocumented immigrants barred from accessing marketplace coverage, and people caught in the family glitch who are ineligible for premium tax credits. To address these challenges, the three states took broadly similar approaches in their public option laws:

During implementation of its public option–style law, Washington faced the challenge of persuading carriers and providers to participate while trying to constrain premiums. All three states have learned from Washington’s early experience and adopted different incentives and requirements to reconcile these competing interests.

To bring in providers, Nevada will require any provider participating in its Medicaid program or other state plans to enroll in at least one public option plan network. Colorado will require providers to participate only if a public hearing shows that carriers cannot meet premium reduction or network adequacy requirements. If this happens, the state can set reimbursement rates on providers and fine or suspend hospitals that refuse to accept the set rates.

All three states also included reimbursement floors tied to Medicare rates for some or all providers to mitigate hospital and physician stakeholders’ concerns.

Even the most ambitious states can face barriers when adopting reforms such as public options. These barriers — which may be financial, political, or logistical — suggest that federal action may be necessary for more aggressive cost containment and coverage gains. 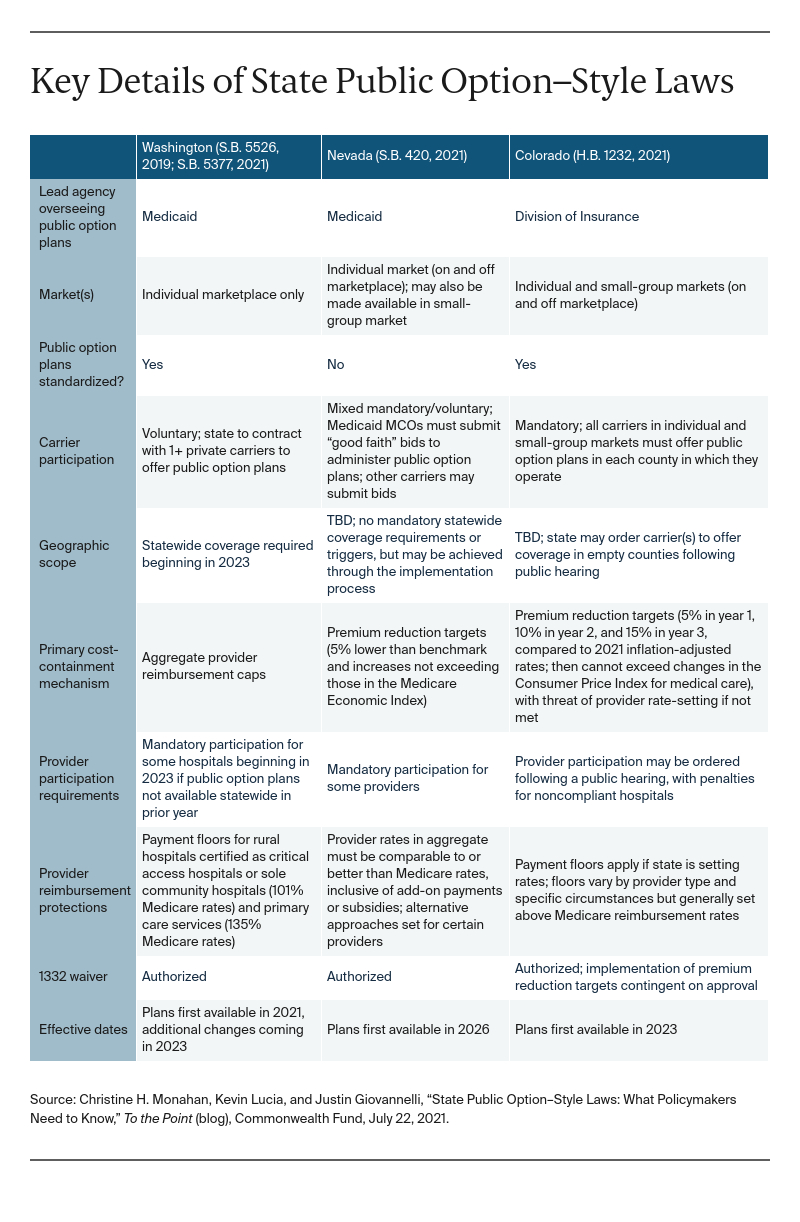