Who Are the Remaining Uninsured, and Why Do They Lack Coverage?

While the Affordable Care Act expanded health insurance to millions of Americans, an estimated 30.4 million people were uninsured in 2018. Concern about the cost of insurance is a key reason why many are uninsured.

The Affordable Care Act (ACA) brought sweeping change to the U.S. health care system, expanding comprehensive health insurance to millions of Americans and making it possible for anyone with health problems to get coverage by banning insurers from denying coverage or charging more because of preexisting conditions. In 2018 there were 18.2 million fewer uninsured people in the U.S. than when the ACA became law.1 In addition, fewer people are forgoing health care because of cost or reporting high out-of-pocket costs relative to their income.2

Yet, in 2018, an estimated 30.4 million people were uninsured, up from a low of 28.6 million in 2016. Coverage gains have stalled in most states and have even eroded in some.3 In addition, more people have reported problems getting health care because of cost.

To examine why so many people remain uninsured, we use data from the 2018 Commonwealth Fund Biennial Health Insurance Survey. Answers to the survey questions can help federal and state policymakers find solutions to help uninsured Americans gain coverage. 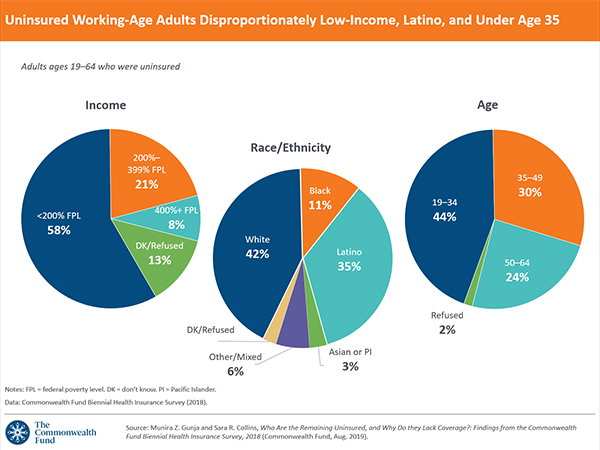 The ACA’s coverage expansions led to significant declines in uninsured rates among people who had been the most likely to be uninsured: people with low incomes, Latinos, and young adults (Table 1). But in 2018, these groups remained disproportionately uninsured. 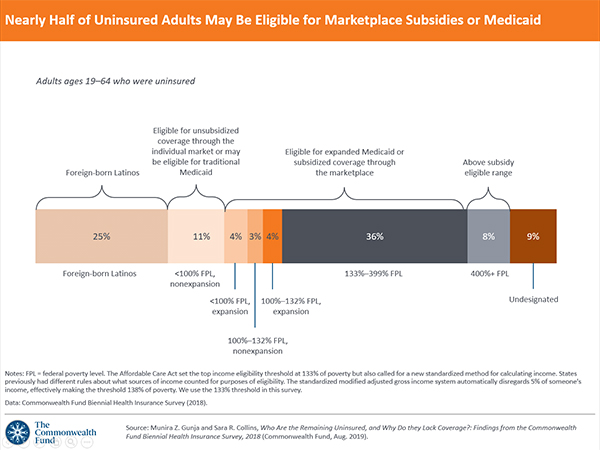 We examined the remaining uninsured by income status to determine whether they might be eligible for subsidized coverage. The ACA provides subsidized insurance through two sources: Medicaid for adults who earn less than 138 percent of poverty ($16,643 for an individual or $33,948 for a family of four) in states that expanded Medicaid, and subsidized plans in the ACA marketplaces for those who earn up to 400 percent of poverty ($48,240 for an individual and $98,400 for a family of four).

The ACA excludes undocumented immigrants from both the marketplace subsidies and the Medicaid expansion: they may only buy coverage through the individual market outside the marketplaces. We use foreign-born status among Latinos as a rough proxy for uninsured adults who may not be eligible for subsidized coverage because of their immigration status.4 We do not have an estimate of undocumented immigrants of other ethnicities.

Nearly half (47%) of uninsured adults in 2018 had incomes that may make them eligible for either expanded Medicaid or subsidized marketplace plans. The remainder of uninsured adults would not qualify for either: 11 percent earn below 100 percent of poverty and live in a state that did not expand Medicaid;5 8 percent have incomes at or above 400 percent of poverty and are ineligible for the tax credits; and 25 percent were foreign-born Latinos and may be ineligible for Medicaid or subsidized plans because of their immigration status. 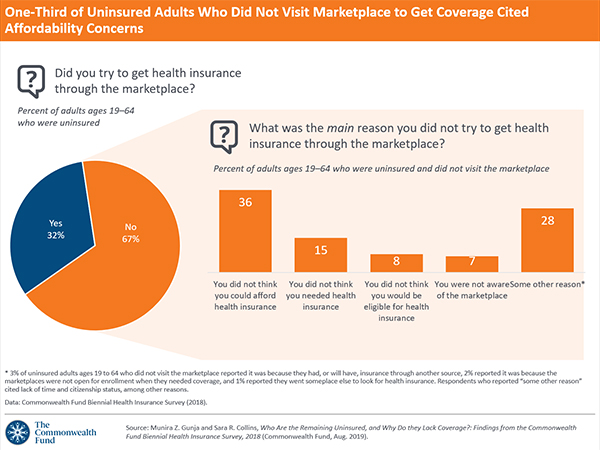 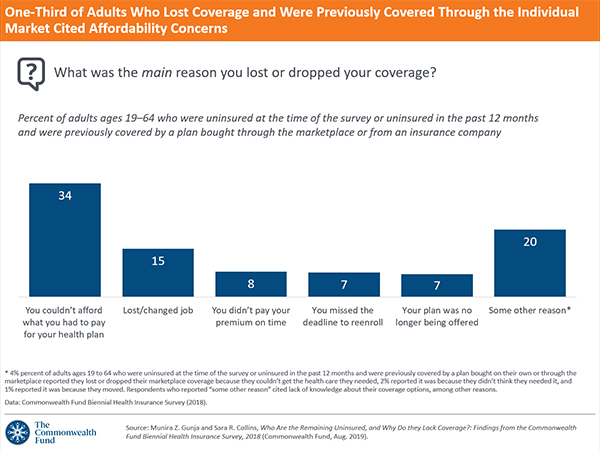 Affordability is the top reason adults dropped their individual market coverage. One-third (34%) of adults who were either uninsured at the time of the survey or had a gap in coverage in the past 12 months, and who were previously covered by either a plan they bought through the marketplace or directly from an insurance company, reported they lost or dropped their plan because they could not afford it.7 Half of these adults were uninsured, about a quarter had reenrolled into the individual market, 12 percent transitioned into Medicaid, 7 percent enrolled in employer insurance, and 5 percent enrolled into Medicare (data not shown). 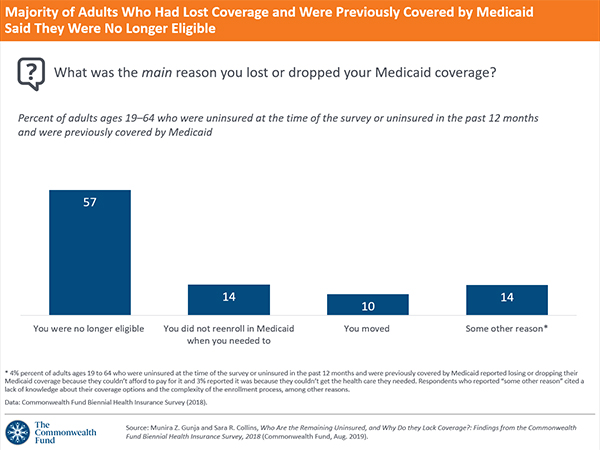 More than half (57%) of adults who were either uninsured at the time of the survey or had a gap in insurance coverage in the past 12 months and who were previously covered by Medicaid reported they lost their Medicaid coverage because they were no longer eligible. Fourteen percent said they did not reenroll in time and 10 percent had moved.8 After losing Medicaid, about half of these adults remained uninsured, nearly one-third reenrolled in Medicaid, 14 percent enrolled in employer coverage, 3 percent gained individual market coverage, and 3 percent gained Medicare (data not shown). 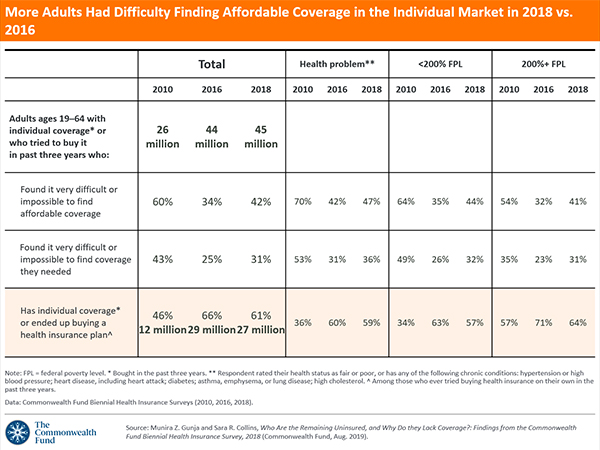 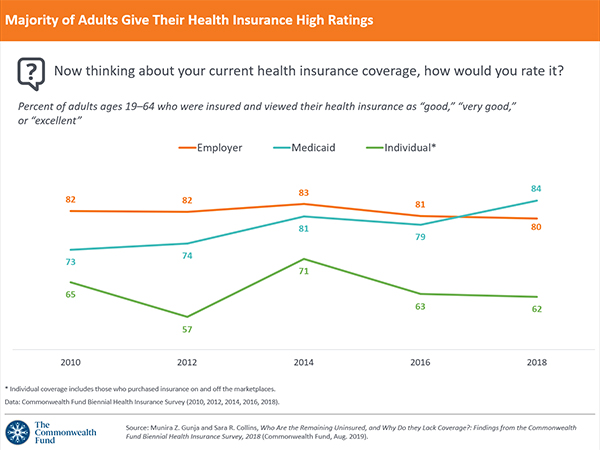 Affordability remains a key reason 30 million adults remain uninsured. Our findings show more than a third of uninsured adults who did not try to get coverage through the marketplaces cited affordability concerns. One-third of adults with a coverage gap who were previously insured through the individual market dropped their plans because they could not afford them. The survey also suggests a lack of knowledge among uninsured adults about their coverage options. While the national debate about health care is focused on more sweeping reforms, such as Medicare for All, federal and state policymakers have several options to help millions of people keep or gain coverage within the existing law.

The Commonwealth Fund Biennial Health Insurance Survey, 2018, was conducted by SSRS from June 27 to November 11, 2018. The survey consisted of telephone interviews in English and Spanish and was conducted among a random, nationally representative sample of 4,225 adults ages 19 to 64 living in the continental United States. A combination of landline and cellular phone random-digit-dial (RDD) samples was used to reach people. In all, 725 interviews were conducted with respondents on landline telephones and 3,500 interviews were conducted on cellular phones.

The sample was designed to generalize to the U.S. adult population and to allow separate analyses of responses of low-income households. Statistical results are weighted to correct for the stratified sample design, the overlapping landline and cellular phone sample frames, and disproportionate nonresponse that might bias results. The data are weighted to the U.S. adult population by age, sex, race/ethnicity, education, household size, geographic region, population density, and household telephone use, using the U.S. Census Bureau’s 2017 Annual Social and Economic Supplement.

The resulting weighted sample is representative of the approximately 193.9 million U.S. adults ages 19 to 64. The survey has an overall margin of sampling error of +/– 1.9 percentage points at the 95 percent confidence level. The RDD landline portion of the survey achieved a 8.4 percent response rate and the RDD cellular phone component achieved a 5.2 percent response rate.

5. These adults would only be eligible for their state’s existing Medicaid program, which is usually only available to children and very poor parents, or unsubsidized plans in the marketplaces.

6. Three percent of uninsured adults ages 19 to 64 who did not visit the marketplace reported it was because they had, or will have, insurance through another source, 2% reported it was because the marketplaces were not open for enrollment when they needed coverage, and 1% reported they went someplace else to look for health insurance. Respondents who reported “some other reason” cited lack of time and citizenship status, among other reasons.

7. Four percent of adults ages 19 to 64 who were uninsured at the time of the survey or uninsured in the past 12 months and were previously covered by a plan bought on their own or through the marketplace reported they lost or dropped their marketplace coverage because they couldn’t get the health care they needed, 2% reported it was because they didn’t think they needed it, and 1% reported it was because they moved. Respondents who reported “some other reason” cited lack of knowledge about their coverage options, among other reasons.

8. Four percent of adults ages 19 to 64 who were uninsured at the time of the survey or uninsured in the past 12 months and were previously covered by Medicaid reported losing or dropping their Medicaid coverage because they couldn’t afford to pay for it and 3% reported it was because they couldn’t get the health care they needed. Respondents who reported “some other reason” cited a lack of knowledge about their coverage options and the complexity of the enrollment process, among other reasons.

9. Estimate includes three states (Idaho, Nebraska, Utah) that passed ballot initiatives in 2018 to expand Medicaid but have not yet done so. See Commonwealth Fund, “Status of Medicaid Expansion and Work Requirement Waivers,” interactive map, updated July 31, 2019; Rachel Garfield, Kendal Orgera, and Anthony Damico, The Coverage Gap: Uninsured Poor Adults in States that Do Not Expand Medicaid (Henry J. Kaiser Family Foundation, June 2018 and May 2019); and Matthew Buettgens, The Implications of Medicaid Expansion in the Remaining States (Urban Institute, May 2018).

16. Sara R. Collins, “Consumers Shopping for Health Plans Are Left in the Dark by Trump Administration,” To the Point (blog), Commonwealth Fund, July 19, 2018.

18. Collins and Tikkanen, “Many Varieties of Universal Coverage,” 2019.

20. Collins and Tikkanen, “Many Varieties of Universal Coverage,” 2019.

24. Sara R. Collins, Sherry A. Glied, and Adlan Jackson, The Potential Implications of Work Requirements for the Insurance Coverage of Medicaid Beneficiaries: The Case of Kentucky (Commonwealth Fund, Oct. 2018).

Munira Z. Gunja and Sara R. Collins, Who Are the Remaining Uninsured, and Why Do They Lack Coverage? Findings from the Commonwealth Fund Biennial Health Insurance Survey, 2018 (Commonwealth Fund, Aug. 2019). https://doi.org/10.26099/h0xy-az24