Lello Tesema holds her one-year-old daughter Semaye Mussie as Asia Hartford, L.V.N., of the County of Los Angeles Department of Public Health gives her a vaccine on Wednesday, June 22, 2022. Federal pandemic-related health insurance protections have helped millions of Americans get and afford health coverage, but that may be in jeopardy. Photo: Keith Birmingham/MediaNews Group/Pasadena Star-News via Getty Images

Recent federal data underscore how federal pandemic-related health insurance protections have helped millions of Americans get and afford health coverage. The Centers for Medicare and Medicaid Services (CMS) reported that 17 million more adults and children were enrolled in Medicaid and the Children’s Health Insurance Program (CHIP) in March 2022 than in February 2020, bringing the total number of people enrolled to 87.9 million. New estimates from the Congressional Budget Office (CBO) show increases in 2021 and 2022 Medicaid and marketplace enrollment and declines in the number of uninsured people in the U.S. What explains these gains and how can Congress protect them?

Why Has Medicaid Enrollment Grown?

The Families First Coronavirus Response Act (FFCRA) of 2020 required states to keep people continuously enrolled in Medicaid in exchange for enhanced federal matching funds through the end of the COVID-19 public health emergency (PHE). The CBO estimates that this provision has increased Medicaid enrollment by 12.9 million people. 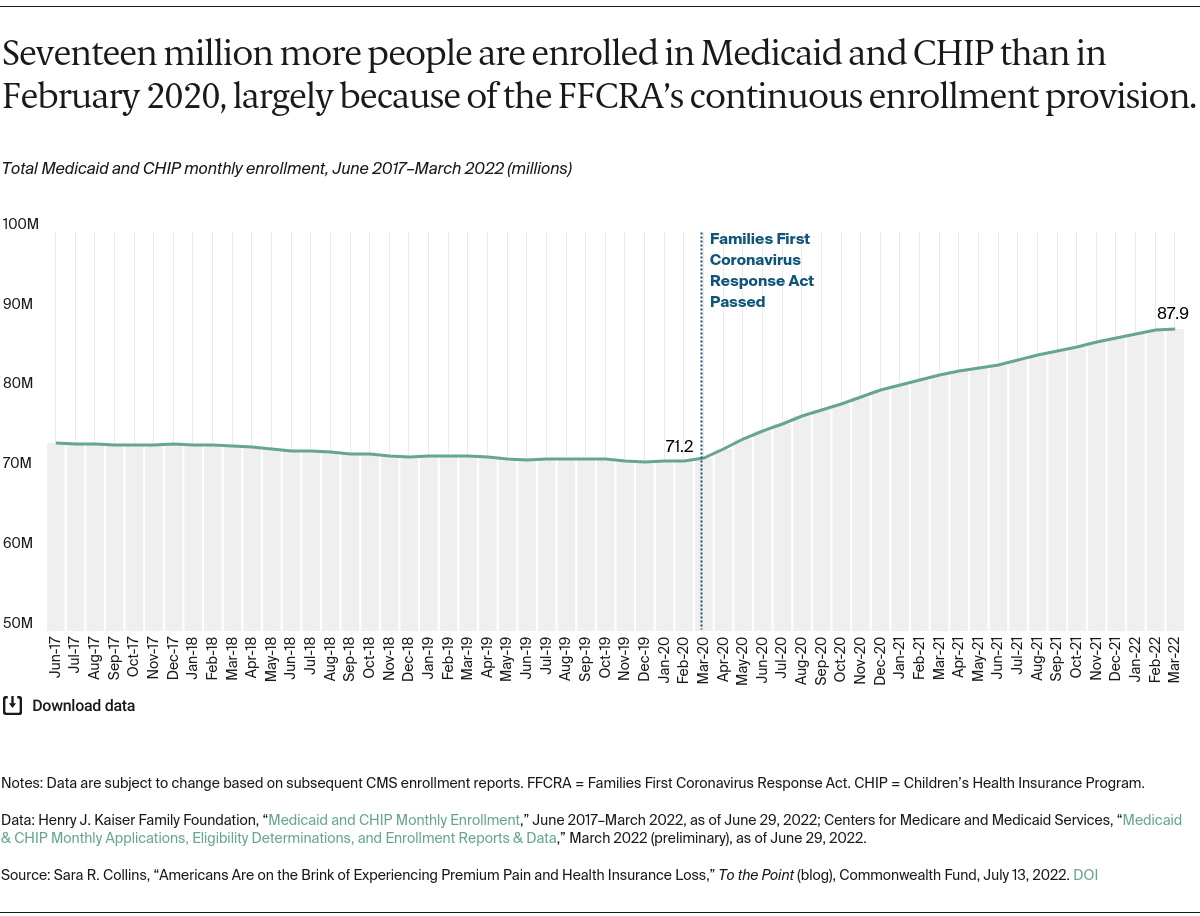 Why did this requirement drive enrollment so much higher than in prior years?

Put simply, prior to FFCRA, existing state and federal policy make it hard for eligible people to stay enrolled in Medicaid. People become eligible for Medicaid because of their income or need for health care services, like being pregnant or having a disability. Under federal law, states must verify that Medicaid enrollees remain eligible for coverage at least once a year, but many states check eligibility more frequently. Some states allow as little as 10 days for enrollees to submit documents to prove eligibility. Even small income bumps, such as from seasonal work, can lead to disenrollment, though income might drop again in a few months. Consequently, the average length of enrollment in Medicaid is less than 10 months.One study found that over a two-year period, one-third of nondisabled, nonelderly adult Medicaid enrollees became disenrolled; of those, three-quarters became uninsured for part or all of the remaining time period. Other studies have found that more than half (55%) of pregnant women1 enrolled in Medicaid at the time of their delivery reported a gap in health insurance within six months.

Gaps in coverage have consequences for people’s health care and financial security. The 2020 Commonwealth Fund Biennial Health Insurance Survey found that more than half of adults who were insured at the time of the survey but had a gap in coverage in the past year, reported skipping care or not filling prescriptions, or had problems paying medical bills.

Why Has Marketplace Enrollment Grown?

The American Rescue Plan Act (ARPA) lowered premiums for marketplace plans. In Commonwealth Fund surveys, the primary reason people give for either not enrolling in marketplace plans or dropping coverage is because the premiums are too expensive. The ARPA addressed this barrier by substantially lowering premiums through larger subsidies, leading to average per person per month savings of $67. CBO estimates the ARPA enhanced subsidies increased 2022 marketplace enrollment by 2.3 million people.

The bad news is that these coverage and premium protections will expire within months. Without congressional intervention, the ARPA subsidies will expire at the end of 2022. The continuous enrollment requirement will end when the PHE designation ends, anticipated in 2023, triggering a massive eligibility redetermination effort by states for all people enrolled in Medicaid. Evaporation of these pandemic policies led CBO to forecast that over the next 10 years: 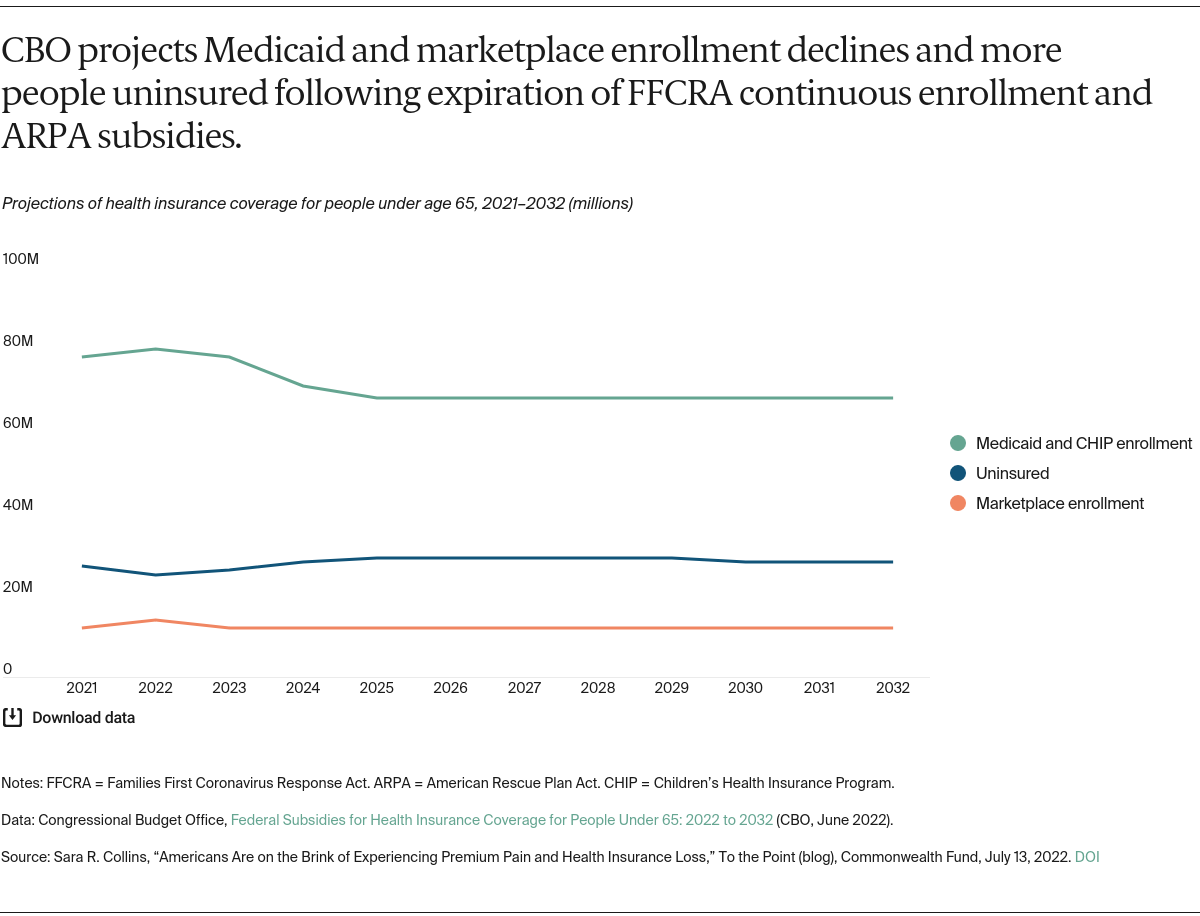 That’s not all: According to the Urban Institute, the combination of subsidy loss and a less-healthy risk pool as people exit the marketplaces will contribute to annual premium hikes for people still enrolled, amounting to:

The increases for the lowest-income individuals could make it less likely that people who lose Medicaid eligibility at the end of the PHE will enroll in marketplace plans. Those with higher incomes are also hit hard. Cynthia Cox of the Kaiser Family Foundation estimates that in West Virginia, a 40-year-old adult earning just over the subsidy eligibility threshold in 2022 ($51,521) could see premiums rise from 8.5 percent of income to 18 percent; a 64-year-old would see premiums shoot up from 8.5 percent of income to a whopping 41 percent.

What Can Congress Do to Prevent Premium Pain and Coverage Loss?

Expanding coverage and then retracting it is a typical response to public health crises in the United States. But it leaves the country unprepared for inevitable future disruptions to our health care system.

The author thanks Relebohile Masitha, Lauren A. Haynes, Rachel Nuzum, and Akeiisa Coleman for research assistance and helpful comments.