An elderly couple walks through the municipality of Torrelaguna in Madrid, Spain, on July 13, 2022. Among the countries belonging to the Organisation for Economic Co-operation and Development (OECD), life expectancy in 2019 was highest in Japan, Spain, and Switzerland. Photo: Rafael Bastante/Europa Press via Getty Images

Despite spending more on health care than any other nation, the United States has a lower average life expectancy and higher avoidable mortality — deaths that could have been prevented with appropriate health care — than other middle- and high-income countries. In this post, we compare individual states and the District of Columbia to peer countries on these two health system measures. We find that regardless of where they live, Americans are more likely to die earlier than people in many other countries. And they’re more likely to die from factors that could have been prevented with the right care provided at the right time.

Policymakers use life expectancy to gain a better understanding of the overall health of their country. Among all countries that are members of the Organisation for Economic Co-operation and Development (OECD), life expectancy in 2019 was highest in Japan (84.4 years), Spain (84.0), and Switzerland (84.0). Average life expectancy for a newborn in the U.S. was 78.8 years, well below neighboring Canada (82.3 years) and nearly all other high-income countries. These rates don’t reflect the impact of COVID-19, which has significantly reduced life expectancy in the U.S. and other countries. 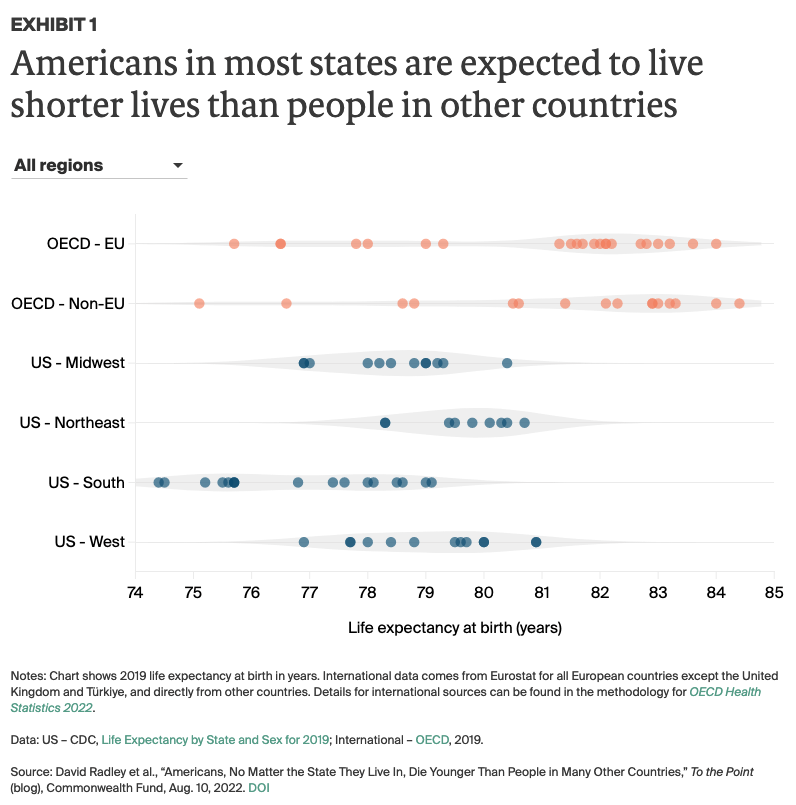 Within the U.S., life expectancy varies dramatically depending on where you live. In 2019, residents of nine states (California, Colorado, Connecticut, Hawaii, Massachusetts, Minnesota, New Jersey, New York, and Washington) had an average life expectancy between 80 and 81 years. But even in these states, people can expect to live shorter lives, on average, than those living in most OECD countries. Life expectancy in most U.S. states varies between 75 and 80 years. But in West Virginia and Mississippi, it is less than 75 years — below Mexico, the OECD country with the lowest life expectancy.

Life expectancy is driven by many factors, including socioeconomic circumstances and influences outside countries’ public health and care delivery systems. Still, policy choices related to health care access as well as how care is delivered matter, and they affect people’s health. We can evaluate this impact by counting premature deaths from causes related to public health and health care interventions.

The OECD reports such a measure, which it calls avoidable mortality, defined as deaths before age 75 from conditions that are either preventable through effective public health and primary prevention (before the onset of disease) or treatable when they’re detected early and effective care management is provided. Examples include deaths from diabetes, certain infections, breast and colon cancer, appendicitis, and renal failure. We applied the OECD’s definition to vital statistics data from the Centers for Disease Control and Prevention, counting premature avoidable deaths in all 50 states and the District of Columbia. To make international comparisons, we weighted each state’s age distribution against the 2015 OECD standard population. U.S. data include deaths that occurred in 2018 and 2019, prior to the emergence of COVID-19. 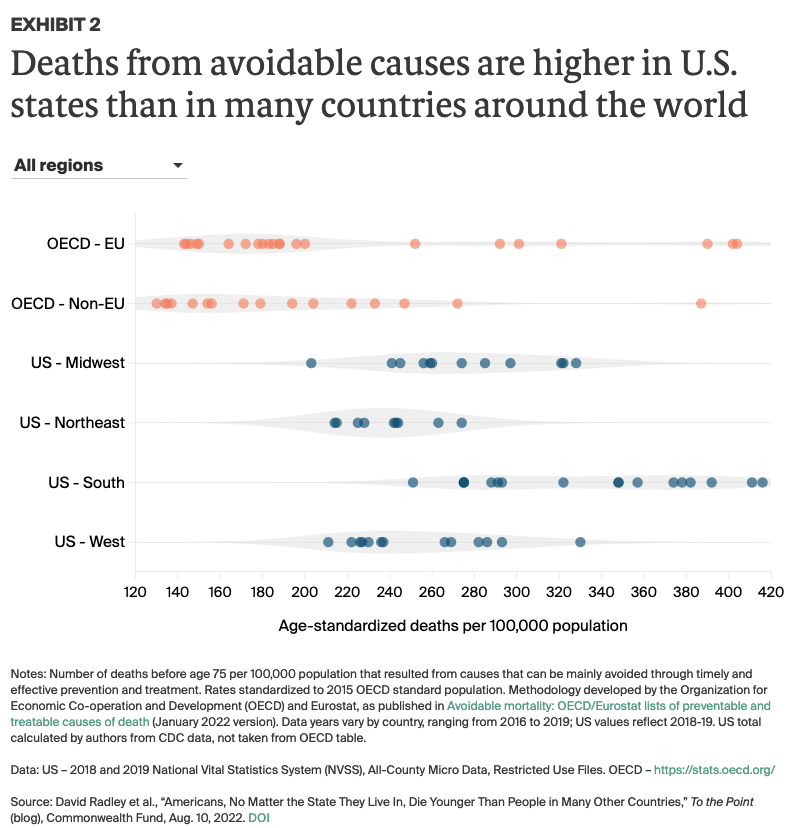 Mississippi and West Virginia stand out: the two states have more than 400 deaths per 100,000 people. That is not only higher than any other state, it also is higher than all other OECD countries, including Mexico, Lithuania, Latvia, and Hungary.

The U.S. experience is disappointing, but not surprising. Higher mortality, and significant state-by-state variation in mortality, reflects a level of fragmentation in health coverage and care delivery that simply does not exist in many other parts of the world. As detailed in the Commonwealth Fund’s Mirror, Mirror, 2021 international comparison, many of U.S. peer countries offer:

Geographic comparisons of health systems allow the public, policymakers, and health care leaders to see the kind of results that are possible from alternative ways of organizing health care coverage and delivery. We have compared two important mortality outcomes in U.S. states to those in other middle- and high-income countries — most of which guarantee health care access through various universal coverage systems. Opportunities abound in the U.S., both at the federal and state level, to adopt similar policies.