People cross the street in Davis Square in Somerville, Mass., on Oct. 15, 2020. Massachusetts is the only state that requires health care sharing ministries (HCSMs) to submit data on enrollment, membership fees, and financial and administrative information. The data offer a glimpse into how HCSMs work. Photo by Erin Clark/Boston Globe via Getty Images

Federal premium assistance for people who obtain health insurance through the Affordable Care Act (ACA) marketplaces is more broadly available and generous than ever before and enrollment in marketplace plans recently reached an all-time high. Even so, health coverage products that don’t adhere to the ACA’s consumer protections continue to be marketed widely, often as a direct alternative to comprehensive coverage. These coverage options are either lightly regulated or completely unregulated, and include products like short-term plans and health care sharing ministries (HCSMs). This blog post focuses on the latter. Though indications suggest growing or significant enrollment in HCSMs in some states, there is a dearth of data on their operations and finances. Now a Massachusetts rule governing HCSMs has offered a glimpse behind the curtain.

HCSMs are arrangements in which members who pledge to follow a common set of religious or ethical beliefs agree to make monthly payments to help pay the qualifying medical expenses of other members. Even though they may be viewed as an alternative to marketplace plans because they have features that closely resemble insurance and may have lower upfront costs than unsubsidized marketplace plans, they don’t follow the same rules or provide any of the protections that insurance plans do (see table). Unlike traditional insurance, these entities make no promise that enrollees will be reimbursed at all, even for health care claims that meet guidelines for payment. Indeed, from a legal standpoint, this “no guarantees” model is a defining feature of HCSMs and one they argue exempts them from insurance regulations. This distinction is sometimes obscured in marketing. One entity marketing itself as an HCSM has filed for bankruptcy and left members with unpaid bills. Another has left members waiting a year for payment for health care bills. 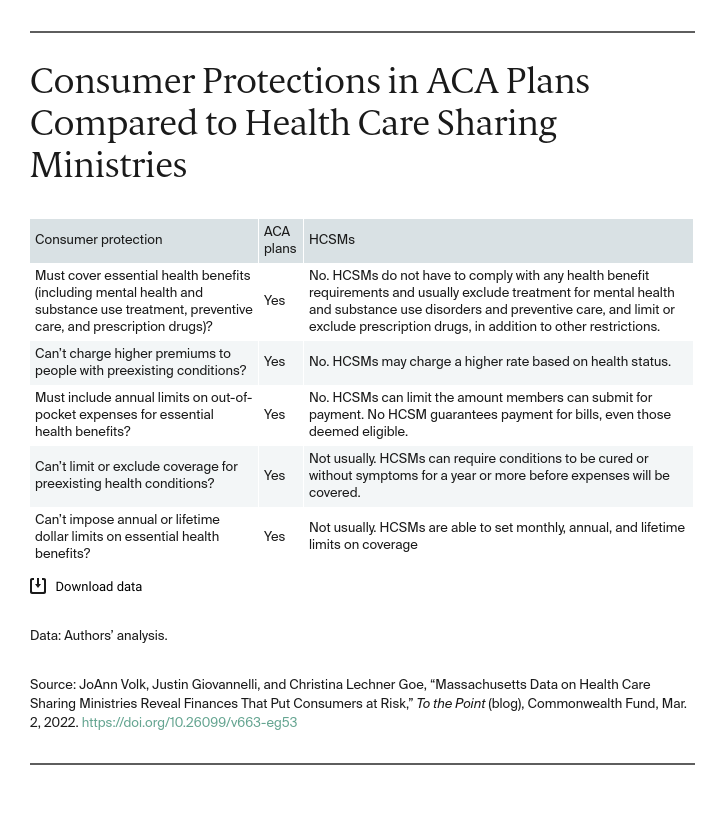 In a First, Massachusetts Requires HCSMs to Report Data

Despite reports of growing HCSM enrollment and consumer confusion, states themselves lack data on HCSMs doing business within their borders. While a few states have pursued informal and nonpublic requests to HCSMs for information, only Massachusetts has rules requiring regular data submissions. Massachusetts requires residents to have health coverage or pay a tax penalty. For someone enrolled in an HCSM to avoid a penalty, the HCSM must meet certain standards and report annually on key elements, including: enrollment, membership fees, financial information, use of third-party vendors, penalties charged to members for their failure to adhere to certain behaviors or because of preexisting conditions, provider contracting, and administrative fees. Earlier this year, the state published these data in a report.

What the Data Show

The financial data reported by Massachusetts HCSMs are concerning, particularly for anyone who relies on these arrangements to pay their health care claims. Perhaps because HCSMs include significant coverage exclusions, the data show only about half of all claims submitted by members were deemed eligible for payment. HCSMs retain authority to determine what is eligible, regardless of what membership guidelines specify, and members have no recourse to appeal these decisions to an independent reviewer, as required of health plans under federal law.

The data also show that claims paid by HCSMs as a percentage of what members pay in monthly contributions — comparable to a medical loss ratio — ranged from 16 percent to 70 percent in 2019 and from 28 percent to 111 percent in 2020. To put those numbers in context, the ACA requires all plans sold to individuals to pay at least 80 percent of premiums toward health care costs. Massachusetts sets the bar higher for insurers: 88 percent of premiums collected must go to health care costs.

HCSMs are not required to meet financial standards to ensure they have sufficient funds to pay members’ claims and they didn’t submit data to Massachusetts in a uniform way, which may explain the significant variation in financial data from year to year and from one HCSM to another. Elsewhere, the limited information that is publicly obtainable is unclear and of limited value for any consumer evaluating coverage options.

Every HCSM that provided data to Massachusetts reported that it operates in all or nearly all other states too, and there are indications that take-up in some places is high. Conservative estimates conclude that HCSM enrollment in Wyoming has grown to nearly a quarter the size of the state’s ACA-compliant individual market. In Idaho, the HCSM market is more than one-third the size of its ACA-compliant counterpart, while in Alaska, it’s more than half.

The Massachusetts data expose the financial risk for consumers who opt for an HCSM rather than enrolling in an ACA-regulated plan. If states wish to protect consumers from potentially misleading and inadequate coverage, they should collect, analyze, and make public these same data to understand how HCSMs are impacting their markets and consumers. The data also can inform regulation and oversight of these arrangements, particularly how they’re marketed and their history of paying claims.