Medical assistant Jennifer Oman organizing the records of patients at the nurse station in Rocky Mountain Cancer Centers in Aurora, Colo., on Thursday, March 17, 2022. In 2020, U.S. hospitals received only 88 cents for every dollar spent caring for Medicaid patients — a $24.8 billion underpayment that has implications for how patients access and experience care. Photo: Hyoung Chang/MediaNews Group/Denver Post via Getty Images

Medicaid is the largest public health insurance provider in the United States. As such, Medicaid policy has significant implications for the health of people with low incomes. One issue affecting access to care is Medicaid’s notably low reimbursement rates: health providers and institutions often spend more money caring for Medicaid beneficiaries than they receive in reimbursement. For example, in 2020 hospitals received only 88 cents for every dollar spent caring for Medicaid patients. This amounted to a $24.8 billion underpayment. Low reimbursement rates limit access to quality care and contribute to poor health outcomes for Medicaid beneficiaries, who are disproportionately people of color. Research suggests that increasing Medicaid primary care rates by $45 per service would reduce access-to-care inequities by at least 70 percent.

Using the Racial Equity and Policy (REAP) framework, a tool for assessing how structural racism is embedded in policy processes, this blog post outlines specific dimensions of the policy environment and broader key considerations around Medicaid reimbursement and racial equity.

First, we highlight key facets of the policy environment:

We then emphasize three key considerations: voice, decentralization, and disproportionality.

Voice sensitizes us to who is at the decision-making table, who is heard, and ultimately who has the power to influence policy outcomes. Medicaid reimbursement rates are a distant issue that may be more salient to actuaries than to the people most affected by decisions. Yet, it is critical to pay attention to the voices with the most at stake — Medicaid beneficiaries. Examples from our interviews show that even when beneficiaries don’t directly discuss reimbursement, they provide valuable perspectives about access and reimbursement rates:

Daphne (Black woman, New York): I just know a lot of doctors on Medicaid, they know you’re on Medicaid and it’s like, well, you guys are lucky we’re even taking this. They’re just not as gentle with you. They’re really short and they come in for five minutes to see you and have you waiting for an hour or even more. So, I feel like the service is not as good. If I was probably wealthier, it would probably be a lot different.

Lucy (Black woman, Georgia): There’s a difference as far as people with private insurance. I think they get treated more; I think they get treated better. . . . It’s more time with the visit. . . . Whereas with Medicaid it’s like okay, you are on Medicaid, it is what it is, this is the only medicine I can give you. Let me hurry up and see you and get out.

Decentralization concerns the level of government through which a policy is designed or implemented. As in our Washington State example, decentralization of the Medicaid system added an additional layer of complexity for advocates concerned with the access-to-care issues of below-cost reimbursement rates. The Washington network of actors was forced to engage federal institutions to change state policy. Decentralization can be — but is not always — detrimental to racial justice efforts. 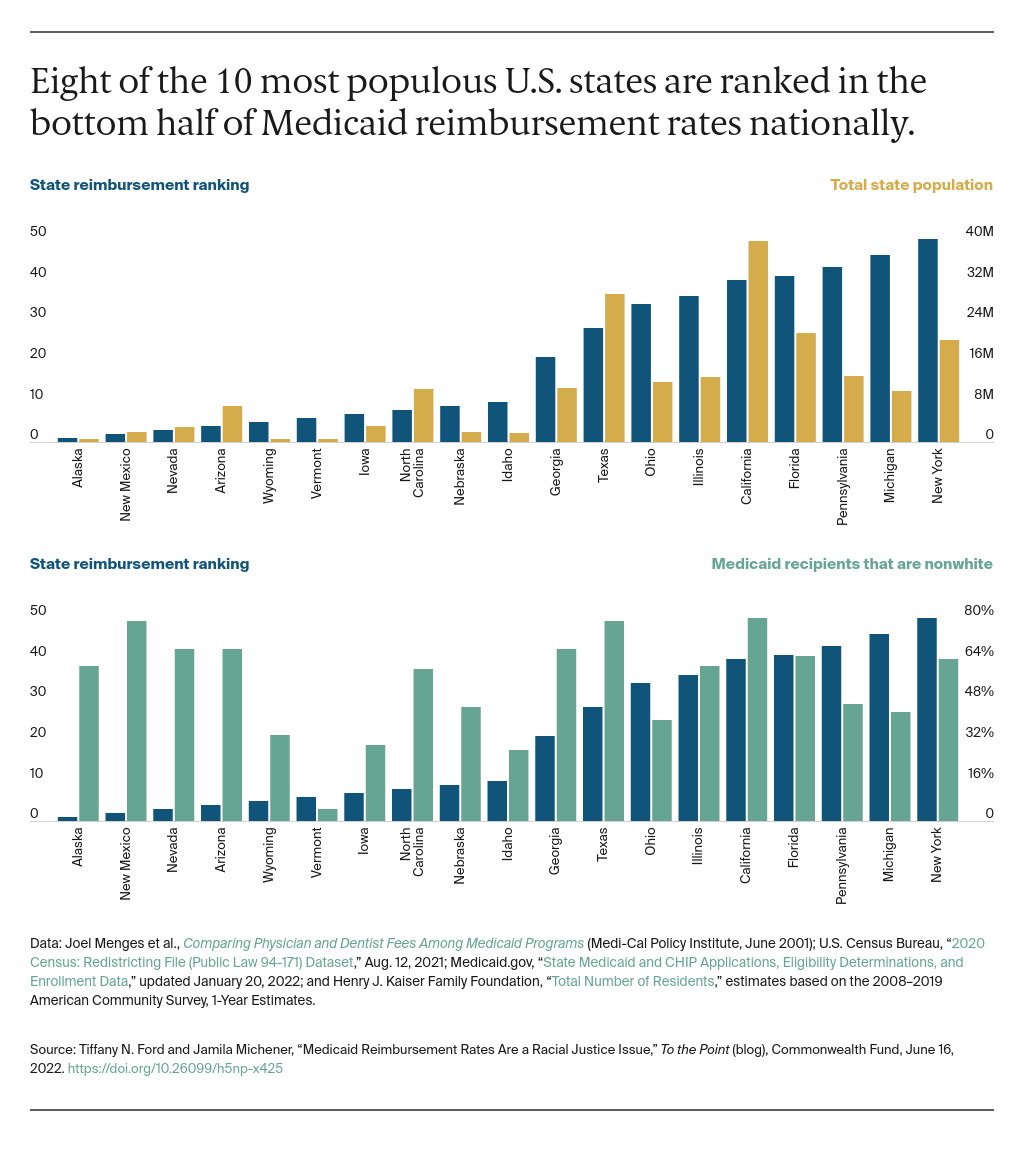 The policy dimensions and core considerations surfaced here sensitize us to some of the institutional conditions that shape inequitable Medicaid reimbursement policy. Policymakers and analysts faced with choices about Medicaid reimbursement (or other policy with equity implications) can use the full REAP framework to deepen and advance thinking about the structural bases of racial inequity in health policy. They might begin by identifying the aspects of the policy environment (see Exhibit 2 in full framework) that are most relevant to their specific policy choice, paying close attention to two or three salient dimensions. Then, for each dimension, they can probe the relevance of voice, decentralization, and disproportionality in relation to racial equity (see Exhibit 3 in full framework). By analyzing a policy through these specific lenses — and asking difficult but easily overlooked questions — policymakers can take more intentional and thoughtful step toward advancing racial equity in health policy. 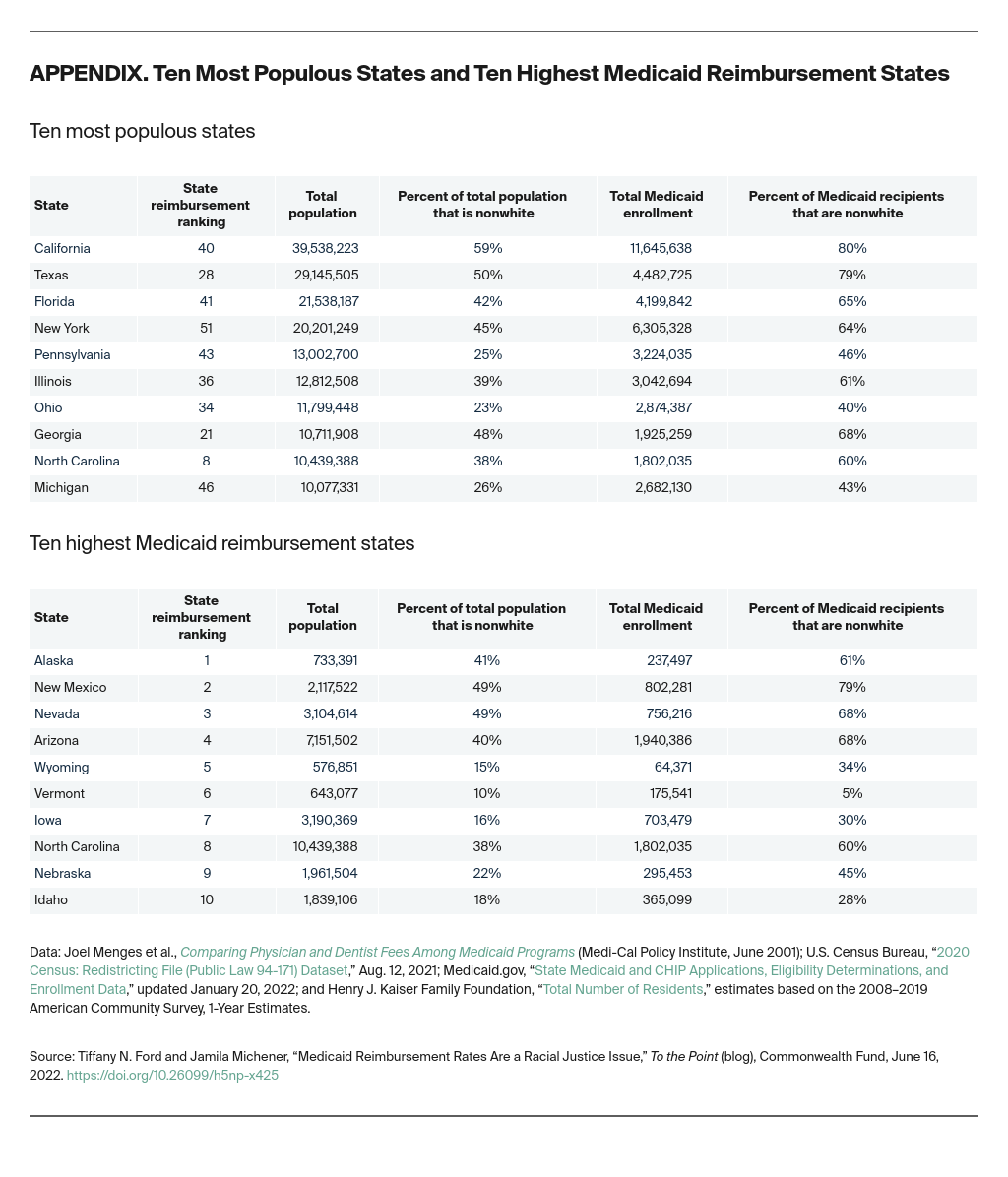