The EO reinforces many of the steps already taken by the Biden administration and signals potential additional options, such as efforts to protect patient privacy. While pro-choice advocacy groups and other supporters of abortion rights have continued to weigh in on what a more robust federal response could include, ultimately the Biden administration’s policy options are limited. The executive actions detailed in the EO will face legal challenges and can quickly be undone by a new president. Congressional action is needed in order to ensure permanent and continuous nationwide protections for access to comprehensive reproductive services.

What’s Included in the EO

In brief, the EO includes directives intended to:

Additional details are included in the table below. 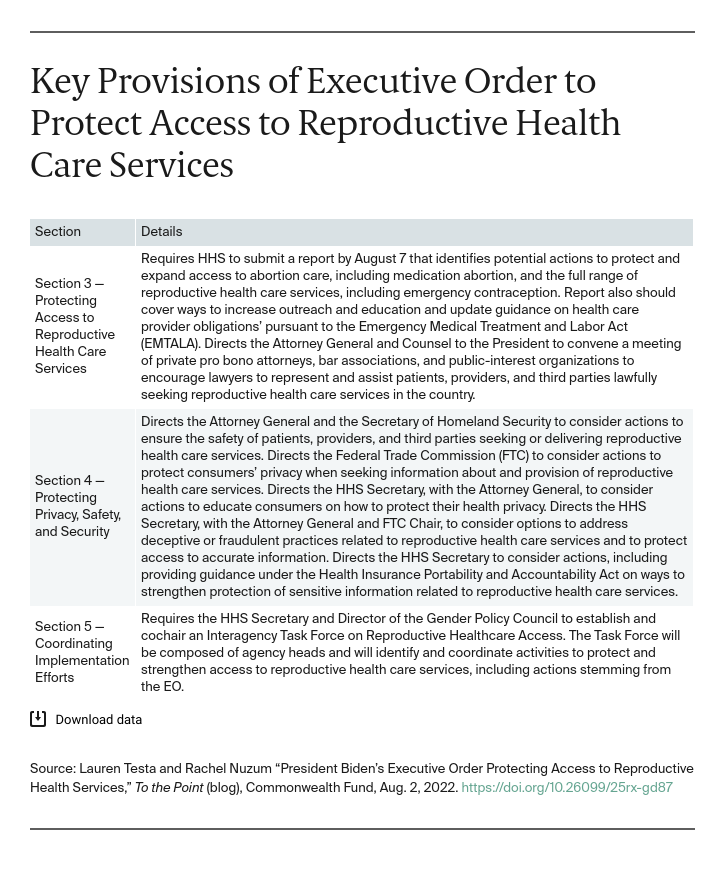 Since the release of the EO on July 8, the administration has begun taking steps to implement its directives and clarifying that federal laws and policies override state limits on abortion. The Centers for Medicare and Medicaid Services’ (CMS) Maternity Care Action Plan details several of these steps. For example, to ensure abortion can be provided in emergency situations, recent guidance affirms that EMTALA — a federal law requiring hospital emergency departments to stabilize and treat all patients regardless of their ability to pay — permits providers to perform an abortion when a patient presents in an emergent condition. This guidance has already been challenged with a lawsuit filed by Texas Attorney General, Ken Paxton. HHS also has sought to protect consumer access to abortion medication through guidance that asserts retail pharmacies that receive federal funds (e.g., those that participate in Medicare and Medicaid) cannot deny access to reproductive health care services under certain nondiscrimination requirements under section 1557 of the Affordable Care Act. Retail pharmacies affiliated with a covered education program or activity also may not discriminate on the basis of sex under Title IX of the Education Amendments of 1972.

Pro-choice advocates have suggested additional administrative actions to limit the adverse impacts of the Dobbs decision on patients. One option is declaring a reproductive health public health emergency (PHE), which could allow the circumvention of state-level abortion restrictions. The effectiveness of such a strategy is uncertain; in some cases, federal policies implemented in response to the COVID-19 PHE were contested by state governments and overruled. Other ideas include expanding access to medication abortion by loosening or removing the risk evaluation and mitigation strategy (REMS) restrictions for mifepristone and allowing for the use of telemedicine to prescribe medication abortions.

Ultimately, the EO and other suggested policies provide a patchwork solution at best and will not fully offset the impact of the Dobbs decision. As detailed elsewhere, legal challenges, including those to the policies and guidance that flow from the EO, will persist, and many pregnant individuals will go without needed care while these issues make their way through the courts.

Congressional action will be essential to ensure access to a full range of reproductive health services nationwide, including access to contraception and abortion, but is unlikely to advance in the current Congress. While the House has recently held two floor votes on bills to protect abortion access — the Women’s Health Protection Act of 2022 (H.R. 8296) and the Ensuring Access to Abortion Act of 2022 (H.R. 8297) — a path forward is highly unlikely in the evenly divided Senate and could be even more out of reach in November, depending on the outcome of the midterm elections.

Despite strong public support (between 85% and 90%) for abortion to remain legal in some or all cases and the overwhelming data showing the adverse health impact of restricting access to abortion and other reproductive health services, there is no clear evidence that this issue will meaningfully influence who voters support in the upcoming midterm elections. While enthusiasm for voting in the midterms has increased among Democrats, polls consistently show the economy is the most important issue to voters across the political spectrum. Given historically high inflation and low presidential approval ratings, congressional Democrats are not likely to generate enough momentum to legislate on abortion access in the face of other pressing priorities ahead of the midterm elections. In the absence of a clear path forward to safeguard reproductive rights legislatively, President Biden’s executive order offers a roadmap for how his administration will implement the modest protections it believes it can provide.