When President Biden took office, he vowed to reverse many of the Trump administration’s regulatory measures that were widely seen as weakening the Affordable Care Act’s (ACA) reforms of the private health insurance market. These efforts have succeeded on several fronts, but one Trump-era measure remains untouched: the expansion of short-term health insurance.

The ACA’s market reforms and consumer protections do not apply to health insurance coverage that is not comprehensive. This includes short-term plans, designed to provide temporary coverage during transitions. Federal rules initially restricted the short-term market to nonrenewable plans lasting no more than three months. Starting in late 2018, the Trump administration changed this, allowing states to approve short-term plans for up to 364 days and renew them for up to three years.

Independent analysts were concerned that such a substantial expansion of short-term coverage could weaken the ACA-regulated market. Short-term coverage is not community-rated (that is, people can be charged more based on their health status, gender, or other factors) and it typically does not cover preexisting conditions. Its lower price makes it especially attractive to healthy people. Analysts predicted that short-term plans would not simply be covering people who otherwise would be uninsured, but also would draw people out of the ACA-regulated market. Doing so would weaken that market by affecting the risk pool and deny subscribers important protections, often without them being fully aware.

Despite these concerns, the Trump-era measure remains in place, with short-term plans now covering several million people. As shown here and here, about half of states allow insurers to offer short-term coverage lasting almost a year. About a quarter of states restrict short-term plans to a half year or less, and 10 either ban them or impose sufficiently tight controls that none are sold there. This diversity of experience provides an opportunity to measure how increased enrollment in short-term plans initially affected the ACA market.

We used the “risk score” that the federal government calculates to measure the relative medical costs expected for the populations covered by ACA plans in each state (both on and off the subsidized exchange). Changes in these risk scores indicate whether enrollees in regulated plans are, on the whole, becoming more or less likely, in the eyes of actuaries, to incur medical expenses.

The table shows that after one year under the more lenient rules, although ACA markets did not collapse, worrisome trends emerged. Nationally, the average risk score for enrollees in ACA-compliant plans improved by 9 percent in 2020, likely because of the sudden reduction in expensive procedures during the COVID-19 pandemic. Notably, this improvement was substantially greater in the states that either banned short-term policies or limited their duration to six months or less. In those states, risk scores declined almost 40 percent more than in less restrictive states (11.4 % versus 8.3%), indicating that they lost substantially fewer healthier people to short-term plans than did states with more permissive rules for short-term plans. Because the more restrictive states were able to keep a greater proportion of healthier people in the regulated market, they experienced a greater decline in the medical costs that drive insurance premiums. 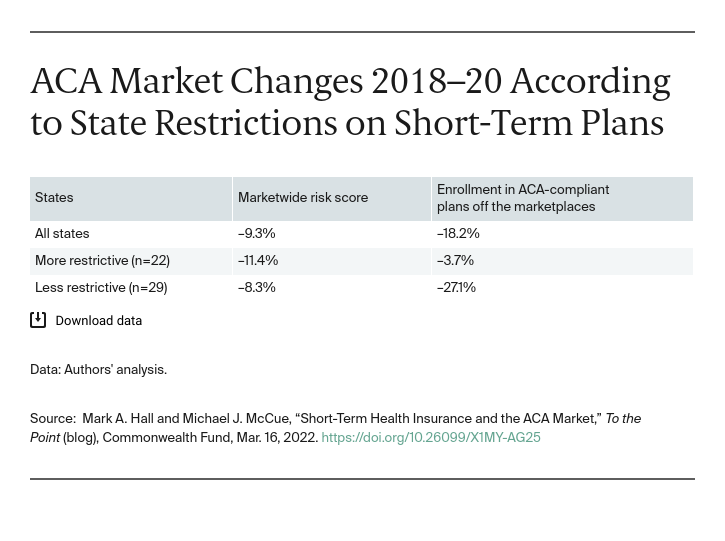 Although other factors, such as differences in open-enrollment rules and outreach and marketing efforts, might also contribute to this risk-score difference, it is consistent with predictions that expanding the number of short-term plans would draw healthier people out of the regulated market. If that trend were to continue, it could accelerate, producing more significant harm to the ACA market.

When healthier people leave an insurance market it drives up average medical costs, which can increase premiums. People who receive premium subsidies on the ACA exchanges are somewhat cushioned from premium increases. However, others bear the full brunt of these increases. Accordingly, the expansion of short-term coverage can be expected to draw more from the “off-exchange” portion of the ACA-regulated market because that is the portion of the regulated market where short-term plans have the greatest premium advantage.

Confirming that logic, our analysis found that states that allow short-term coverage to last nearly a year saw a 27 percent reduction in enrollment in ACA-compliant plans not offered through the exchanges. By contrast, there was a reduction of enrollment in such plans of only 4 percent in states that either ban short-term plans or restrict them to six months or less. This sharp drop is an important “canary” in the coalmine of the ACA-regulated market.

The American Rescue Plan Act will provide some people temporary respite from high premiums by expanding who is eligible for premium subsidies. Congress is considering extending this assistance beyond 2022, but even if it does, keeping ACA-regulated premiums in check will remain critically important both for consumers and for government costs. One way to help do so is to adopt rules that restore a sensible demarcation between genuinely exempt short-term coverage and coverage that mimics, but falls well short of meeting, the full set of protections that Americans have come to expect from comprehensive health insurance.