Instead of pursuing traditional “public option” plans funded and administered by the government, several states are taking an alternative approach. These states — Washington, Colorado, and Nevada — call on private carriers to offer new public option-style plans that meet certain heightened requirements aimed at advancing particular state goals. For example, all three states require public option-style plans to contain costs, either through caps on aggregate payments to health care providers or by reducing premiums by state-set thresholds. 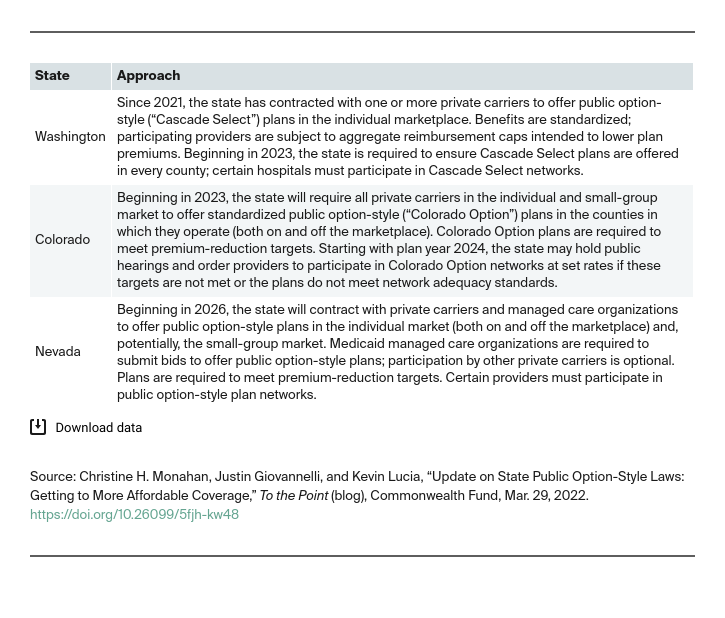 Washington was the first state to enact a public option–style law. It has faced challenges balancing the program’s multiple goals in the midst of the pandemic. The public option-style (“Cascade Select”) plans initially were offered mostly in counties with more competition and relatively low costs, making it easier for plans to meet the state’s provider reimbursement limits without driving down premiums. Indeed, the Cascade Select plans generally charged higher premiums than did competitor plans and did not attract substantial enrollment, although consumers’ automatic re-enrollment in preexisting plans likely played a role, too. But there was a glimmer of hope: when Cascade Select plans were offered in less-competitive, higher-cost counties, they had the lowest premiums.

In light of difficulties in its first year, Washington made several revisions for 2023. The state currently is preparing rules regarding how the Health Care Authority (HCA) will enforce the state’s new requirement that certain hospitals must contract with a public option plan. A preliminary draft released in December would establish a process for HCA to investigate potential noncompliance and issue financial sanctions against hospitals that fail to accept valid contract offers from public option plans. Washington also released a preliminary draft policy for providing subsidies to enrollees in Cascade Select and other standardized plans and indicated that it would “strengthen” its carrier procurement process to ensure statewide availability of Cascade Select plans with robust provider participation and lower premiums than competitor plans.

Colorado Prepares to Launch its Public Option-Style Plans Next Year

Colorado will be launching its public option-style (“Colorado Option”) plans in 2023. Carriers must offer Colorado Option plans in each county where they operate and meet increasingly stringent premium-reduction targets between 2023 and 2025. If carriers can’t meet these targets or the law’s heightened network adequacy requirements for Colorado Option plans, the Insurance Commissioner can order health care providers to join the plan networks at set reimbursement rates (within statutory limits that ensure these rates are adequate) following a public hearing.

To implement the new premium-reduction targets, Colorado asked the federal government to approve an expansion of its Section 1332 innovation waiver. The state estimates that these premium reductions will generate substantial federal savings over time, which can be passed to the state under the expanded waiver. If the waiver is approved later this year, Colorado will use these “pass-through” funds to make coverage more affordable for individual market enrollees, including those ineligible for federal premium tax credits.

With its public option-style plans not scheduled to launch until 2026, Nevada is moving at a more deliberative pace than Washington or Colorado. This winter, Nevada held a series of stakeholder meetings on design considerations, addressing topics like populations to target, ensuring plans and providers agree to fair rates, and whether the public option should be open to small employers in future years. After considering the public’s input, Nevada is preparing a Section 1332 waiver application.

Washington and Colorado have laid important building blocks for their public option-style programs, but they, along with Oregon and Vermont, which are in more preliminary stages, still have much hard work ahead. In particular, it will be critical to bring health care providers to the table while containing costs and ensuring affordable plans are available statewide.