Many Adolescent Boys At Risk For Serious Health Problems

Recent violence by teenage boys in the nation's schools has focused attention on why these adolescents developed such extreme behavioral problems. A recent survey points to one potential reason: a high percentage of boys have experienced violence themselves. According to a recent Commonwealth Fund survey, 13 percent of all high school boys have been physically or sexually abused, and 22 percent have wanted to leave home at some time because of violence or the threat of violence. 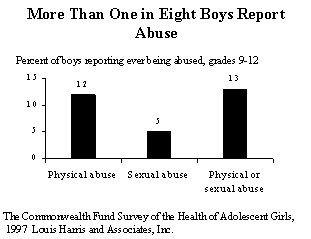 The Health of Adolescent Boys: Findings from a Commonwealth Fund Survey is based on a nationwide survey of 3,162 boys in grades five through twelve conducted for the Fund by Louis Harris and Associates, Inc. The report raises warning signs about hidden health risks and potentially serious long-term consequences. "Today's teens often find themselves in the news—but all too often because problems that have gone unnoticed turn into tragedy," said Karen Davis, president of The Commonwealth Fund. "The challenge to policymakers, health care providers, health plans, communities, schools, and parents is to provide more effective support in the form of a responsive health care system attuned to adolescents' needs, including mental health services." Troubled Youth Lack Support
Many abused boys reported that they often kept the problem to themselves: nearly half (48%) said they had not talked to anyone about their abuse, and only 7 percent had discussed the abuse with their physicians. In addition, all the boys surveyed indicated they felt isolated in terms of support: they were much less likely than girls to turn to someone for help when feeling overwhelmed, stressed, or depressed. Boys with severe depressive symptoms were particularly unlikely to turn to someone for help: four in ten reported that there was no one to turn to. Abuse Often Linked to Depressive Symptoms 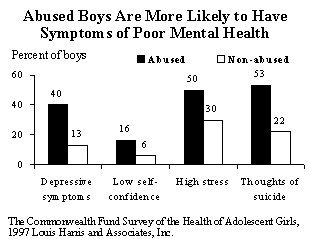 The survey also found that abuse and violence are associated with harmful behaviors and signs of poor mental health. Abused boys were twice as likely as non-abused boys to report smoking, drinking, using drugs, and more than three times as likely to report symptoms of poor mental health, such as signs of depression, low-self esteem, and thoughts of suicide. Forty percent of boys reporting abuse showed depressive symptoms. In fact, an alarmingly high number of abused boys reported thoughts about suicide: 15 percent said that they wanted to kill themselves, nearly double the rate of abused girls (8%), and more than half had thought about suicide. "Mental health services are critically important for adolescents, and we as a society are not doing a good job in addressing this need," said Davis. "Schools do not identify troubled youth or provide sufficient counseling services, and mental health services are inaccessible to adolescents. These services aren't targeted towards teens, and managed care does not do a good job of providing access to mental health specialists." Boys Experience Serious Barriers to Health Care 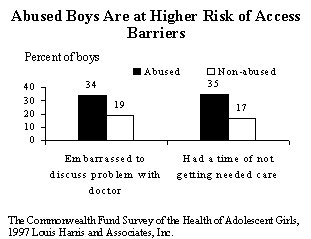 In addition to these problems, many adolescent boys are not getting the physical health care they need: one in five reported not getting care, and 28 percent said that confidentiality concerns—not wanting their parents to know—was the reason. Many also reported financial barriers to obtaining health care. Abused boys were at higher risk of not getting health care, with over one in three reporting they did not get care. Abused boys were also much more likely to have difficulty discussing a health problem with a doctor, with one in three citing embarrassment as the reason. "Adolescents must be included in the health care system," said Cathy Schoen, the Fund's director of research and evaluation. "We have to find ways to reach out to them, and to acknowledge that while most are doing well, many are in crisis. The real tragedy would be to ignore the opportunity to make changes."