New York City residents who do not have health insurance—more than one in four working-age adults (28 percent) and one in six children (17 percent)—often do not get needed health care, despite the city's vast medical resources. A new survey released today by The Commonwealth Fund offers the first in-depth examination in over a decade of the health care experiences of New Yorkers, who live in the shadow of some of the finest medical centers in the world. The Commonwealth Fund Survey of Health Care in New York City, released today at a briefing co-sponsored by The United Hospital Fund of New York, was conducted by Louis Harris and Associates, Inc., from October 1996 through March 1997, and included some 4,000 people. The survey reveals that New Yorkers without insurance are much more likely to be faced with barriers to health care, medical bill problems, and lower quality of health care, than are those with insurance. Fully three-quarters of all uninsured New York City adults are members of low wage working families. "New York City's health care system is known internationally for its excellent medical centers," said Karen Davis, president of The Commonwealth Fund. "Yet, New Yorkers themselves are at high risk of not getting the care they need as a result of being uninsured. Many low wage jobs in the city do not provide benefits, and working families simply cannot afford health care coverage. Living down the street from one of the finest hospitals in the world doesn't guarantee that your children will be immunized or that your health needs will be met." New York City Uninsured Rates Far Exceed National Average Adults ages 18 to 64 in New York City are 50 percent more likely to be uninsured than adults of the same age in either New York State or the nation, and they are far less likely to have insurance through their jobs: 63 percent of working-age adults nationwide have health insurance coverage through their own or their spouse's employer, compared with only 44 percent of New York City working-age adults. A key reason is that many jobs in New York's retail, service, and entertainment sectors do not provide health benefits.

Medicaid is an important source of insurance coverage for low income New Yorkers, especially for children in low income families and for non-working adults. The working poor, however, often fail to have any coverage and face serious barriers to obtaining needed care. "The erosion of employer-based coverage in New York City is particularly troubling," said Davis. "We cannot rely on lower unemployment rates to solve the health care crisis or assume that private insurance will be there for people who work. We need to look at ways of making health insurance affordable for working families." Consequences of Being Uninsured The survey indicates that being uninsured is strongly linked to problems with obtaining access to health care: uninsured New Yorkers are two to three times more likely to have difficulties getting access to care (53 percent vs. 14 percent) and to report not getting needed care (19 percent vs. 7 percent) than the insured. Access to preventive care is also dependent on insured status: among uninsured adults ages 50 to 64, 75 percent of men had had no prostate exam and 58 percent of women had had no mammogram in the past year; for the insured population, the figures are 41 percent and 33 percent, respectively. Based on patient reports, satisfaction and quality of physician care also appear to be strongly linked to insurance status. More than twice as many uninsured working-age adults in New York City rated their health care overall as fair or poor as did insured working-age adults (39 percent vs. 19 percent). And twice as many uninsured working-age adults gave low ratings to how much their doctors care about them as did insured working adults (29 percent vs. 14 percent). New York City has among the highest health insurance premiums and medical costs in the nation. As a result, the survey finds that New Yorkers are struggling to pay medical bills—especially when they are uninsured. Nearly one-third (31 percent) of uninsured adults said their families had problems paying medical bills in the last year, as did more than one in ten (13 percent) of the insured in New York City. 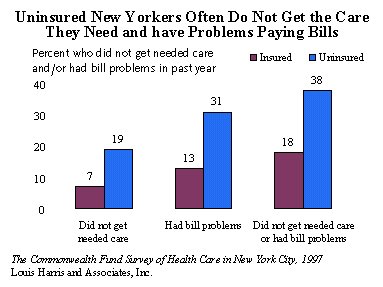 "Being without coverage has serious consequences for New Yorkers' access to even basic preventive health care—and for the quality of care they receive," said James R. Tallon, Jr., president of the United Hospital Fund of New York and a board member of The Commonwealth Fund. "We must come up with long-term solutions for reaching out to working families, or we will continue to place the health of millions in New York City at risk." New York City's Public Hospitals Are Crucial to Health Care A significant finding of the survey is the extent to which uninsured New Yorkers rely on public hospitals and emergency rooms for health care. Nearly half (48 percent) of New York City's uninsured who had been hospitalized overnight had stayed at a public hospital. Because of this network, uninsured New Yorkers fare somewhat better in obtaining access to health care than do those nationwide. Nationally, 30 percent of the uninsured reported they did not get needed medical care, while only 19 percent of uninsured New Yorkers said they did not get needed care. The survey also reveals widespread support for the city's public hospital system—58 percent of all those surveyed said that selling or closing the city's public hospitals would be a bad thing. Uninsured New York City Children Lack Access Children in New York City are also disproportionately affected by lack of insurance: one in six (17 percent) children in the city is uninsured. Lack of coverage was strongly linked to decreased access to health care: while nearly three in ten (29 percent) uninsured children had not had a check-up or immunization in the past year, only 13 percent of insured children had not had a check-up or immunization. Most uninsured children in the city live in two-parent, low wage working families. New Yorkers Living in Poverty Are at Highest Risk The survey finds that problems with health care access and paying medical bills are linked strongly to low incomes. While 44 percent of poor working-age adults said they had not gotten needed medical care and/or had had a problem paying medical bills, only 34 percent of those above 250 percent of the poverty level reported such problems. The connection between income and access is also reflected in the disparity between the health care coverage and access experiences of New York City minorities compared with the white population. While 28 percent of black and 38 percent of Hispanic working-age adults reported difficulties getting needed medical care, only 19 percent of white working-age adults reported such difficulties. "Clearly, New York City does not lack health care resources," pointed out Cathy Schoen, director of research and evaluation for The Commonwealth Fund. "We have to find ways of reaching out to the working poor. Recent proposals to expand child health coverage are a step in the right direction, but we need to reach the entire family."